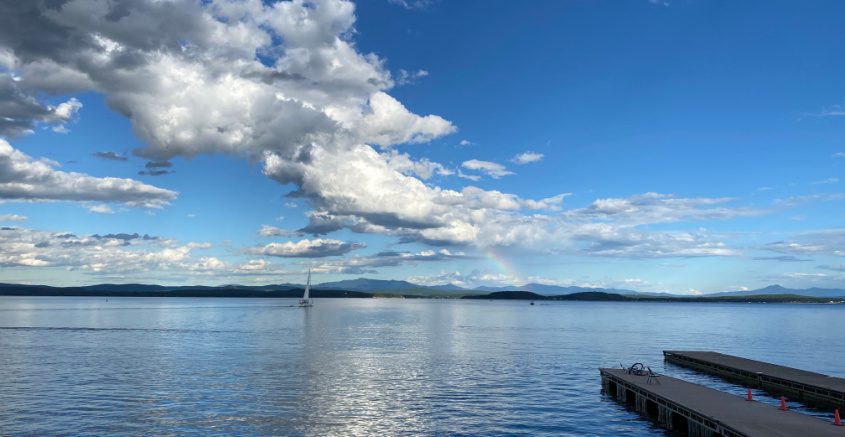 Whether you’re someone who likes to swim, sunbathe, paddle, fish, water ski, boat, camp, hike or even are just historically minded, Lake Champlain has what you’re after. As the Adirondacks’ largest lake, it’s a veritable playground for all people of all ages, with some 200-odd miles of “unspoiled shoreline” to boot.

Hoping to get in touch with nature, get active and sweat it out? Check. Seeking some rest and relaxation, or lakeside views with a side of brews? Check. Hoping to step back in time? Check.

Straddling New York state and Vermont, with the tip sitting just across the Canadian border in Quebec, Lake Champlain is roughly a two-and-a-half-hour road trip from the Albany area. In addition to mountain views and excellent waters for fishing, the lake will forever be known for a few memorable reasons: as home to the oldest known fossil reef in the world (estimates suggest it’s between 450 million and 480 million years old) and its resident namesake monster; and also as the lake whose title of “Great” was stripped after just 18 days.

TO BE OR NOT TO BE (GREAT)
In 1998, a Vermont senator made a creative adjustment to the phrasing of a bill effectively reclassifying Champlain as a Great Lake in order to make it eligible for federal funding. Without anyone noticing, then-President Bill Clinton soon after signed the bill into law before public outcry followed, as many considered Champlain far too small to deserve such an honor given to fellow lakes 15 times her size or more. Regardless, the title was dropped and Champlain was deemed a “cousin” to her fellow Greats, therefore ensuring she would still be eligible for federal funding.

ISLE LA MOTTE AND THE CHAZY REEF
In the late 19th century, limestone from this particular quarry was sent south and used in countless memorable structures and buildings in New York City and Washington, D.C.—but truth be told, the limestone itself was also memorable. Riddled with marks, swirls and dents that were eventually identified as fossils, the quarry is now off-limits and preserved as evidence of life dating back almost 500 million years.

Described as the “best place to see one of the oldest reefs on earth” by Smithsonian Magazine, Isle La Motte is also a remarkable geological feat. The Chazy Reef was actually once located in the Southern Hemisphere, which allowed such flora and fauna to bloom and grow, but tectonic plate movement shifted it north a quarter of a billion years ago and that’s where it sits today, in the middle of Lake Champlain. In fact, portions of the reef have been located as far north as Newfoundland and as far west as Tennessee, but they don’t have as much visible fossil presence as the Chazy Reef.

CHAMP
While Scotland has Nessy, the Loch Ness Monster, Lake Champlain has Champ—its own version of the famous sea monster/sea dragon/sea snake/large-scale garfish or however you choose to imagine it. Legend and lore abound, but the Iroquois and Abenaki told stories of a large, horned serpent which resided in the lake, which the latter called the Gitaskog. They warned others, possibly even Samuel de Champlain, the French explorer for whom the lake is now named, about the creature. In fact, some accounts say Champlain saw the monster with his own eyes, describing “scales of a silvery gray colour and so strong that a dagger could not pierce them” in 1609.

Sightings continued well into the 19th and 20th centuries, but always with varying detail. An account from Captain Crum published by the Plattsburgh Republican in 1819 described the creature as black with a seahorse-like head and some 200 feet long, but a New York Times piece in 1873 said a railroad crew had seen the “enormous serpent” and that it had silvery scales. A steamship even claimed the creature nearly capsized it that same year.

According to some reports, Champ has been sighted 200-plus times. P.T. Barnum even offered a $50,000 reward for its “hide” decades ago, hoping to put it on display. Perhaps that’s why Champ is now legally protected in both Vermont (thanks to a special House resolution passed in 1982) and New York (passed in 1983).

Although sightings continued throughout the 1980s, 1990s and as recently as 2005 — and on video, nonetheless! — the jury is still out, meaning you can review the “evidence” and decide for yourself. Just make sure to check out what may in fact be the most famous image of Champ to date, one snapped by Connecticut resident Sandra Mansi in 1977 while on vacation. If your interest is sufficiently piqued, it deserves mentioning that sound recordings from the Fauna Communications

Research Institute in 2003, working in conjunction with the Discovery Channel, captured sounds which are scientifically similar to the echolocation sounds produced by select whales and dolphins — although neither of these mammals call this lake home.

Never fear: There’s an epic-sized, winding sculptural version in Port Henry in case you’re hoping to ensure your own sighting or snap the perfect photo for yourself.

INTERESTED IN VISITING?
Whether you’re planning a day trip, an overnight or a weeklong stay, here are a few activities and events in and around Lake Champlain this summer that are worth a look.

TRY THIS FAMILY-FRIENDLY, 36-HOUR ITINERARY
Saturday: Jump in the car and hop on the Northway for a roughly two- to two-and-a-half-hour journey (depending on where in the Capital Region you call home) to Ausable Chasm.

With no reservations required to enjoy most of the adventures for which Ausable is known, you can hold out and easily plan when the forecast for the week ahead looks solid and sunny.

Opt for something classic by taking their signature 30- to 45-minute riverwalk tour, during which you’ll literally descend into the chasm and see the riverbed and rainbow falls, all while learning about the geological formations.

The guided raft float tour is another must-see with an easygoing feel, although older kids may prefer river tubing instead.
Feeling a bit braver? Take the Adventure Trail — billed as something between hiking and rock climbing — and see the sights from inside and around the chasm, courtesy their via ferrata system in which you’re harnessed and attached to a protected cable system as you trek through this guided tour.

Make a real day of it, then hop back in the car for a quick 10-minute drive to Livingood’s Restaurant & Brewery in Peru to enjoy a late-afternoon bite and brew. With a wide menu including burgers and tacos, poutine, pizza and pasta, you’ll find something to please everyone in your party, but make sure you try their MVP Maple-Vanilla Porter or their Chasm Cream Ale if you’re of drinking age.

Next, head to one of several nearby campgrounds in Peru (note, you’d likely want to plan this portion ahead and make a reservation) such as Ausable Point Campground, which is right on the lake itself for a night under the stars. Tent and gear required of course, although restrooms and hot showers are on site. Don’t forget to pack supplies for s’mores.

Sunday: Pack up your gear and make the roughly one hour and 20-minute drive south (good news: you’re headed in the direction of “home”) toward Fort Ticonderoga, stopping to grab breakfast at any spot along the way that catches your fancy. Once at the fort, plan to take it all in — from the exhibitions to the garden to the demonstrations — but make sure you head to Mount Defiance for a memorable, Instagrammable view.

No trip would be complete without spending time on the lake itself, assuming you’re able to snag a seat on one of the Carillon Boat Cruises departing at 1 or 3:30 p.m. from the fort (or perhaps you’re able to plan ahead and buy advance tickets). Make it an easy day and spend as much time enjoying the sights as you’d like before heading out for the roughly one hour and 45-minute drive back to the Capital Region.

Lake Champlain
ORIGIN OF NAME: The lake was given its name in 1609 by French explorer Samuel de Champlain.
FUN FACT: Lake Champlain is the largest of the lakes in the Adirondacks.
LOCATION: Crossing the border into Quebec, Canada, Lake Champlain straddles Clinton and Essex counties in New York state on its eastern side, and Vermont on its western side.
SIZE: 124 miles long, 400 feet deep at its maximum depth
CLAIM TO FAME: Champ, the Lake Champlain Monster
WHERE TO SWIM: Lots of great public swimming spots on the New York state side of the lake, including Ballard Park Town Beach in Westport, Plattsburgh Beach in Plattsburgh, Port Douglas Beach in Chesterfield and Port Henry Beach in Port Henry.
WHERE TO LAUNCH: With 13 boat launches in New York state and another several dozen in Vermont, options abound, but safe bets include Willsboro Bay Boat Launch and Ticonderoga Boat Launch.
LAKESIDE DINING SPOTS: Chez Lin & Rays in Essex serves fresh seafood and local produce; Splash at the Boathouse in Burlington, Vt., offers full-service dining as well as “grab ’n’ go” meal options and ice cream in case you’re hoping to picnic or stroll.

More from The Daily Gazette: