Home Cryptozoology News The Pacific Northwest Is Crawling With Cryptids, and Not Just Bigfoot. Here’s... 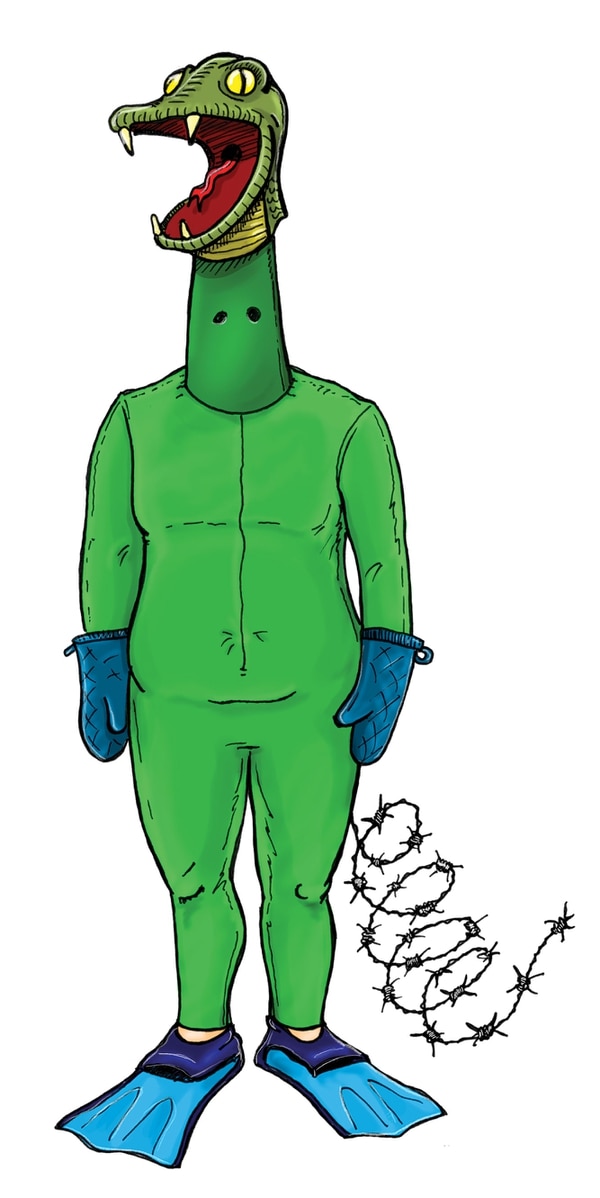 Oregon is a frightening place.

The woods are remote. The waters are murky. It’s dark and gloomy most of the year. When you travel beyond Portland city limits, and into the true wilderness of the state, who knows what’s lurking out there?

From river serpents to flying werewolves, the Pacific Northwest is a hotbed for all manner of strange beings—and not just Bigfoot.

Related: We Went Looking for Sasquatch in Portland. He Wasn’t Hard to Find.

Stories of other so called cryptids—creatures of dubious origin not confirmed to exist by science—have captivated Oregonians for centuries.

So given that it’s Halloween, we wanted to introduce you to some of the region’s lesser-known megafauna. And, because ’tis the season, we’re giving you a guide for DIYing your own last-minute Oregon cryptid costume.

First reported by crew members aboard the Columbia Lightship in 1934, Colossal Claude is a river monster once spotted at the mouth of the Columbia River. According to a member of the crew, the water serpent was roughly 40 feet long, with an 8-foot neck, round body, “a mean looking tail” and “an evil, snaky look to its head.” While the creature hasn’t been seen since the 1950s, another water-dwelling beast was supposedly caught on tape by Shell Oil workers on an oil-drilling expedition near Astoria in 1963. They dubbed it Marvin the Monster, although some insist it was none other than Claude.

• Long cardboard tube
(for the neck)

• Length of barbed wire
(for tail)

You might recognize Batsquatch from the label of Rogue’s hazy IPA of the same name. “While there are many tales of Batsquatch,” the brewery writes in its description of the beer, “they are all a bit hazy on the details.” First spotted in the 1980s near Mount St. Helens, the elusive winged humanoid is said to resemble a flying primate with leathery black wings that span up to 50 feet. In 1994, the Tacoma News Tribune detailed an alleged encounter by a teenager near Buckley, Wash. According to the report, the animal had clawed feet, blue-tinted fur, the face of a wolf and wings “as wide as the road.”

Who would’ve thought a place called Devils Lake would have a sinister history? Though it’s now a summer recreation area, the body of water gets its name from a tribal legend concerning an octopuslike monster said to inhabit the lake. According to the story, a Native American chief sent a party of warriors on a late-night hunting trip. Without warning, a mass of giant tentacles surfaced and capsized their canoe, dragging the men down into the murky depths.

Natural habitat: Pretty much all over the Oregon woodland

A bipedal werewolf-type monster, think of Dogman as the canine version of Bigfoot, only more menacing. Those who’ve encountered it—sightings have occurred in Albany and Klamath Falls, among other woodsy spots—report seeing a hairy creature with ears like a German shepherd and a long snout that stands about 7 feet tall and has a human face and torso. Others have described its appearance as some sort of hellhound, with red eyes, big teeth, and an evil grin.

Natural habitat: The forests of Oregon and Washington

It sounds like a forgotten Saturday morning cartoon character, but don’t let the cute name fool you. According to tales passed down by lumberjacks in the 19th and early 20th centuries, the Gumberoo is a football-shaped critter said to look like an obese bear, only completely hairless, with a bristly beard and tough, and leathery black skin that repels bullets. Gumberoos allegedly spend most of their lives hibernating in hollowed-out cedar trees, which means when they’re not sleeping, they’re ravenously devouring anything meaty and edible that comes along. Call it a “Scare Bear.”