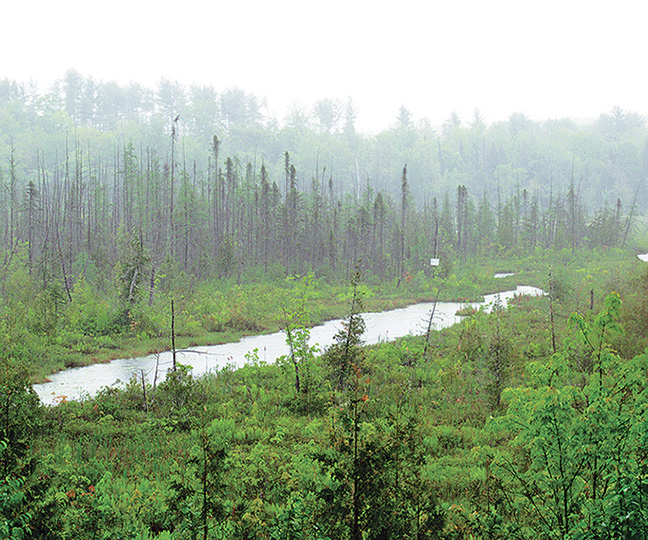 A report on UFOs released earlier this month by the U.S. Defense Department produced no crashed spaceships or extraterrestrial carcasses, but it didn’t rule out the possibility of extraterrestrial life. While it won’t do much for the debate over the existence of UFOs, the fact that the government did a public report is a victory for what has long been a fringe phenomenon. While we’re at it, should we be reconsidering Bigfoot?

Michelle Souliere’s new book “Bigfoot in Maine,” published last month by The History Press, digs into the legend of Bigfoot from a local angle, collecting first-person accounts from Mainers who saw, or believed they were in the presence of, a Bigfoot. While some of the encounters are vague at best, many are remarkable and several are surprisingly intimate. One woman describes how a Bigfoot taught her to swim.

Souliere, whose past projects include the cryptozoology-adjacent blog “Strange Maine,” got interested in the local Bigfoot lore around 2005 after coming across newspaper articles about local sightings. Following her natural curiosity, she spent the next several years digging into the topic before deciding to write a book.

The plan was to make a comprehensive sourcebook about the history of the Bigfoot phenomenon in Maine, she said. But when Daniel Green published “Shadows in the Woods: A Chronicle of Bigfoot in Maine” in 2015, she was forced to rethink the whole project.

“He basically replicated 90% of the work I’d spent all those years doing,” she said. What he hadn’t done, she realized, was interview people who had encounters in Maine, a group that turned out to be almost as elusive as the hairy hominoids themselves.

“A lot of them I found because they posted just a little short comment somewhere online, mentioning that they’d had an encounter in Maine.” Others came from referrals along the way. Many had kept it a secret, only years later cautiously approaching a relative or a neighbor to ask, “Did you ever see anything weird around here?”

If you grew up in the United States, you probably already have a picture in mind of how a Bigfoot appears:

Bipedal, ape-like, covered in black or reddish hair, the height of a tall man or a very tall man, a loping gait, broad shoulders, not much of a neck, long arms, hands and, of course, feet.

The accounts collected in “Bigfoot in Maine” offer more details that are intriguingly consistent among many of the people who believe they crossed paths with Bigfoot. The eyewitnesses often reported that the hair was longer in the triangle between the head and shoulders. Those who saw a Bigfoot run said it covered distance in great strides and far faster than a human. People described “tree knocks” and roars or howls that were similar to those made by a gorilla or a gibbon. While many hightailed it out of the woods, just as many said they weren’t afraid. Later they often felt protective, as one would an endangered species. And likewise, Bigfoots were noted as being protective of children. On the stranger side, multiple eyewitnesses said the eyes of the Bigfoot glowed red at night as if lit from inside.

The consistency of descriptions could be taken as affirming the Bigfoot legend or just as easily as the opposite, an effect of the mind’s desire to make sense of the unknown. For all the stories from people who claim to have seen a bigfoot, no fossil records of a Bigfoot have been found, no bones, no DNA. Alleged hair samples always turn out to be something else extant and hairy — sometimes a horse, sometimes a bear. Hoaxes abound.

For scientists, the sheer lack of quality evidence is often held up as the best argument for why Bigfoot doesn’t exist. If it was out there, the reasoning goes, we would have found something by now.

“People have found traces,” Souliere said, “but it’s so difficult to get decent lab results. Most of the people who are involved in the field, they’re amateurs. It’s difficult to maintain the kind of conditions that would allow a specimen to remain uncontaminated, and to be properly analyzed in good time.” The cost of lab work is another barrier, she said.

Souliere holds out hope for the field of Environmental DNA analysis, or eDNA, in which the presence of animals can be detected from soil or water samples that they came into contact with.

For now, the legend continues on the strength of stories. As science goes, eyewitness accounts are essentially useless, but the witnesses interviewed by Souliere might fare well in court. Many had extensive experience in the woods prior to their run-in with a Bigfoot and had seen Maine’s large mammals in the wild. Often they went through a checklist before settling on the creature that is not supposed to exist.

Lynne Collett recounted her own dawning realization that the “something big behind the house” described to her by a boy she was babysitting was not a moose or a man. Long dark hair, longer-than-human arms: “Holy mother of God,” she thought. “I know what you are.”

People didn’t always have such a clear idea what they were seeing in the woods. Many of the early stories Souliere collects in a historical chapter involve descriptions of “wild men” or fantastical creatures colored by the imagination. In 1855, a Waldoboro man wrote to the Thomaston Journal to describe his sighting, capture and apparent adoption of an 18-inch tall “miniature human being” He concluded the letter saying:

“Whoever may wish to see this strange specimen of human nature, can gratify their curiosity by calling at my house in the eastern part of Waldoboro, near the Trowbridge Tavern. I give these facts to the public to see if there is anyone who can account for this wonderful phenomenon.”

Souliere thinks it was probably a spider monkey that traveled to Maine aboard a ship.

The mystery creatures described in newspaper articles became more apelike in the first half of 20th century.

The 1970s, backdrop of the earliest of firsthand accounts collected by Souliere, comes across as a kind of sweet spot for Bigfoot sightings. People had seen enough images to recognize an African primate, but popular culture wasn’t yet inundated with the paranormal.

“The people that experienced it then oftentimes didn’t even have a label to put on it until much later in their lives when they encountered some of the pop culture stuff, which sort of gave them an inkling of what they might have seen.”

When I asked Souliere about a standout among the interviews, she pointed to Mike Ledbury’s encounters between 1975 and 1978. After a few strange happenings and a face-to-face sighting, the teenage Ledbury, who comes across as woods-savvy and nearly fearless, studied the techniques of Dian Fossey and Jane Goodall and attempted to stake out the creature.

The beast he describes, like those of many Bigfoot sightings, resembles “Patty,” the creature from the 16 mm film shot by Roger Patterson in 1967 at Bluff Creek, California. The Patterson-Gimlin film is the source of the now-iconic image of a Bigfoot in mid-stride, looking back over her shoulder.

A few years later, the film “The Legend of Boggy Creek” used a similar-looking creature in dramatized accounts of the “Fouke Monster” menacingly (except for a minute in the middle of the film when a sad song plays about how lonely it must be) roaming the lowlands of its namesake town in Arkansas.

If Bigfoot isn’t a real creature, it owes its modern appearance to William Roe from 1957, who is generally credited with the first description of a hair-covered, ape-like Sasquatch.

The word Sasquatch, now a synonym for Bigfoot, comes from two decades earlier. The late journalist and bigfoot researcher John Green wrote that a teacher, John W. Burns, coined the term to describe what were “basically giant Indians.”

“They were called hairy giants, it’s true,” Green wrote, “but this was taken to mean they had long hair on their heads, something along the line of today’s hippies.”

The Bigfoot legend rests on the belief that the creature is an evolutionary cousin of Homo Sapiens, and biologically this isn’t out of the question. Other species of humans once shared the planet with ours, best known among them the Neanderthals. Fossil records of the Denisovans, our most recent known cousins, date to 50,000 years ago, not long in evolutionary terms.

Souliere sets the stage for the first-person accounts that make up the bulk of “Bigfoot in Maine” by describing how an unaccounted-for hominoid could hide itself away in Maine’s glacier-raked wilderness. “If any of you have spent time in Maine’s woods trying to spot birds, animals or a lost friend, you know how much the tree cover blurs outlines,” she writes. Like the Pacific Northwest, she says, Maine has plenty of water and wild food and supports several other large, reclusive mammals.

When Souliere visited the locations around Maine for her interviews and walked the woods where people claimed to have seen Bigfoot, she said she started to get a sense for the scale of the Maine wilderness, even in relatively densely populated parts of the state like the midcoast.

Likewise, her talks with eyewitnesses swayed her in a way that her historical research of newspaper articles hadn’t.

“They were all very straightforward. Nobody was looking for publicity,” she said. “Quite the opposite usually.” They feared ridicule.

Souliere said she was surprised how many were willing to talk with her, but the trust appears to be earned. She gives generous treatment to their stories, letting the gripping parts be gripping, while keeping enough academic distance to bring skeptics along for the ride.

Souliere has already started interviews for a second volume about Bigfoot in Maine and has her eye on a similar book devoted to ghost stories, with a combination of history and personal accounts.

“I feel like ghost stories are almost universal,” she said. “You can talk to people who don’t believe in ghosts whatsoever, or haunted houses, but oftentimes they will still have their own weird story of something that happened to them that fits in that category.”

Bigfoot sighting, perhaps because the category is so narrow and limited to certain types of places, are far more rare.

And what about UFOs?

“I would say they fall somewhere between ghost stories and Bigfoot,” she said. “I’ve talked to a lot of people who’ve had experiences … with lights, or something that looks like a physical craft or something like that, whether it was at a camp, out on their lobster boat, or, you know, just in their backyard. So I think there’s a funny little hierarchy.”