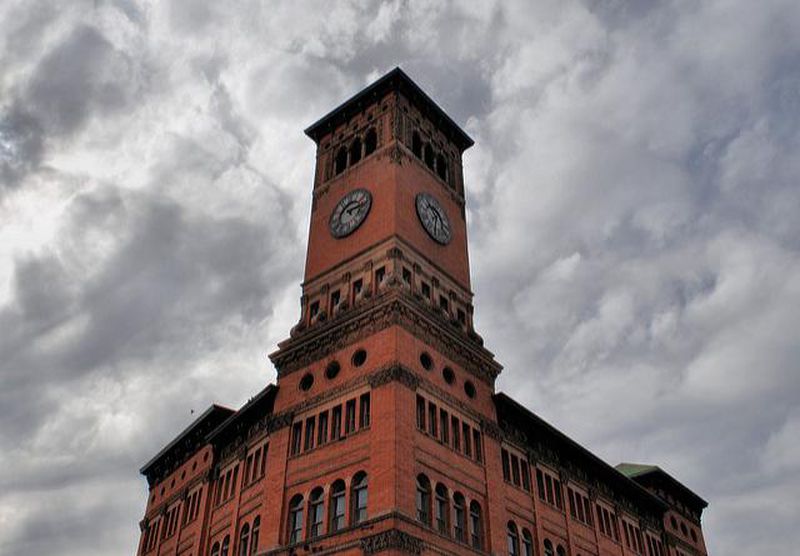 Here are the top five haunted places in Washington:

The 10-story bell tower on the Old Tacoma City Hall building in downtown Tacoma, Washington is rumored to be haunted. The bell has been known to ring late at night or early in the morning when no one is there.

Tacoma’s Old City Hall is a five-story Italian Renaissance-style building in downtown Tacoma, featuring a 10-story clock tower. It was finished in late April 1893 and was used as the seat for city government from the early 20th century until 1957. The building was saved from demolition in 1974 and placed on the National Registry of Historic Places.

Like many old buildings across the country, Old Tacoma City Hall has its share of stories, but some of those tales, whether true or an urban legend by now, border on the other worldly.

Explore>> Related: Florida’s most haunted landmarks and the terrifying tales about them

The bell tower is said to be haunted. The bell has been known to ring late at night or early in the morning, according to the website Haunted Places.

Since the 1970s, police have been called to the building on numerous occasions to investigate odd disturbances, according to hauntedrooms.com. Disturbances include lights flashing on and off, noises of unknown origin inside the building, and fire alarms and burglar alarms, but when police have responded there’s been no sign of attempted forced entry or anyone inside.

A view of the Old Tacoma City Hall. It was finished in late April of 1893 and was used as the seat for city government from the early 20th century until 1957.

Security guards have reported seeing “shadowy apparitions” and heard coughing outside the old council chambers when no one was there.

There’s also rumors about a ghost named Gus, who moves the building’s elevator up and down, and unlocks doors.

The 119-room Hotel Andra, located in the heart of Seattle, is a 10-story building that opened in 1926 as the Claremont Hotel. It has been remodeled several times and is still a functioning hotel.

Renamed the Hotel Andra in 2004, it’s “one of the premier luxury hotels in downtown Seattle,” according to the Andra’s website. Andra officials said the hotel provided efficiency apartments when it first opened, and acted as a transfer station for members of the Women’s Army Corps from 1945 to 1947. It was transformed into a small boutique hotel in the 1970s before opening as the Hotel Andra in 2004.

But one thing seems to have remained the same when it comes to the Andra: the ghost stories.

Staffers and guests have reported apparitions in the building, and are said to have witnessed objects moving on their own. One of the more common stories from guests involves the apparition of a woman who appears in guests’ rooms wearing 1930s-style clothing.

Hotel patrons have reported hearing jazz music and parties on the ninth floor, only for staffers to check and find nothing.

Perhaps the most widely told story of the Hotel Andra haunting happens on the building’s ninth floor.

The Hotel Andra is a hotbed of supernatural activity, according to ghost hunters and paranormal investigators. So if you’re looking for an other-worldly party, you just might find it at the Andra.

The Northern State Mental Hospital, now known in some circles as the Northern State Ghost Town, is located in the foothills of the North Cascades. The self-sustaining hospital complex, once the state’s largest facility for the mentally insane, or not so insane, sits on 1,100 acres and was operational from 1912 to 1973, according to the Washington Trail Association.

The complex was designed as a “self-sustaining and therapeutic colony for the mentally ill,” WTA said on its website. The site boasted patient and staff quarters, a lumber mill, a quarry, a greenhouse, a laundry, canning facilities and more. There was also a 700-acre farm, and the site had a cemetery where thousands of people have been buried.

The hospital closed in 1976, but some of its buildings are still in use as a drug rehab center and for job corps projects, the WTA reported.

According to some reports, patients died at the facility from all kinds of experimental treatments, including electroshock therapy, sterilizations and botched trans-orbital lobotomies.

The eerie remains of Washington State’s Northern State Mental Hospital is rumored to be haunted with apparitions and unexplained screams reported by unsuspecting visitors.

Investigators of paranormal activity have said the ghostly remains of the Northern State Mental Hospital are haunted.

Some of the documented paranormal activity include the apparition of a nurse pushing a patient in a wheelchair. Some visitors have reported seeing shadowy figures and others have reported hearing screams and voices.

Although occupied buildings at the complex are off limits to the public, most of the property is now part of the Northern State Recreation Area and can be accessed, if you’re up for a little ghost hunting.

Paranormal investigators say the 1889 Walker-Ames house in Port Gamble is the most haunted house in Washington and possibly even the country. In fact, the town itself is haunted, according to residents and ghost hunters.

Paranormal investigators report the Walker-Ames house in Port Gamble, Washington, is haunted with mysterious visits by ghostly children and house staff from a former era.

The ornate Victorian home, with its upper stories painted a mossy green, pale yellow on the lower floors, and red around the bottom of the house, has been empty since the mill closed more than 20 years ago.

The Port Gamble Paranormal website claims many homes in the town, which was built in 1852 as a company lumber mill town and modeled after New England towns of the same era, are haunted.

It’s not hard to believe that Port Gamble and the Walker-Ames house, which are located on the Kitsap Peninsula and exude a ghostly aura are haunted.

Local psychic and paranormal investigator Pete Orbea offers tours of the Walker-Ames house and other areas in Port Gamble. According to Orbea, supernatural activity occurs throughout the house, and visitors have reported oddities ranging from hearing weird voices to seeing apparitions. Visitors have also reported seeing children peeking out of the attic windows, an angry little boy in the basement, and other house staff, including a butler and a housekeeper.

Some who have taken Orbea’s tour claim something pulled their hair or grabbed at them in the basement, and Orbea has described a bad stench at times following tours out of the house. Warning: Take the tour at your own risk.

Kells Irish Pub in Pike Place Market in Seattle was once a mortuary and is reportedly haunted by ghostly apparitions and other spirits of the dead.

Kells Irish Pub is in the Pike Place Market and is a known ghostly haunt. Some swear it’s the most haunted bar in the country, although most states probably have a drinking establishment patrons would swear is as haunted as Kells. They might be hard-pressed, though, because of the number of bodies that have passed through the pub.

Kells is located in the Butterworth Building, a former mortuary. The entire building was used to store bodies, according to the website Ghostly Activities, and Kells was the entrance for delivering the bodies, which were then taken up to the third floor on the elevator for processing.

An interior shot of Kells Irish Pub, where mirrors have been known to shatter out of nowhere and glasses have been knocked off tables by unseen beings.

Some of the paranormal activity documented inside Kells includes apparitions, including a man in a suit who has been seen sitting at the end of the bar, a little girl with red hair that manifests more often during the day when children are allowed in the bar, and a spirit in a derby hat that appears in a mirror.

In Seattle for a fun weekend! Hanging out in some of Seattle’s famous haunted sites. Right now, it’s dinner time at Kells Irish Pub!

Customers and staff have also reported mirrors shattering for seemingly no reason, glasses that are suddenly knocked off tables, and disembodied voices. But Kells is a hot spot in Seattle known for its live music and drinks, and some say spirits are attracted to the lively atmosphere.