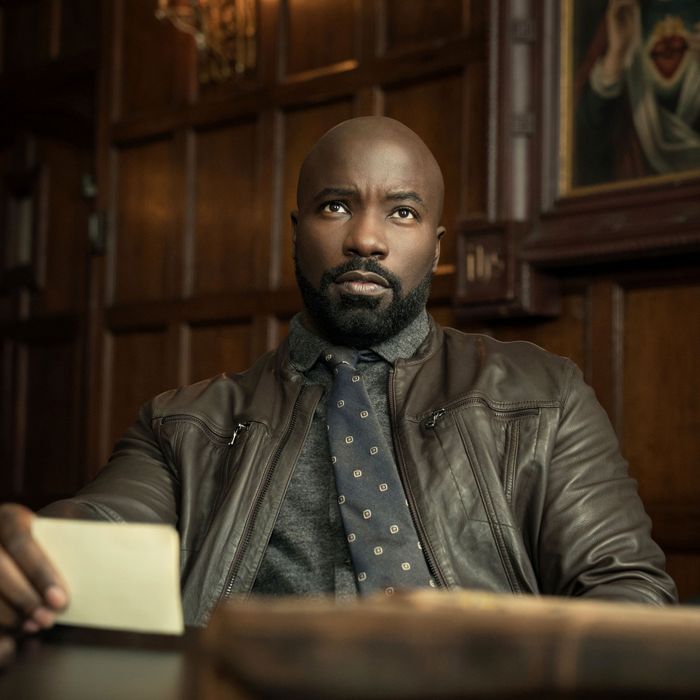 Demons are cool and all, but isn’t it always fun when Evil dives deep into ghost stories? That’s what happens this week as the team’s new case leads them to one of the most haunted apartment buildings in New York City.

A teen named Wyatt has been missing for months, and here’s what his parents know: He’s not the type of kid to run away (as the police suspect), they received one broken-up phone call from someone who sounded like him in which all they could make out was “save me,” and he spray-painted a giant pentagram on the floor under his rug although he was never into occult stuff. Curious, right?

The biggest clue, however, ends up being something carved into Wyatt’s desk: the words “el game” followed by a bunch of numbers. Thankfully, Kristen’s researching what this could mean just as her daughters walk in from school and they know exactly what the el game is. It’s the elevator game — an urban legend that says if you follow a specific set of instructions and travel to different floors in a certain order (those numbers in Wyatt’s carving), you’ll end up in the nether region, or, hell. If you play the game and either don’t complete it or don’t follow the instructions correctly, you’ll be haunted for the rest of your life. It sounds like a super fun and wholesome time.

Kristen and Ben head to the apartment building where Wyatt was last seen (he goes into the elevator but never comes out — spooky!) and they are joined by Assessors-in-Training Lynn, Lila, and Laura on what is truly the freakiest Take Your Daughter To Work Day in history. They all play the elevator game, but there’s some confusion since this building skips the 13th floor, one of the floors you need to press per the instructions. The game doesn’t work. But all is not lost! They run into a teen who turns out to be Wyatt’s girlfriend Felicia’s best friend. Wyatt’s girlfriend is missing too, and this friend links it all to the elevator game. Wyatt played it and went missing, so Felicia tried it and this girl has a recording of Felicia playing the game that ends with her screaming and then disappearing forever. Cool, cool, cool, I’m sure Kristen is loving her choice to let her daughters tag along.

Ben needs more information and has an idea of where to get it: He calls up Vanessa. You may remember Vanessa from such things as starring in the paranormal reality show Gotham Ghosts and also hooking up with Ben after informing him that the ghost of her dead sister is grafted onto her arm. She leads Ben to a Gotham Ghosts tour where they learn all about a girl in the 1960s who got stuck in the elevator of that building, had half her body chopped off, and now her half-body ghost crawls the halls haunting people with the clickety-clack of her fingers and general hideous ghost face for all eternity.

Now, obviously Evil isn’t going to set up the promise of such a ghost and not give us a payoff — Evil respects its viewers, and by “respects” I mean “loves scaring the shit out of them” — and it ends up being Kristen who has a run-in with this ghost girl. Um, it’s horrifying? Kristen gets stuck in the elevator between the 12th and 14th floors and the ghost girl slowly crawls toward her and then grabs her until finally Kristen gets the elevator to start working again. In a very Kristen Bouchard move, she runs out of that building and immediately calls her therapist to tell him that those anti-hallucination meds he prescribed are less than effective.

And yet still, this is not the scary centerpiece of the episode. That belongs to Ben. He, too, decides to try the elevator game alone because none of these people seem to learn their lessons. He figures out the buttons Wyatt must have pushed in lieu of a 13th floor and ends up traveling to the nether region, or, a secret giant basement in the building. There, he finds the decaying bodies of Wyatt and Felicia and realizes that they couldn’t call the elevator back, were trapped, and died waiting to be rescued.

Ben proceeds to freak the fuck out. He can’t get the elevator back and the phone reception is so bad that although his calls get through to Kristen and David, he can’t speak to them. He’s going to die down there, slowly and all alone. Are you thinking wow this could not get any  worse for Ben? Well, this is Evil,  things can always get worse. And they do! Because it turns out Ben isn’t alone after all — his night terror demon lady will hang out  with him to the bitter end, and she’s a real dick.

Can we talk about the “will” Ben writes on his phone? Listen, I love Ben with all my heart and I’m thoroughly enjoying his increased screen time this season, but if my dead friend’s last note to me was “I’ve enjoyed working with you” oh wow would I be pissed. Come on, Ben! It’s Kristen! At least thank her for introducing you to canned margaritas or something. You know you love them now!

After finishing his notes to his sister, David, and Kristen, Ben simply lies back, and then he starts praying in Arabic — it’ll be interesting to see how this near-death experience changes Ben in regards to his feelings about faith. Thankfully, he’ll have time to explore that, because Kristen and David realize Ben must’ve tried playing the elevator game again, figure out the buttons to push, and come to Ben’s rescue. Seeing the light fill up the room, Ben runs to them, screaming to keep the elevator doors open, and collapses in tears on the elevator floor. Kristen hugs him and assures him he’s safe now. But Ben sees his night-terror demon get on the elevator with them, so we know Ben still has some problems to work out.

Since Evil loves to expose real-world horrors as much as supernatural ones, the other big storyline in this episode opens up a discussion about racism within the Catholic Church. The subject is broached by, you guessed it, Leland. He finally gets his first exorcism session and is clearly having a ball messing with David — Michael Emerson pretending his new rosaries are hurting him is, as the kids and chefs say, [chef’s kiss] — and as they wait for session number two in a month, David is assigned to be Leland’s spiritual counselor, his exorcism sponsor, if you will. As much of a mockery as Leland is making of the whole thing, David still doesn’t let it get to him. And remember, the big Julia reveal didn’t work, either. So, Leland moves on to his next move in his quest to rile up David and lure him away from the priesthood: Reminding him about the explicit racism throughout his chosen religious institution and calling him nothing more than a “diversity hire,” among other things.

David doesn’t take the bait in front of Leland — he knows this game too well — but then several events take place revealing that hello, of course David’s felt conflicted about that. First, in Priest School he reveals that for his first real, live homily he’s going to speak directly about racial issues, but by the time David hits the word “slavery” in his opening sentence, Teacher Priest is like whoa, whoa, whoa isn’t this a little too controversial, we like to pretend real problems don’t exist because they might upset people, Davey boy. Okay, he doesn’t say the second half of that but we know.

There is one other Black priest-in-training in David’s class, Kevin, who feels David’s pain and invites him to a party of, as Kevin puts it, other “renegade Catholics.” This party does not go so well. David is clearly upset by what Leland brought up, plus he’s drinking, so when David defends his faith to a naysayer and that dude says that instead of Uncle Tom they have “Father Tom,” David punches him right in the face. On his way out, a Black minister at a Gospel church stops him and invites him to come check them out because, “what the Catholic Church doesn’t do, we do.” It seems David might at least have a looksy at what the guy is talking about.

Although! David does get to do his homily as written. Sure, that day there are only like 20 people at mass and two of them are Kristen and Leland — Leland is in the congregation eating a tub of popcorn because although Leland is a lover of Satan, he is also unquestionably a hoot — but still, David seems proud. And so the battle for David’s soul rages on.

• I still have no idea what’s really up with Sheryl. She convinces Kristen to keep a bed in her office for Sheryl to use when she’s babysitting late at night and tells her that getting closer to her granddaughters is something her “therapist suggested.” Does she want Kristen to know she went to see Boggs? The woman is freaking me out, is all I’m saying.

• You might think that 1960s ghost girl was the creepiest thing in this episode, but don’t sleep on that doorman/security guard guy who wanted to babysit Kristen’s daughters. Do not sleep on him!

• Lexis Watch: She has to stay behind on the Elevator Game field trip to study with her math tutor. Does this mean anything? Will math push Lexis further toward the dark side? It certainly tracks.

• When David’s teacher tries to knock him down a peg by disdainfully noting that David has “a high regard for [himself] and [his] worth to the church” and David proudly responds, “I do.” Wow, wow, wow my friends I felt that down into my toes.

• Watching Kristen and Ben stumble as they have to explain what they do to Wyatt’s parents without David there to take the lead was such a great little character moment for those two.

• There was something very flirty in the way Kristen called David “Father David,” right? Am I projecting? I could be projecting.

• We are just bathing in David-wears-turtlenecks content at this point. We are not worthy.