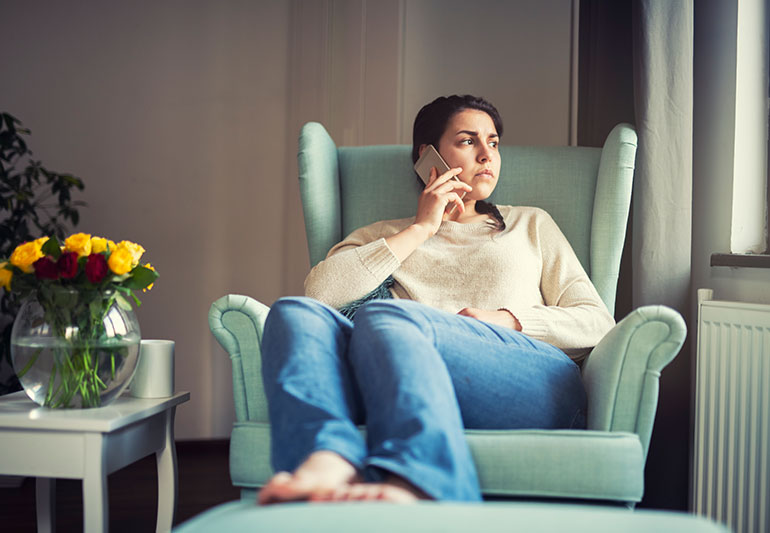 With the coronavirus pandemic receding and many people vaccinated, all the single ladies (and others!) may be ready to fire up those dating apps or head out to their favorite club for some actual in-person connection.

Cleveland Clinic is a non-profit academic medical center. Advertising on our site helps support our mission. We do not endorse non-Cleveland Clinic products or services. Policy

But there’s an eerie trend that’s on the rise, and it doesn’t just affect your love life. Ghosting, as the spooky moniker suggests, is the act of abruptly disconnecting from all forms of tech contact and disappearing from a potential partner’s life without any explanation. And it’s the new norm in romance — and beyond. According to a 2018 study, 25% of participants said they’d experienced being ghosted by a romantic partner or friend. And ghosting involves almost every facet of life: from friends and relatives to the workplace.

If you’ve ever been ghosted, you know the confusion and hurt that manifests after such an event. But whether you’re the ghosted or ghostee, what makes people exorcise themselves from others in such abrupt and mysterious ways? Psychologist Susan Albers-Bowling, PsyD, helps unpack the reasons why people ghost, and how to keep from being haunted by phantoms of your past.

Dr. Albers says there are many reasons people ghost, and they reveal far more about the person doing the ghosting than the person being ghosted. She says when someone vanishes from your life, it can reveal a lot about how they handle conflict, approach difficult situations and treat others in the long term.

“Ghosters often grow up in families where conflict and arguments were taboo,” she says. “Perhaps they had no role models to show them how to communicate about emotional issues.” She continues:

She says it’s often those who handle things in passive aggressive ways who are the biggest ghosters. And it doesn’t just involve intimate relationships: There’s an uptick in ghosting within the job market.

“It’s often people running away from responsibilities that make them uncomfortable or skipping out on putting in their two weeks notice and instead just not showing up to work when they’re ready to quit.”

What your attachment style says about you

We’re venturing into psychology 101 here, but it’s difficult to discuss ghosting without a basic breakdown about attachment styles. As you grow up, there are four primary attachment styles that emerge depending on the way you interact with your parents. They are:

In adulthood, many psychologists believe that these attachment styles — called attachment theory — affect how your interpersonal relationships evolve. Dr. Albers says two attachment styles most likely to engage in ghosting are the anxiously attached and avoidant attached. She explains.

“Essentially these anxiously-attached individuals want to be close to others, but their insecurity about the relationship often leads them to have difficulty staying in the relationship. In contrast, avoidant individuals back away from intimacy and sometimes feel that it is safer/easier to be alone,” she says.

What’s tech got to do with it?

Turns out, tech has almost everything to do with ghosting. Though it seems to be a recent development over the last decade or so, as we’ve turned to our smartphones for more and more direction in life, Dr. Albers says technology has greatly contributed to ghosting.

“When you don’t have personal contact with someone on a day-to-day basis and have only connected through text or a dating app, it’s easy to avoid any in-person awkwardness,” she says. Indeed, there is an art to beginning and ending any relationship — whether it be working or with friends —  and Dr. Albers says unfortunately this art is becoming a lost one.

“Technology makes it a lot easier to do ghosting than it ever did before. In the past, if there was someone you were dating, it was probably someone you met through your social circle and you would see them again. But with technology it makes it easier to be much more distant.”

She says the recent coronavirus pandemic — with its isolation and quarantine — may have contributed even more to our lack of tolerance for hard conversations.

“In some ways, we’ve lost the art of a lot of social interactions. Coronavirus probably didn’t cause this, but may have intensified this. Because of coronavirus, people weren’t meeting up with others, looking them in the eyes, or talking to them directly. So it became easier to hide behind the smoke screen of text messaging,” she says.

It’s not you. It’s them: Advice for the ghosted

If you’ve experienced ghosting firsthand, it can be hard to understand how someone could be so heartless. You may want to turn inward looking for things about yourself to blame. But Dr. Albers says ghosting says more about the person doing it than it does about you.

“Take ghosting as a blessing in disguise,” she says. “It simply means you’re not a good match, nothing more.” She says while it may be tempting to conjure up explanations for why someone left (or even to point the finger at yourself), resist the urge to ruminate and find closure within yourself.

“Although it is hard, get comfortable with simply not knowing. Remind yourself, that for whatever reason, this person was not ready to be in a relationship and that’s OK.”

She says to be sure not to blame yourself and consider what the other person’s actions tell you about how they approach feelings. “It’s unlikely that you would want to be with someone who isn’t able to honestly communicate with you directly,” she says.

And if you’re the ghostee?

Are you guilty of ghosting? It may make sense to rationalize the act of ghosting. Maybe the thought of hurting that person you’ve been casually hanging with on Thursday nights is just too much to bear. Because you know they’re into you way more than you’re into them, and it’s best to just make like a phantom and ghost them.

Dr. Albers says “Unfortunately, the term ‘ghosting’ has made it a more commonplace practice. This term covertly suggests that this is a normal way to end a relationship that you’re no longer interested in.” She says to remember there are far healthier strategies.

“If you are a frequent ghoster, pause for a moment before you disappear. Put yourself in the other person’s shoes. Ask yourself what you are avoiding by doing a disappearing act? What is the risk by simply saying goodbye? What are you afraid of?” Dr. Albers says.

And if you’re tempted to ghost on that job you hate, best to think again.

“Although ghosting is something that happens in dating, with jobs, it could really be damaging to your future career.”

Don’t look back: How to keep the ghosts of your past from haunting your future

So, you’ve been ghosted. You had high hopes for that new person in your life, but now a week has gone by without so much as a text or email. How do you pick yourself up and get back out there?

“My guess is, if you’ve been ghosted, you can pinpoint a few things in the relationship that were really off.” She says taking an inventory of red flags that might have cropped up early in the relationship can help you avoid those pitfalls in the future, and future heartbreak.

“As difficult and painful as it is, it’s a blessing in disguise. Trust that it was not meant to be. Don’t look back.”