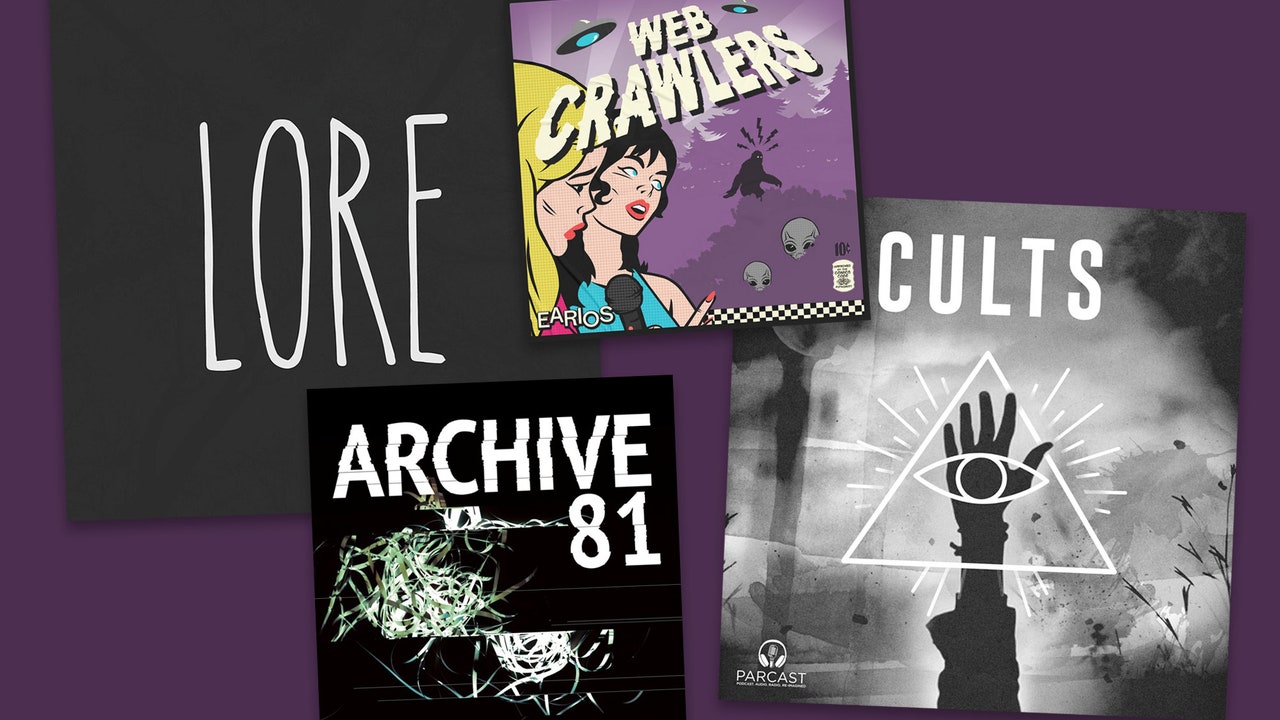 “Spooky Season” (also known colloquially as “October”) is, for many, a long-awaited time of the year, and in classic 2020 fashion, this season is packing quite the punch. On October 31, a blue moon will rise (the first time a full moon has fallen on Halloween in 76 years), and the veil between the spirit world and our own will allegedly thin. And for the astrologically inclined, Mars and Mercury are also in retrograde, just for fun! While those facts alone might be enough to set the superstitious on edge, there’s also no denying the creeping feeling that our current reality is more disturbing than any tale we’ve ever been told around a campfire.

So a creepy podcast could serve as a way to augment Spooky Season, or a way to fully escape from current events. Whatever the reason, these podcasts—filled with rich narrative storytelling, elaborate audio soundscapes, fascinating phenomena, and good old-fashioned scares—are sure to satisfy listeners seeking out the weird, unexplainable, frightening, or downright horrific.

Hosted by Aaron Mahnke, Lore is firmly in the pantheon of spooky podcasts. After launching in 2015, the show quickly climbed the charts and landed on several “best podcasts of the year” lists, and was even adapted into an Amazon original TV show in 2017. Lore’s staying power comes from the combination Mahnke’s meticulous research and addictively creepy performance—he expertly weaves poetic and philosophical elements into ancient folklore and ghost stories, offering listeners an impressively layered audio experience. And although Lore’s more chilling tales may seem unbelievable to some, it’s worth noting that Lore is widely recognized as a top history podcast. “All of the material is from documented stories or historical events,” Mahnke has said. “Some are ancient and some are modern, but they are all factual in the sense that people reported these things and believed they were true.”

Hosted by Derek Hayes, Monsters Among Us is a podcast where real people call in to share stories of close encounters with ghosts, UFOs, cryptids, and other unexplainable phenomena. From Bigfoot sightings to skinwalkers to time slips to Mirrored Men, listeners will be enthralled by the sheer variety of unexplainable experiences that are discussed. And the candid storytelling style of the voicemails—in which callers will pause, second-guess themselves, make jokes, or even apologize in the middle of truly bizarre or haunting stories—is compelling, and imbues each tale with a strange sense of authenticity that will likely thrill true believers, and may even give skeptics pause. As host, Hayes works to validate his callers’ experiences, while also attempting to gently debunk anything that might have a non-spooky explanation.

In this horrific true-crime investigation, health and science journalist Laura Beil unravels the enraging, engrossing story of Dr. Christopher Duntsch, a doctor who performed botched surgeries on multiple patients over the course of several years. In addition to exposing the potential motives (or lack thereof) behind Dr. Duntsch’s gruesome and often fatal surgeries, Bell explores the way Duntsch was allowed to fail upward for decades. After listening, it’s hard to say which is more disturbing—Duntsch’s stomach-churning acts of malpractice, or the way American health care system aided and abetted him, and continually failed to protect his victims.

Who amongst us hasn’t discovered an odd or creepy topic online, immediately texted a friend about it, and together, entered a manic Wikipedia spiral to get to the bottom of it? As hosts and self-described “Internet Sleuths,” Melissa Stetten and Ali Segel transmute this bonding experience to audio form, brightly chatting as they fall down rabbit holes that include the story Dyatlov Pass incident, in which nine Russian hikers mysteriously died in the Ural Mountains, sleep paralysis demons, the lost colony of Roanoke, and the Bell Witch. But although the topics may range from the slightly odd to the deeply unsettling, Stetten and Segel maintain a loose, upbeat dynamic, which means listeners can comfortably dip their toes into the unexplained, but won’t walk away feeling, well, haunted.

Cocreated by Nia DaCosta (director of the much-anticipated Candyman remake) and Aron Eli Coleite, and starring and executive produced by Kiersey Clemons, Ghost Tape follows Tessa Dixon, who enlists in the Army following her grandfather’s death. When she finds a mysterious tape that once belonged to her grandfather, she accidentally unleashes the horrifying consequences of her family’s dark history. Ghost Tape’s first episode dropped on October 26, meaning listeners have the chance to follow Tessa’s story in “real time.”

Executive produced by Lore’s Aaron Mahnke with iHeartRadio and Blumhouse Television, 13 Days of Halloween stars Keegan-Michael Key as the spooky Caretaker of a purgatorial hotel called the Hawthorne Manor. Each episode explores a different story from each resident of the house, including dead lovers, creepy children, and tragic weddings. With a storytelling style that combines both “ethereal horror” with the classic, communal tradition of tales told around a campfire, 13 Days was produced with state-of-the-art binaural audio technology that provides an immersive, three-dimensional experience for listeners. New episodes will be released daily until October 31.

The found-footage horror genre gained popularity through films like The Blair Witch Project and Paranormal Activity, and Archive 81 effectively translates the conceit into a bone-chilling audio experience. The show follows two characters: Dan, an archivist who discovers a set of mysterious tapes, and Melody, the person within the tapes who is conducting a series of strange interviews in the mid-1990s. Now on its third season, Archive 81 is also being adapted into a Netflix series starring Mamoudou Athie and Dina Shihabi.

Inspired by the popularity of investigative podcasts like Serial and S-Town, Limetown is a horror docudrama that “reports” on a fictional event: the disappearance of over 300 men, women, and children from a small town in Tennessee. Upon its release, the show was heralded as a top-tier radio drama that masterfully fused two popular genres, while also creating something that felt utterly new. In what appears to be a growing trend for horror podcasts, Limetown was adapted into a TV drama starring Jessica Biel and Stanley Tucci in 2019.

Parcast might very well be the Ryan Murphy of podcast networks, due to both its taste for the macabre, and the astounding rate at which it churns out new content and shows. Parcast has made its name telling tales from the fringes, and its ever-expanding offerings include shows about the paranormal, conspiracy theories, unsolved murders, solved murders, con artists, mythology, espionage, assassinations, and more. Considering it’s essentially a one-stop shop for eerie and unsettling topics, we’re highlighting the entire network this Halloween season, and singling out some of its spookiest shows:

Hosts Greg Polcyn and Vanessa Richardson dive into the inner workings of the world’s most notorious cults and their leaders, examining them from both a historical and psychological perspective (although they are quick to note at the top of every episode that they are not trained psychologists). From the Manson Family to Aum Shinrikyo to the Ant Hill Kids to NXIVM, Cults serves as a potent and disturbing reminder that fact can often be more horrifying than fiction.

Host Ashley Flowers digs into some of the world’s most bizarre true-crime occurrences—cases in which facts and conventional logic don’t seem to add up to a satisfying explanation. Categorizing each episode into categories like “Mystical,” “Alien,” “The Unknown,” “Haunted,” “Disappeared,” and “Conspiracy,” Flowers dissects cases including the disappearance of Malaysia Airlines Flight 370, a demonic possession that inspired the movie The Exorcist, and the intense and tragic bond of “The Silent Twins.”

Also hosted by Greg Polcyn, the premise of Haunted Places is self-explanatory, providing eerie tours and spooky backstories of the sites all over the world plagued by the paranormal. The show kicks off with the terrifying tale of the Cecil Hotel in Los Angeles (said to be an inspiration for American Horror Story: Hotel), and from there, takes listeners across the globe to the catacombs of Paris, the Devil’s Kitchen in Georgia, Aokigahara (or “the Sea of Trees”) in Japan, and the Island of the Dolls in Mexico.

Host Alastair Murden investigates the backstories of superstitions from around the world (black cats, the number 13), and asks the question: Are these codes of conduct truly just coping mechanisms created in the face of an unpredictable world? Or can we actually sway the supernatural and spiritual to work in our favor?

Hosted by Bill Thomas and Tim Johnson, Extraterrestrial unpacks different alleged UFO experiences and encounters, and attempts to land on the most plausible explanation, from sightings to abductions to crashes to ancient alien theories—and even an extraterrestrial romance.