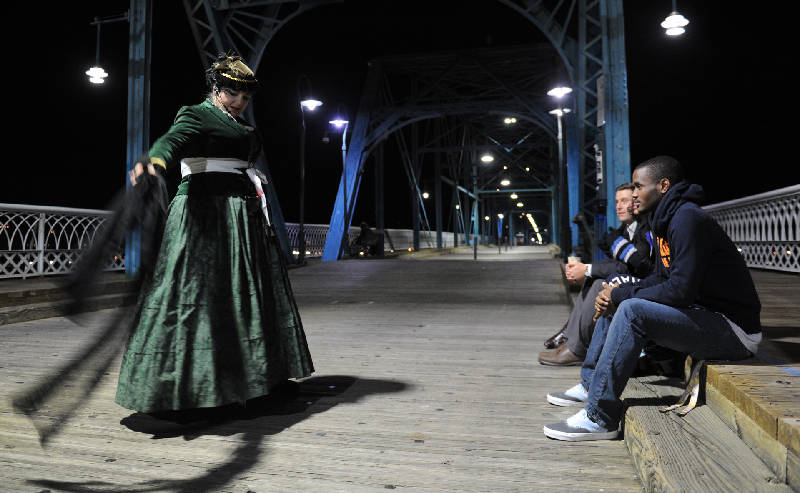 The secondary roads will reopen early on Thursday.

There’s been so much interest in “Old Green Eyes,” a ghost that’s said to be the floating head of a soldier searching for his missing body, that the park is closing all of its secondary roads tonight to prevent would-be ghost hunters from wandering all over.

“We get a lot of people who come out after hours … looking for ghost-type stuff. It brings people out,” Chief Ranger Todd Roeder said.

The Internet is awash with accounts of Old Green Eyes, some of which say the ghost isn’t a soldier but a spirit known to the Cherokee Indians.

The ghost even has his own Facebook page, “Green Eyes — The Ghost of Chickamauga Battlefield,” that bills itself as the “official site of the most talked-about ghost in the South.” The page had 12,595 “likes” as of Tuesday afternoon.

The battlefield has closed its secondary roads on Halloween for the past four years to cut down on seekers of Green Eyes and other ghostly inhabitants, Roeder said.

Chickamauga isn’t the only local site dealing with one-night ghost adventurers and not everybody with a supposedly haunted property is happy about the attention it brings.

“Some places don’t want to be known as haunted,” said Amy Petulla, owner of Chattanooga Ghost Tours, whose guides lead downtown sidewalk tours every night from March 1 through Nov. 30.

One stop is outside the Sheraton Read House Hotel on Market Street, where Room 311 is supposed to be haunted by the ghost of a young female prostitute who was murdered by a Yankee soldier. The ghost story is mentioned in the coffee table book “Weird Tennessee” and on ghost-related websites.

But the Read Hotel doesn’t milk the alleged haunting for marketing purposes. In fact, some hotel employees wish the ghost story would go away.

“There is no truth to the matter,” said Lafawnda Sanchez, a hotel front office employee.

She pointed out that the current hotel was built in 1926 — long after the Civil War. The woman was supposedly murdered at the Crutchfield House Hotel, which preceded the Read House and sits in the same spot.

“All in good fun”

Other ghost tour stops are more amenable to the attention.

“It’s all in good fun,” said Katrina Craven, spokeswoman for the Hunter Museum of American Art, where the mansion section of the museum is said to be haunted by five ghosts, including Augusta Hoffman, who went missing in 1912. Her bones were found stuffed beneath the floorboards of a house next door to the mansion, prompting a murder trial that received nationwide attention.

“None of us have actually seen a ghost. That’s really all I can tell visitors,” Craven said.

The Delta Queen Hotel embraces the idea that it’s watched over by the benign ghost of its former owner, Capt. Mary B. Green.

“She’s a sweet spirit,” said front desk manager John Price. “Her room is one of the most requested rooms.”

Her ghost story involves booze and a barge.

“She didn’t allow alcohol on board when she was in charge,” Price said, but after Green died on April 22, 1949, a bar opened inside the steamboat. Her ghost apparently wasn’t pleased.

“There was a barge that hit the Delta Queen right where that bar was located,” Price said.

The spooky kicker? The barge, Price said, was named the “Mary B.”

Officials at Point Park and Cravens House on Lookout Mountain, both scenes of Civil War fighting, say they don’t have any issues with ghost hunters on Halloween.

At Chickamauga Battlefield, though, Old Green Eyes already had an impact. Park rangers had to usher a group of ghost watchers away from the Wilder Monument this weekend after dark, Roeder said. The park keeps people out at night partly because of vandalism, but mainly because of concerns about people stealing artifacts, which has happened in the past, he said.

“It can become addictive,” said McKeel, who describes himself as more of a “debunker.” He didn’t charge for his services.

McKeel once determined that an Old Green Eyes “sighting” was actually a distant green stoplight that was visible while the red light wasn’t.

Roeder is philosophical about the alleged hauntings that draw ghost hunters to the battlefield.

“Do I wish it would go away? No. It’s not a hassle. It’s a local thing,” he said. “It’s a story that’s passed down from generation to generation.”

“That’s a constant question here at the park,” he said. “We just tell them the truth: We haven’t seen him.”