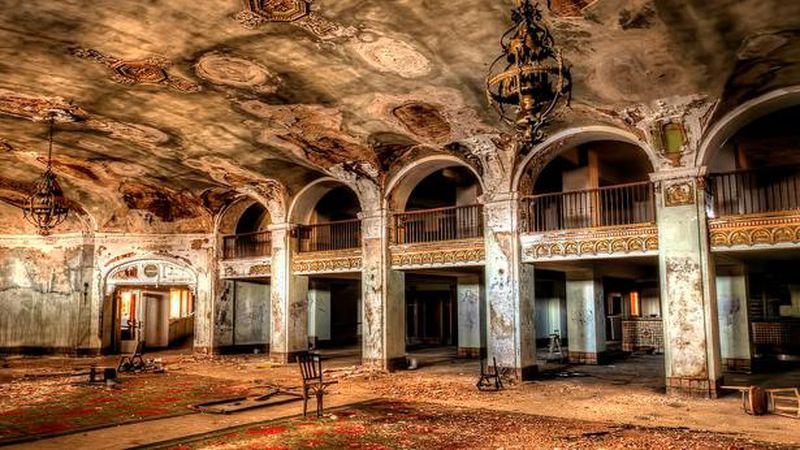 Just like the Lone Star State’s slogan “Everything is bigger in Texas,” so, too, are the terrifying hauntings and ghost stories that abound throughout the state.

As hard as it was to boil down, here are the top five haunted places in Texas:

Now vacant, the Baker Hotel opened its doors in 1929 hoping to capitalize on the community’s well-known mineral waters, and was the first hotel in Texas with a swimming pool. The 14-story, 450-room hotel dominated the city’s skyline and boasted plenty of creature comforts, including a gym, bowling alley and beauty parlor.

By the early 1930s, it was a known spa and convention destination, but before the end of the decade, it had started its long slide into financial ruin. It was abandoned by the 1970s. The hotel was placed on the National Register of Historic Places in 1982, and by 2014, there were efforts underway to renovate the once-opulent Baker Hotel, according to news reports.

The interior of the now abandoned, but formerly grand Baker Hotel. Based on local lore, the old hotel has its fair share of ghosts.

However, although the decayed structure with little evidence left of its grand heyday may appear empty, reports indicate that may be far from the truth. It would seem, based on local lore, that the old hotel has its fair share of ghosts.

One chilling tale involves the spirit of a bellboy who once worked at the luxurious spa and was killed when he was sliced in half by an elevator, according to BuzzFeed. It seems he still haunts the place.

The most famous ghost stories at the Baker Hotel are about the mistress of the hotel’s founder. It seems she jumped to her death from the 14th floor. Visitors have reported smelling a lavender perfume, which she was known to favor.

Reportedly, the spirits of sick people who came to the hotel to partake in the curing mineral waters, but died there instead, haunt the hotel grounds.

The apparition of a little boy in a wheelchair has also been reported by visitors, and the Baker suite, where the hotel’s owner died, is known paranormal activity.

Since there are plans to reopen the Baker Hotel, patrons may be able to experience the hotel’s hauntings on a first-hand basis one day soon.

Located about 75 miles outside of San Antonio, the Yorktown Memorial Hospital is now abandoned– by the living, that is. The chilling stories of other worldly incidents at the now-defunct hospital seem to point to the fact that the premises are definitely inhabited — by something.

Built in the 1940s and opened in 1951, Yorktown Memorial remained a fully functional hospital through most of the 1980s, but even after it closed, some visitors claim many patients never really left.

The abandoned Yorktown Memorial Hospital holds up to its reputation, if looks are any indication of the rumors that the old hulk of a hospital is haunted.

The building is reportedly haunted by an array of entities making appearances over the decades.

Some witnesses have reported seeing shadowy figures in the hallways. Others have claimed they were slapped, scratched or punched by an unseen force on the loose in the decrepit former hospital.

The paranormal activity at Yorktown started before the hospital closed. One of the more frightening tales involves a heroin addict who was left on the hospital steps, but wasn’t discovered until the following morning, when he was already dead. His name is T.J., but he’s not a malicious spirit, according to ghost hunters. In fact, he particularly likes the ladies and has even been known offer up a pinch or two to unsuspecting visitors.

The scarier stories involve the ghosts of the nuns who ran the hospital, according to hauntedrooms.com. Reports indicate that malevolent spirits have attacked people inside the hospital’s chapel. Other visitors have reported seeing a large man with glowing red eyes, and the shadowy shape of a large dog.

Visit Yorktown Memorial at your own risk.

An infamous 25-acre stretch along Interstate 45 near League City between Houston and Galveston, and bordering the Calder Oil Field, is known as the Texas Killing Fields, or the “highway to hell.’

Since the 1970s, the bodies of at least 30 murdered girls and young women have been found in this barren marshland dotted with abandoned oil fields and overgrown brush, and more young women from this area are missing.

The Killing Fields are not necessarily haunted by documented apparitions or ghosts, but rather by the evil that can be found in the human heart, according to paranormal investigators. Experts do not debate the fact that the Killing Fields are evil; instead, it’s the kind of evil malice that permeates this uninhabited wasteland that frightens so many, they say.

Most of the killings remain unsolved and authorities investigating the cases believe it’s a dumping ground for serial killers.

This is a scene from the 2011 movie ‘Texas Killing Fields’ that shows a stretch of I-45 where the bodies of so many young female homicide victims have been discovered since the 1970s.

There was a 2011 movie made about the Killing Fields, and many more stories and news reports about it have been published.

The unforgiving landscape and malicious history of the area are chilling enough to frighten even the bravest of travelers driving through the Texas Killing Fields.

The Hotel Galvez on Galveston Island is one of the oldest hotels on the island and has quite a haunted history that the resort even mentions on its website.

The Hotel Galvez is one of the oldest hotels on Galveston Island, having opened its doors in 1911 following the devastating hurricane of 1900 that killed as many as 8,000 people in the city.

Known as the “Playground of the Southwest-” for the wide array of famous people who have graced its ornate hallways, including Frank Sinatra, Jimmy Stewart, Franklin D. Roosevelt, Dwight Eisenhower and many more, the hotel has a rich and haunting history.

The hotel even details one of the ghost stories on its website. It seems a woman who committed suicide in room 501 never left, according to some. She was a seaman’s wife, and when she learned her husband’s ship had sank, she hanged herself. She’s known as the “Lovelorn Lady” in some circles and has been seen wandering the halls on the fifth floor, in addition to making appearances in room 501. The smell of gardenias is said to signal her presence, according to the website hauntedrooms.com.

The USS Lexington is docked at Corpus Christi, Texas, and is now a museum after a long and distinguished career on the high seas, but the aircraft carrier is also haunted. The stories of ghostly encounters on the ship abound.

The USS Lexington is a World War II-era decommissioned aircraft carrier and museum docked in Corpus Christi. The ship was commissioned in 1943 and set more records than any other Essex Class carrier in the history of naval aviation, according to USSLexington.com, serving in 21 of 24 battles in WWII.

Nicknamed “The Blue Ghost” because of the four times during World War II that the Japanese had bragged about sinking her, the ship is home to many ghostly appearances and reported supernatural incidents. Many believe “Lady Lex” is the most haunted ship in the U.S., and here’s why.

The apparitions that have been spotted on the ship include a Japanese pilot who crashed into the carrier and was killed along with 50 U.S. seamen. The seamen burned to death in the engine room and in the back of the bridge, according to reports on the attack.

More than 370 men and women died aboard the USS Lexington, not just in wartime attacks, but from illness and accidents, too. Paranormal investigators say the spirits of some of these souls still haunt the massive ship.

Some visitors have reported hearing the sounds of battle, including weapons firing and men screaming.

The apparitions that have been spotted on the ship include a Japanese pilot who crashed into the carrier and was killed along with 50 U.S. seamen during World War II.

In the ship’s switch room, some people have described a feeling of discomfort, and others have reported becoming sick.

A handsome, blue-eyed seaman named “Charlie,” who died in WWII, is known to make appearances on the Lexington. Once, dressed in full Navy uniform, he even gave a family a tour, and when he disappeared, the family asked what happened to him. Ship officials told them there were no tours given aboard the ship, nor any Navy tour guides.

There are many chilling stories of the hauntings aboard “The Blue Ghost,” and the ship even hosts and annual haunted house, perhaps in deference to the many decades of reported paranormal activity on the carrier.