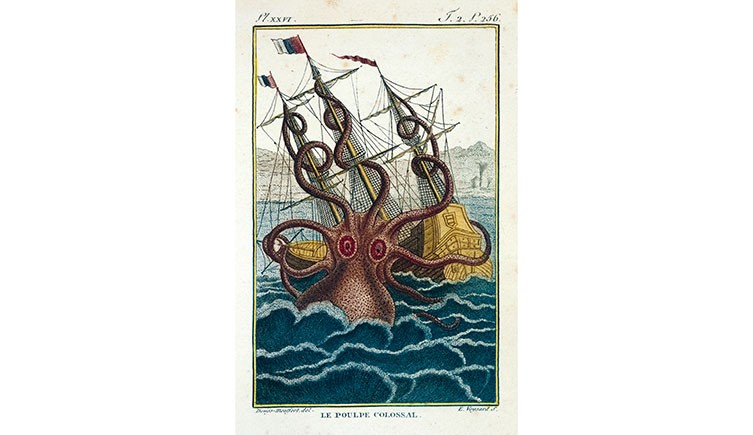 Sea monsters have a prominent role in myths and legends of most seafaring cultures on Earth and with such inspiring ocean biodiversity, it’s not difficult to see why.

Originating in Scandinavian folklore, the kraken is usually depicted as an aggressive cephalopod-like creature capable of destroying entire ships and dragging sailors to their doom.

‘Many cultures around the world have a myth or legend about a tentacled beast bothering seamen or generally getting up to no good,’ Jon says.

In ancient Greece, Aristotle and Pliny wrote about teuthos (squid). There’s the Scylla in the Odyssey and similar myths from the Caribbean (Lusca), Japan (Akkorokamui) and New Zealand (Te Wheke-a-Muturangi).

Jon says, ‘Squid and octopus really are unusual animals. Their body plan isn’t similar to anything else that we know of in the sea. They move quickly and the way that their bodies, arms and tentacles move seem to stimulate something in our fear of the unknown.

‘I think the fact that they are such odd creatures, with some very large species being very rarely seen, make it very likely that they could be the starting points for the kraken and other sea beast legends.

‘What we think happened is that the partially digested or rotted remains of giant squid and large octopus were washing up on beaches and people were starting to guess what they might be.

‘In Norway, the kraken myth grew and such washed-up specimens were interpreted as messages from God or the Devil, sometimes called sea angels, sea devils or sea monks.’

He adds, ‘These things happened separately and people around the world came up with similar answers and mythologies – a case of convergent evolution in myth form.’

Giant squid (Architeuthis dux) were first classified by Western science in 1857 and scientists are still busy unpacking their mysteries.

‘Naming and classifying a new animal is only the beginning,’ Jon says. ‘We knew it was real and not a mythical beast from people’s imaginations, but we’re still really just getting to know them.’

Found in temperate waters all over the world, giant squid live between 200-1,400 metres below the surface. Females are thought grow up to 13 metres and the slightly smaller males reach 10 metres.

Giant squid aren’t fussy eaters – they hunt fish and crustaceans and also scavenge. Scientists have found some evidence of cannibalism, but there’s no sign of ships on the menu.

Their greatest adaptation are their huge eyes. Giant squids have the second-largest eyes of any creature on Earth,  used to help detect and avoid sperm whales, which are the only predator large enough to eat giant squids when they are fully grown.

While some other species of smaller squid are aggressive pack hunters, the giant squid is thought to lead a solitary life in deep, temperate water, far from human contact.

According to Jon, ‘They probably can’t get big enough to take down a ship, but then it depends on the size of your vessel.’

‘Giant squid can’t get the oxygen they need at the surface. So when people do come across a live one at the surface, it’s because they are stressed and probably dying.’

‘We still don’t know how they mate, how long they live for, how they grow. They’re still highly mysterious beasts and it’s exciting that scientists are still answering these questions.’

A feature of seafaring folklore around the world, sirens and merfolk with humanoid torsos and serpentine tails have haunted the corners of maps and human imagination for millennia.

Oliver says, ‘Anybody travelling in a wooden ship over the horizon in the eighteenth century was more out of touch with the rest of humanity than today’s astronauts who at least have radio contact.’

‘These sailors would sometimes be travelling for years out of contact with people at home. There were big expectations about the fantastic things they might have seen on the other side of the world.’

Their stories were so popular that enterprising craftspeople in Japan established a thriving trade in cryptozoological specimens.

Although today we may recognise creative taxidermy or artfully dried sea animals for the hoaxes they were, mermaids were once prized features of private cabinets of curiosity and carnival sideshows.

What is a Jenny Haniver?

Jenny Hanivers – which date back to the 1500s – are fantastical sea creatures manufactured from the dried bodies of skates or rays from the family Rhinobatidae, commonly known as guitar fishes. These fishes live on the seabed, and while the front end of their bodies makes them look like rays or skates, the rest of the body is more like a shark.

Despite the musical name (which refers to their distinctive body shape), guitar fish don’t serenade sailors. The placid, bottom-dwelling animals eat invertebrates and can be found all over the world in shallow seas.

According to Oliver, the closest resemblance to siren-like behaviour is seen in their relatives, the rays. He says, ‘Some small species of ray have endeared themselves to humans with their habit of poking their snouts up out of the water, which can sometimes create a strange face-like apparition emerging from the water. They are often features of aquaria where some species will even let humans touch them.

‘If you look at the underside of the body, which is normally resting on the seabed, you will see the jaws they use to crush and eat crustaceans and the breathing apertures where water is expelled. When they are dried and folded, a kind of grotesque face is revealed.’

The animals also have a pointed snout or rostrum, which resembles an ecclesiastical hat, which is why they were sometimes also called sea bishops.

Sea serpents and sea dragons appear in stories from all over the world dating back to antiquity, and are usually depicted creating havoc for sailors.

‘Sea serpent myths go back into antiquity to a point in time we can’t even discern,’ Oliver says. ‘If we are looking for candidates from the natural world that generated these tales, then the oarfish is at the top of the list.’

What is an oarfish?

Oliver says, ‘The oarfish really is a fantastic looking animal – up to eight metres long, with a horse-like face, flame-red crest on its head and fin all the way down its bright, metallic silver body. What else do you want from a sea monster?’

The world’s longest bony fish, the giant oarfish (Regalecus glesne), has been documented growing up to eight meters in length.

It is found worldwide in temperate and tropical waters and is thought to live at depths between 200 and 1,000 metres. Like many of the largest creatures in the sea, oarfish eat plankton.

Their interactions with humans at the surface are usually during periods of stress.

‘Unfortunately, when they come to the surface, it means they are in trouble and stranding themselves,’ Oliver explains.

Oarfish usually swim in a vertical or horizontal position, using left and right undulations of their bodies and dorsal fins to balance and move forward. It is only at the surface, where they are struggling to breathe that they swim on their sides.

‘Swimming on their sides at the surface, these left to right undulations become vertical undulations that create an interesting spectacle and can even cause their bodies to coil up out of the water.’

Although deep-sea-dwelling, plankton-eating oarfish have no interest in sinking ships or consuming sailors, they are considered by some to be reliable predicators of deep-sea earthquakes and tsunamis, stranding themselves in numbers before seismic events.

While the theory remains unproven, Oliver believes there are some interesting hypothetical links. ‘It’s a long, flat, ribbon-shaped animal and if you have that kind of body shape, maybe it’s going to be particularly affected by pressure waves,’ he says. ‘There’s quite a lot of conjecture, but there may be something at the heart of it.

‘The sea, especially the deep sea, is the least explored habitat on Earth. Images coming back from there all the time are showing us just how little we really know and how many surprises are still waiting for us in the deep ocean.’