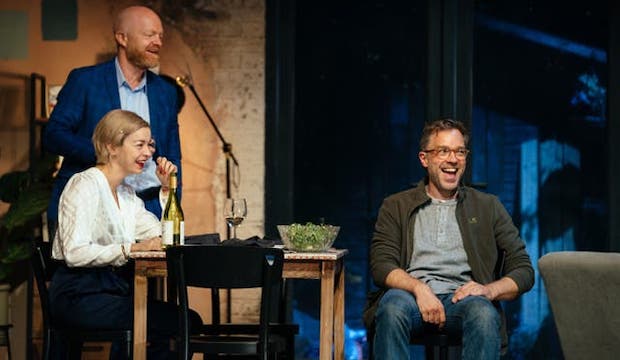 The Noël Coward Theatre is the perfect setting for this haunted theatrical tale. Over the decades, many thespians including Dame Judy Dench, have seen a phantom figure roaming the theatre’s backstage corridors. It is therefore fitting that 2:22 – A Ghost Story focuses on new mother Jenny (Lily Allen) and her baby as they are haunted by what seems to be a spectre at 2:22am each night in their newly renovated East London home. Having just returned from a business trip on a faraway island, husband Sam will have none of this supernatural nonsense. As an astronomy lecturer writing a book on ‘Astronomy for Idiots’, he would rather use his Wikipedia-like scientific knowledge to demystify these bizarre occurrences rather than listen to his increasingly distraught wife.

Enter Lauren, an overworked NHS psychologist with a penchant for drinking and popping pills when no-one is looking, and her new boo Ben, an East End born-and-bred builder who has found himself at the centre of a quintessential middle class dinner party. Ben is not afraid to call out Sam’s incessantly classist behaviour, and is convinced by Jenny’s belief in the paranormal as his mother would regularly perform séances, and has encountered ghosts himself.

Things get heated when Jenny, Lauren and Ben decide to prove Sam wrong. They want to show him that this spectre is real by staying up till 2:22am to experience the nightly haunting. In the meantime, Ben takes the reigns and performs a séance to try to conjure the ghost of Frank, a working-class man who lived for many years in the house. But are they conjuring the right ghost?

2:22 marks the West End debut for writer Danny Robins. Don’t be fooled though, Robins is somewhat of a ghost story specialist, this year writing The Battersea Poltergeist podcast starring Toby Jones and Dafne Keen. It became a global phenomenon reaching the no.1 spot for drama podcasts across the globe; the audio-drama is currently being adapted into a Hollywood TV series. Robins certainly knows how to spin a ghostly yarn and has sculpted a truly satisfying and unexpected final twist, making you rethink the whole play with new understanding as you exit the theatre. It must be said that Robins has wrought the male characters with more nuance and depth than the female characters, giving them 95% of the jokes and insights, while writing the women as almost two dimensional. 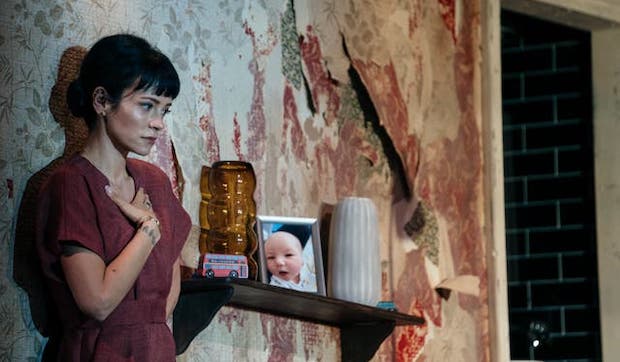 A 15-year mainstay as troubled Max Branning on EastEnders, actor Jake Wood steals the show with his exuberant performance of cockney Ben: laugh-out-loud funny and full of heart. Lily Allen as Jenny is surprisingly stilted at the start, but warms into her character as the plays develops. 2:22 is actor Julia Chan’s West End debut, who tries her darndest as Lauren, woefully hiding her feelings of love for married Sam. Hadley Fraser as Sam is the perfect vessel for embodying white male privilege, infuriated and devastated when he is finally proven wrong.

If you want to forget your troubles for an evening, envelope yourself in a compelling ghost story and join in on a few laugh-inducing jump scares, this is the show for you.