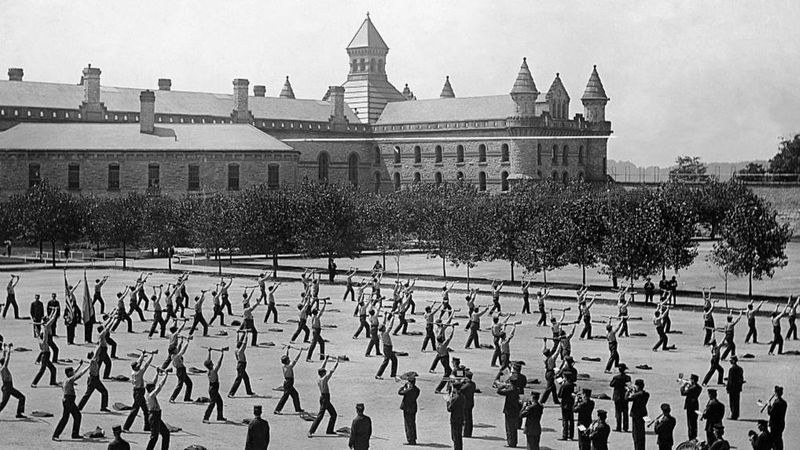 Ohio doesn’t have a lock on scary places. Every state has its share of tragedies, horrors and hauntings, but Ohio does have some of the creepiest places on record and enough ghost stories to last a lifetime.

Here are the top five scariest places in the Buckeye State that will terrify even the bravest of souls.

This Gothic structure is now a state historical site and offers guided tours, including ghost hunts, to interested visitors. It was also the location for the classic film “The Shawshank Redemption,” and hosts an annual Halloween event called Blood Prison, but all it takes is just one look at the place and it’s easy to tell it has to be one of the scariest places in Ohio.

A photo of the Ohio State Reformatory in Mansfield, Ohio, in 1911 .

Workers laid the cornerstone on what was known as an intermediate prison, between the Boys Industrial School in Lancaster and the Ohio State Penitentiary in Columbus, for nonviolent offenders on Nov. 4, 1886, according to the Mansfield News Journal. The building was used as an operational prison for 94 years, until 1981, and during that time there was a good deal of violence, death and disease. It’s not surprising in the least to find out that the place is haunted. Visitors have reported seeing shadows, hearing strange noises and conversations, and experiencing feelings of anger, dread and sadness.

A guard at the Reformatory is photographed in 1911 with the tiers of cell blocks shown over his head and the cavernous prison stretching out behind him.

In 1948, the reformatory’s farm boss, his wife and his daughter were kidnapped and killed by two enraged parolees outside the prison’s walls, according to the Mansfield Reformatory Preservation Society, but the building itself is believed to be haunted by the ghosts of Arthur Lewis Glattke, the superintendent at the prison from 1935 until 1959, and his wife, Helen. The warden’s wife died from an accidental shooting and several years later the warden died from a heart attack according to the Preservation Society. The couple’s disembodied voices have been heard in the prison’s old superintendent’s office.
A 14-year-old boy is also believed to haunt the basement, where he was reportedly beaten to death, according to the website Mysterious Heartland.

The Lorain Palace Theater opened in 1928 in Lorain, Ohio, near Cleveland. It seats just over 1,700 guests and was the first movie theater in the state to show talking pictures, according to the theater’s website.
Dave Hensley, a paranormal researcher and the founder of EVP Mediums, told The Chronicle-Telegram after investigating the Palace that there are so many spirits there, he couldn’t even count them all.
“We got a name from a gentleman named Ed, who said he worked at the shipyard. That’s profound because the shipyard was directly behind the Palace. He claimed that he was murdered, pushed down stairs,” Hensley said.
“There was a spirit who said he died of heroin. And we had spirits that were killed in the 1924 tornado that hit Lorain. That was pretty emotional. One of them said, ‘My body flew,'” Henslet told the Chronicle.

A view from the stage of the historic, and some say haunted, Lorain Palace Theater in Lorain, Ohio.

The theater’s operations director told the newspaper most people in the area probably know about the ghosts and spirits that roam the Palace’s hallways.
“I think everybody in Lorain County has been privy to the rumors of the unexplained activity in the Lorain Palace Theater,” Chris Pataky said.
In fact, a documentary on the haunted theater, called “Ghosts of the Palace,” is scheduled to debut at the movie house this weekend.

The Ceely Rose House is located on land that is now part of Malabar Farm State Park in Richland County near Lucas, Ohio. It is still a working farm and its history dates back more than 100 years, before the state owned the land, to a time when a crime of such great horror and tragedy forever scarred the place where it occurred and created what some consider one of the most haunted places in the state.

The Ceely Rose House, named after a teenage killer who once lived there, is a little white house not too far from the main farmhouse at the park and what happened there in 1896 still scares many visitors today.
Ceely Rose reportedly confessed to a neighbor what she did to her family. When a boy she had a crush on and wanted to marry told her that her family didn’t want them to wed, Ceely poisoned her family “by soaking flypaper in water and then secretly pouring the arsenic-laced water over the cottage cheese she served them,” according to Ohio State Park News. Her mother, Rebecca Rose; her father, David Rose; and her brother, Walter Rose; were all dead within weeks. She was committed to a mental institution until her death at the age of 83.

The Ceely Rose House at Malabar Farm in Ohio’s Pleasant Valley region is said to be haunted with the ghost of the teenage family killer.

Some visitors swear Ceely is still lurking in the house. They’ve reported hearing ghostly voices or seeing a young woman roaming through the hallways or glimpsing someone at a window.

The Stivers School for the Arts is a magnet school in the Dayton Public Schools district with some 900 students in grades seventh through 12. The school began operations in 1908, but its haunted history seems to stem from a mysterious murder that happened in the school’s basement pool in the 1920s.

According to the online magazine Dayton Most Metro, a teacher named Mary Tyler  was found dead in the pool with a locket in one hand and a broken pointer in the other. The teacher was reportedly involved with a senior student at the time of her death. He disappeared after her body was found and was never seen again.
Officials believe the unnamed student tore his picture out of the teacher’s locket, so no one would suspect him, according to writer Julianne Heisler.
The school eventually covered over the pool, building a classroom on top of it. A trapdoor still leads down into the pool, which is used for storage now, Heisler said, but it seems Mary Tyler never left.
Students and maintenace staff have “reported Tyler’s ghostly figure levitating in the abandoned pool and floating about the lower levels and the network of tunnels buried underneath the school, banging on pipes and wailing loudly wherever she goes,” Dayton Most Metro reported.

Students have also reported odd occurrances in the classroom built over the pool, including disappearing objects, changes in temperature and flickering lights, according to a story by MysteriousHeartland.com.
Local writer Karen Laven said she sensed something strange when she visited Stivers. “Stivers gave off a distinctly weird vibe, and not only when I was looking down into the bowels of the old swimming pool where Mary was found dead, but throughout the school,” Laven reported.
Local paranormal experts have said sightings happen frequently at Stivers.

5-The House of Wills
Cleveland, Ohio

The House of Wills is said to be haunted and, with the historic 34-room mansion’s long and storied history, it’s easy to see why.

A photo of the House of Wills in Cleveland, Ohio, in recent years. The 34-room mansion is thought to be haunted by many ghosts and spirits.

It was built in 1898 by the Germania Turnverein Social Club, according to the website of the current owner, Cleveland artist Eric Freeman. By 1912, it was turned into the Hospital for Immigrants and by 1920 it housed the Cleveland Hebrew Institute, until 1938. Prominent African-American entrepreneur and businessman John Walker Wills bought the property in 1942 to use as the location for his second funeral parlor.
Wills died in the home in 1971 and his family sold it in 2005. The home fell into disrepair until Freeman bought it in 2010 and started the challenging work of restoring and renovating the property.
Freeman said on his website that Wills is believed to be one of many ghosts that haunt the house, and on his Facebook page he posted a scary electronic voice phenomena, or EVP, recording from the house of what sounds like dozens of spirits from beyond trying to be heard by the living.

“Paranormal investigators and visitors claim to have seen shadowy figures moving silently from room to room before vanishing suddenly, along with a spectral man in a suit who stalks visitors throughout the building,” according to the website hauntedplaces.org. A swirling mist has also been seen in the old casket room and visitors have claimed to hear voices, the website said.
The old funeral home was available on Airbnb, according to Clevescene.com, which said for $200 a night guests get access to the entire house, including a large auditorium and various gathering rooms, but guests should be warned there was no electricity or running water.