Littleton, NC — Eighteen miles off I-95 nestled near the North Carolina-Virginia border there’s a tale of a beast only seen by few – a beast with eyes as black as night – a beast they call Bigfoot. It’s only in the faraway town of Littleton, North Carolina, where a man brave enough to catch this beast in the flesh opened up a museum for the public. His name is Stephen Barcelo and his one-of-a-kind museum is called The Cryptozoology & Paranormal Museum.

You will find everything from UFOs, to haunted dolls, to shadow people who live in the walls. The lore that this museum has proliferated has bolstered nearby small businesses, including Littleton Food and Spirits, who sell a Bigfoot Burger.

If you’d like to find out more about this spooky museum, visit: www.crypto-para.org 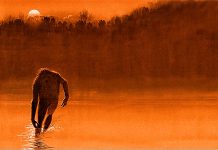