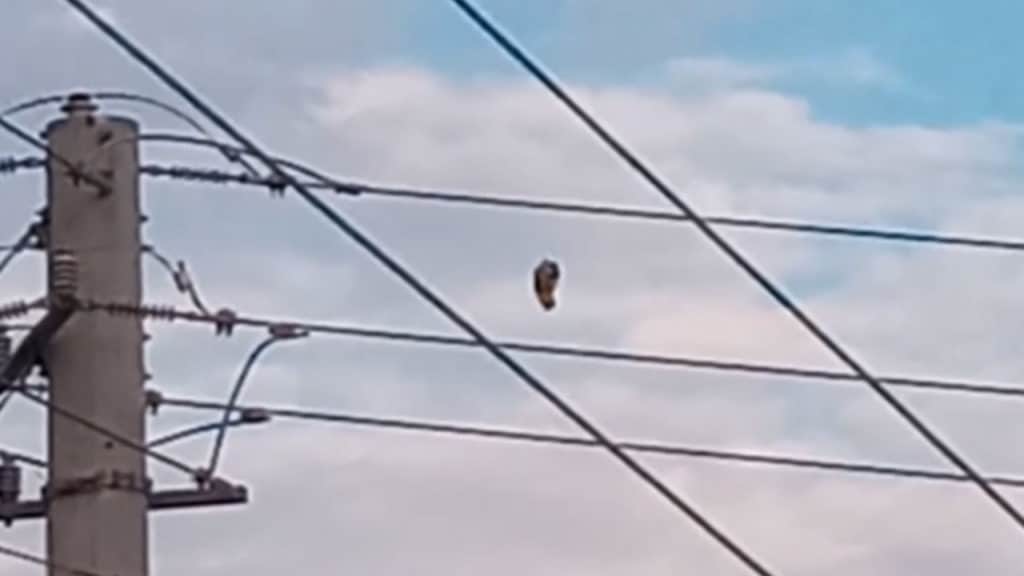 Witness report: The sun wasn’t quite up as I was driving north on HWY 95 in Ft. Mohave, AZ. It was just before 7:00 AM on 09/17/2021. I spotted a thing with LED-type lights just hanging still by the wires ahead of me and immediately thought it to be strange and futuristic. I noticed that the color was brown and it seemed to be about 2-3 ft tall and about 10-12 inches wide, and it had a light on its top and one on the very bottom. Both lights looked like LED flashlights. But they just seemed to glow a clear white. The thing was titled down slightly, almost as if it was watching something. There is a charter school right across the street. Anyway, I pulled over to the other side of the street, in front of the school and got my phone out and clicked the camera app and hit record. By that time, it started moving, so I was not able to record the lights. It’s possible the lights went out, but I don’t know. If I had to describe its shape, I would say it looked like one of those curved water bottles or a gourd. The thing turned to my left, rose, then turned a slight right and just casually went out toward the mountains. There was another girl in a black Suburban who had pulled over and was recording it out of her window. I said to her “What the hell is that thing?” She didn’t respond, that I could tell. When it looked like it was just going way and wouldn’t return, I stopped recording. As soon as I stopped, there was somebody in the turn lane, and I pointed out to the thing going away, and so he made the turn and stopped and I asked him if he sees it. He said, “Yes”. Then, I explained what it was and he seemed stunned and thanked me for showing him. The girl that was recording left without talking to me. Maybe she was freaked out. I don’t know. When I analyzed the video, I noticed that the thing changed shape throughout the recording. It had no propulsion system that I could see and it didn’t have any landing gear. I didn’t hear any sound coming from it all. But the noise of cars going by was pretty loud. My feeling is that it is a futuristic military drone and that the brown color is meant for camouflage. But, that fact that it was changing shapes, takes that to a whole different level.