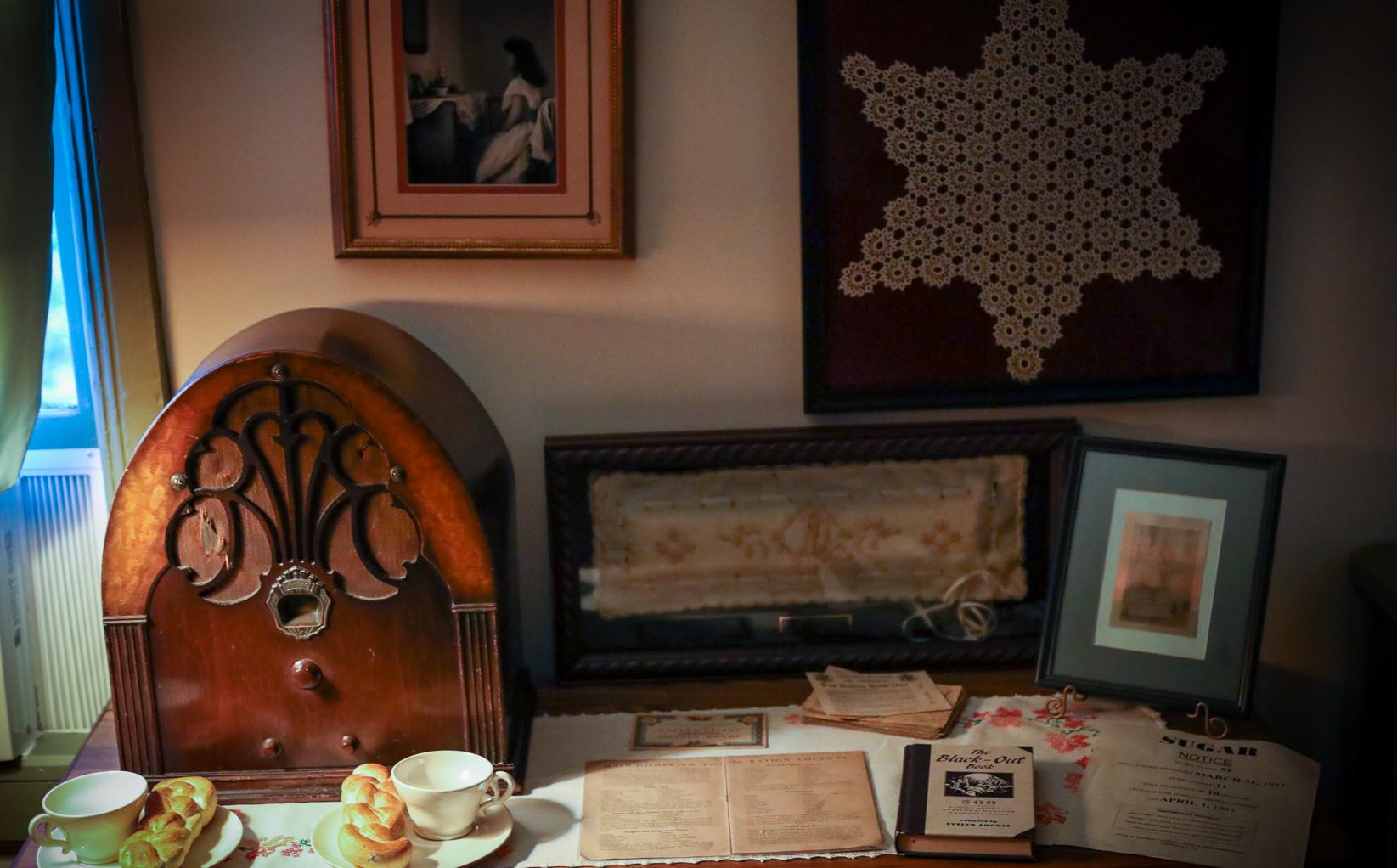 The Haunting of Hill House. Paranormal Activity. The Blair Witch Project. American Horror Story. If you’re intrigued by all things spooky and spirited, you’ve come to — or live in — the right place. In Prince William, particularly in the town of Dumfries, there is a fascinating history of haunted folklore. So much so, that the small, beloved town is on the map nationally for those looking for a ghostly place to visit.

“Many people visit us after watching Travel Channel and other shows filmed here around 2012,” said Lisa Timmerman, Executive Director of Historic Dumfries Virginia, Inc. and The Weems-Botts Museum.

The objects in the Weems-Botts Museum come from both the Merchant family and the Dumfries community, demonstrating the vast history of the house and strong community that comes together to support this non-profit. Photograph by Jesse McGill

The team has been informed by paranormal researchers that the area of Dumfries is extremely active when it comes to unearthly activity.

“Guests and residents have informed us of events that have happened to them, both day and night. I am skeptical of their observations, but it does make for some interesting folklore,” Timmerman confessed.

Many members of the local community have shared stories with Timmerman about paranormal events they claimed to have witnessed in their homes or at local businesses, including Dumfries Cemetery and Dumfries Elementary School.

“A teacher reported this occurrence to a [Weems-Botts] Museum docent. She explained that she and the children in her class had seen a child outside from the window of their classroom located to the left of the #10 door; the girl was playing around the side,” Timmerman shared. “She was dressed in a long skirt in a style that looked like Colonial period clothes. The children complained that she got to play outside, and they didn’t. The teacher directed the students to turn back to the board. When the teacher looked back at the window, the girl was gone.”

This is of interest to Timmerman, who knows the location of the sighting has housed schools since the 18th century in Dumfries. “On our Ghost Walk tours in October, we share some of [those]stories with the public,” Timmerman says. “Our popular tours highlight paranormal events that have taken place in our Annex building, Dumfries Elementary School, Dumfries Cemetery and of course, our historic home — the Weems-Botts Museum.”

The historic Weems-Botts Museum is said to be extremely haunted and has a rich folklore associated with it.

“You have to expect the unexpected when you are investigating our historic home!” Timmerman exclaimed.

Jeff Seguin, an independent paranormal researcher and the museum’s volunteer paranormal tour guide, has collected and cataloged these first-person ghost stories and accounts over the years.

“Jeff has asked me to text him when events take place that might be shared on future ghost tours,” she said. “He keeps a logbook of these events to see if there is a pattern, or perhaps environmental factors that might contribute to the ‘activity.’”

Timmerman herself has plenty of stories that may send a shiver down some spines.

“Back in November of 2019, I had Jeff stop by the historic home to investigate an odd security alarm fault that occurred mid-week, around three in the morning. One of our front door alarms had been triggered, and I noticed that a colonial-style latch on the inside of the door seemed to have been bent. I thought that perhaps something tried to push the door open from the outside,” she said.

Then, something happened. “While we were standing in the Colonial vestry room discussing what may have occurred, Jeff stopped our conversation and directed my attention to the sound of footsteps walking across the wooden floor in the bedroom directly above us. It was as if someone was walking across the Colonial bedroom — toward the stairs — to eavesdrop in on our conversation. We quickly went upstairs, but the room was empty,” said Timmerman.

In January of 2020, when Timmerman was giving a historic tour to a guest in the same area, the sound of footsteps directly above them caused her and her guest to look up toward the ceiling. “I’m sure both events were merely caused by the wind blowing through our old home, but it was very odd,” she said.

Sometimes, it’s not just a noise that Timmerman, Seguin or a guest hears: It’s a touch they actually feel.

“In September of 2019, I was wrapping up a final tour in the far side of the house. This area was once an exhibit area for a Dumfries historian, Lee Lansing. As I was chatting with the guests in this exhibit room, I felt a slight tug on the back of my jacket sleeve,” Timmerman explained. “It was odd, but [I] think it was a bug. The same happened a few weeks ago when I felt something on my foot. Although I could not find the bug, I did jump and slightly yell.”

Although Timmerman may react, she doesn’t get spooked easily, which makes her perfect for the job.

“I feel that all events can be explained through science,” Timmerman said. “However, I continue to report unusual occurrences to our volunteer who is documenting these events.” 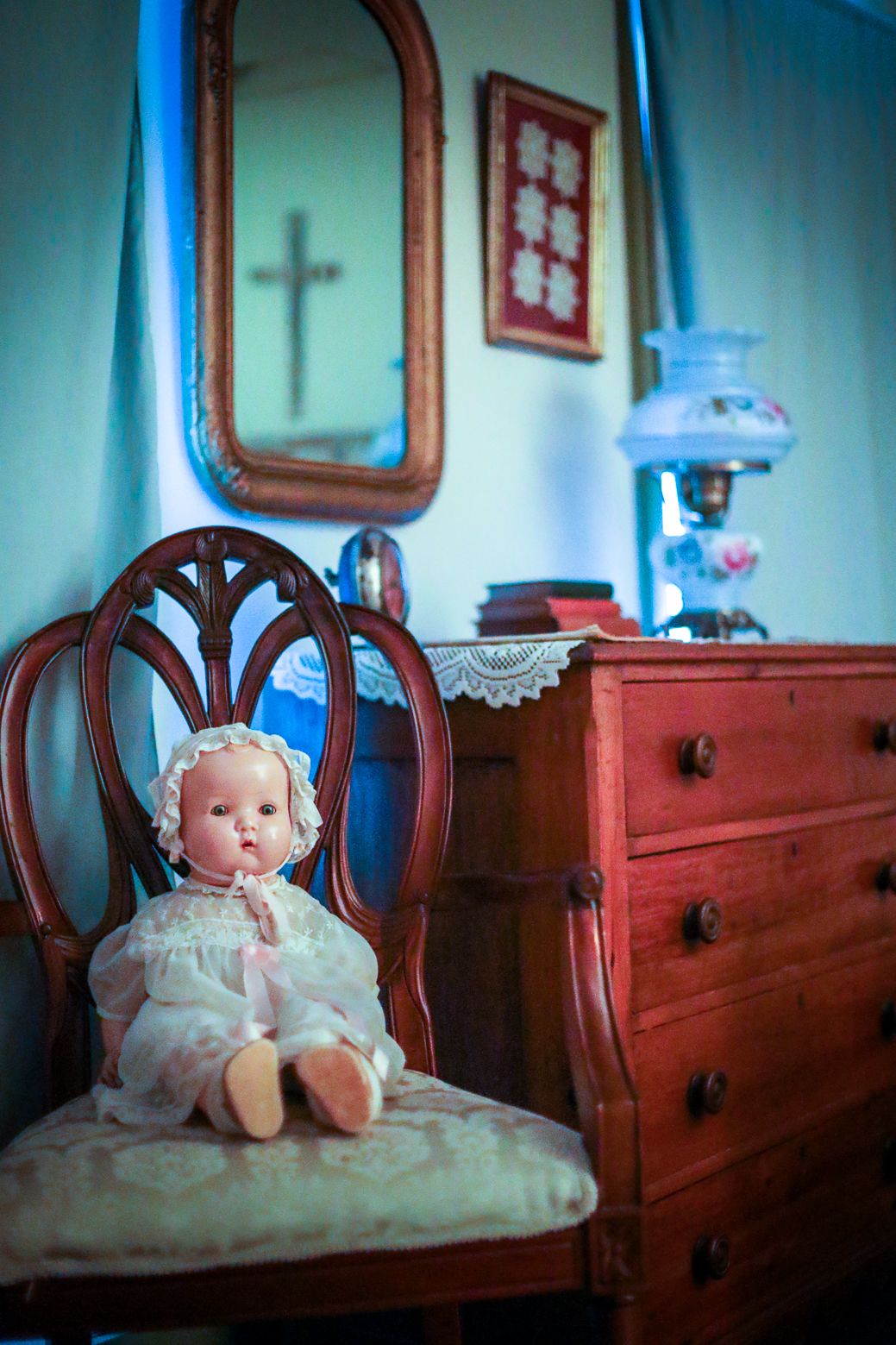 April, the Weem-Botts Museum’s cherished doll, is the source of
numerous ghost stories and the star of Ghost Walks every year. Photograph by Jesse McGill

Historic Dumfries Virginia, Inc. was established to catalog, share and promote the history of Dumfries through documentation and artifacts the team has collected throughout the years. Timmerman directs the non-profit historical organization and gives tours about the history of the town and area throughout the
year herself.

“I keep it strictly a history tour until we give focused Ghost Walk programs in October,” Timmerman stated.

October is the only month the Weems-Botts Museum shares stories of the town’s haunted folklore with the public, and the only tours they give during this time are ghost-related. The festive programming is a massive hit, with tours selling out a month in advance every year.

“We encourage people to bring their EMF detectors and digital voice recorders to catch their own evidence at the various locations,” Timmerman said. “Many guests also use a particular ghost hunting app [“Ghost Hunting Tools” by Weasel] on their phone during the tour. The app supposedly allows nearby ghosts or spirits to communicate by choosing random words from a 4,000-word dictionary. Some of the words that pop up often relate to the stories being shared, which makes it entertaining and very spooky.”

During the 90-minute walking tour of the area, visitors get to hear stories of paranormal events that have occurred in the museum’s Annex building, Dumfries Elementary School, Dumfries Cemetery and the historic Weems-Botts Museum. People in the community have also claimed to have seen and heard unusual things in Merchant Park, located directly behind the home.

“One story we tell on our Ghost Tour is of a guest who stopped by our Annex buildings,” Timmerman began. “She was impressed with a costumed Civil War reenactor she had met in [Merchant] Park. The museum staff quickly rushed to the windows, but we could not find the person she was referring to. We informed the guest that we did not have any costumed reenactors and she was very puzzled. Apparently, she had a
conversation with this individual, but when the topic of how modern-day events could be compared to events that occurred during his time period, the soldier had an unusual reply.

According to the guest, he said, ‘I don’t know too much about that, but the nice ladies in the museum could probably answer that for you.’”

For visitors who want a truly unique and potentially chilling experience, the museum also offers a limited number of tickets for a late-night investigation inside the historic Weems-Botts Museum. The guests who embark on this private tour work with Seguin, the independent paranormal researcher, to capture evidence of ghosts that may still occupy the home.

“Two years ago, a guest on this tour claimed she was gently ‘pushed’ on her lower back while seated on the floor of the Colonial bedroom with her back to the staircase,” Timmerman confides. “She described the non-threatening touch as ‘purposeful’ and with a tingly, static electricity quality to it. Perhaps someone on the staircase was trying to get her attention!”

Seguin feels that there is “nothing malicious or ‘evil’ in our historic home or on the property.” He believes that ghosts have varying personalities, and that the supernatural occupants of the Weems-Botts Museum in particular are shy and private. While they tend to keep to themselves, Seguin also recognizes that the ghosts sometimes enjoy interacting with museum guests to ensure their story is being shared authentically and truthfully.

While Seguin and Timmerman are purveyors of the paranormal, they are also the protectors. On tours, Seguin tells visitors that ghosts “must be treated with the same respect you would give a living person.” He and Timmerman do not allow guests to provoke or antagonize the resident spirits on any tours.

Seguin warns, “If ‘they’ want to interact, it is up to them.”

If you are interested in learning more about the haunted folklore of Dumfries or wish to find information on touring the Weems-Botts Museum, head to historicdumfriesva.org. Remember … visit at your own risk.

Mia Brabham is an author, writer, and media host. Her debut book, Note to Self, is a short collection of life lessons that is in the hands of readers all over the world. Mia is also the host of Two In The Morning, a podcast that explores and unpacks the cultural questions that keep us up at night. You can reach her at bymiabrabham.com.