Night vision binoculars spotted an alleged UFO hovering above a man’s house in Azpeitia, Spain. The mysterious object appeared to move incredibly fast towards the ground.

A weird video shows an alleged UFO hovering in the sky before dropping very fast towards Earth – with conspiracy theorists calling it “legit”.

In the clip, recorded on October 8 by Xan Bernardo with night vision binoculars, a large orb is floating in the night sky above Azpeitia, Spain.

The movement of the strange object is seen clearly with the infrared as it moves slightly from side to side above the rooftops, before dropping down extremely fast and out of sight.

It was shared on the YouTube channel The Hidden Underbelly 2.0 who described the mysterious footage and said it was “pretty cool”.

He said: “This orb can not be seen with the naked eye. This has been picked up with night vision.

“And we just see this thing hovering and then all of a sudden it just dives straight down.

“For me, this isn’t the behaviour of any object that we possibly have.

“This thing just shoots right down to the ground.”

Since it was uploaded, the video has been watched hundreds of times and sparked a debate about what the orb might be, with many viewers suggesting an alien craft.

One said: “Eww yeah, that’s a legit one. The curvy gyro movements about an invisible axis.”

“Like the other big video of a ufo dropping into the ocean, like this. As if they’re saying ‘You’re filming. Don’t look at us.’”

A third wrote: “Interesting especially how it dropped down to the ground! It also looked like it kinda faded out if that makes sense?”

Someone more skeptical about the idea of UFOs commented: “This looks like a hologram to me.” 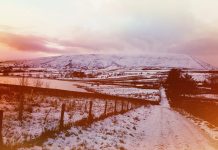 Some of the most haunted places in England – HeritageDaily