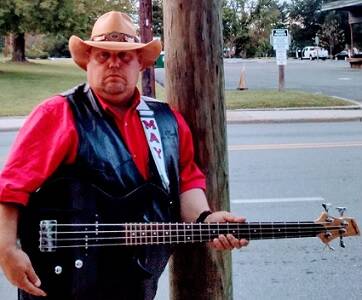 Sometimes when opportunity comes to call, it calls in the form of a giant chair turning around to reveal Blake Shelton or Kelly Clarkson choosing you for their team.

For local amateur singer Jackie May, that opportunity may be calling in the near future.

Virtual open calls for the twenty-second season of NBC’s singing reality show “The Voice” are beginning and May has been selected to participate in the auditions on Wednesday.

May has been signing around town at places such as the Mountain Man Auction House and Ayers Trading Post while also having lifted his voice in song at church as well. Now the lights will be a little brighter and the stage a bit bigger than one of his solo gigs on Pine Street.

“The Voice” audition is already a tough thing to achieve, with May reflecting that “a lot of people don’t get this opportunity.” So May has been practicing and getting ready for what will be an intense 90 seconds. In a short span, May will have to introduce himself, show off his southern charm and then dazzle the judges with a musical number of his choosing.

Picking the song is proving to be a difficult thing for May as there are so many choices.

“I am open to suggestions because I can’t really choose right now. I will definitely pray on it,” May said with a smile.

“I come from struggle and I’ve been told I wouldn’t accomplish anything,” May said. Shaking off the naysayers is not always an easy thing to do, but May is aiming to do just that. “Just go with your heart and prayers because some people will put you down but, like me, I’ve always gone by my heart and prayers.”

As the audition is growing nearer May is narrowing his song selection down to “Roll On (Eighteen Wheeler)” from country group Alabama, or perhaps “I Am a Man of Constant Sorrow” made famous by the movie “O Brother, Where Art Thou?”

No matter what he picks, Jackie May is going to give it his all because he believes in himself. To those out there wondering if they have the right stuff to audition for a show like “The Voice” May advised, “If you start listening to what others say you will never know what may come out of life.”

“The Voice” airs on NBC and season 22 will premiere in 2022 with judges Kelly Clarkson, Arianna Grande, John Legend and all time winningest coach Blake Shelton.