Home Paranormal News Why This Ghost Hunter From East LA Talks to The Dead –... 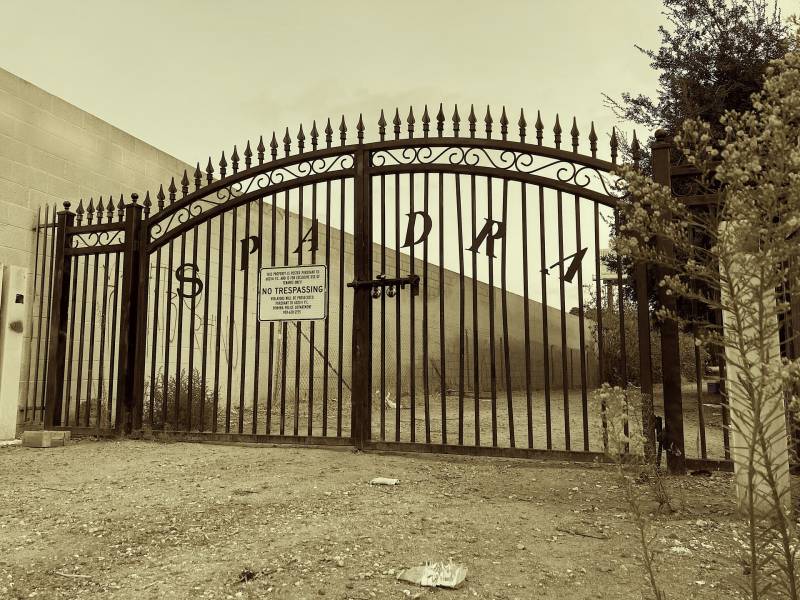 Victor Huesca’s been visiting hotbeds of the supernatural for the last 15 years. He’s seen some chilling stuff, he said, like the time he went to an abandoned sanatorium.

“So as I turn around to walk up the stairs, and I see an arm reach out to grab me,” he said. “But it had no body. It was just an arm by itself. I remember the way it looked, it was super hairy, but it was just an arm floating.”

It’s the kind of thing he lives for.

Reaching out to those who’ve gone the way of all flesh is an obsession with Huesca, something that began when he was a child growing up in East L.A.

“My dad passed away when I was around 5, 6 years old and I always wondered where he had went,” recalled Huesca. “It wasn’t till I got older where I wanted to investigate places and explore the beyond.”

He’s never tried to reach his father. “It was something I felt I wouldn’t know how to react to if I somehow contacted his spirit. I always just left that alone.”

As he grew up, Huesca became a fan of horror movies. That led to an interest in ghost-hunting TV shows. As a teenager, he bought paranormal investigation gear online and jumped into the field, looking for supernatural action. Now he’s got his own YouTube channel, “BARRIER BEYOND,” that chronicles his paranormal adventures.

Huesca’s first trip was to a derelict hospital in Downey. He hit a haunted trifecta — hearing voices, footsteps and screams. He’s hit locations throughout Southern California and traveled the country searching out spirit contact.

But for Huesca, his hobby isn’t just some frivolous thrill ride chasing otherworldly noises down dank hallways. Or noises that could just as easily be the wind, or raccoons mating.

After that initial taste, he was hooked on something bigger than fear.

“It’s weird, because I 100% believe, but I just want more,” Huesca said. “So the fact that at least I can get some sort of proof to know that there is life after death, it’s like comfort, so to say.”

But some of the interactions get a little too close for comfort, like the time he took a late-night trip to a sanatorium in Kentucky.

“Whatever I had seen there followed me back home and was trying to attach itself to me,” he said. “It was really bad emotionally, where I was close to not ghost hunting anymore.”

So why did he continue?

“It’s a passion of mine. It’s something that I just love doing and I cannot stop doing,” he said.

And we’re doing it at Pomona’s Spadra Cemetery.

Spadra is a small, forgotten place wedged against the roaring California State Route 57 freeway. It was established as Spadra Cemetry in 1868 and its last burial was in 1965. (Though it is open for tours.)

The cemetery is home to a little more than 200 permanent residents and a handful of unhoused people who camp out beneath the gnarled oaks and tall pepper trees that droop like weeping willows.

The place radiates a vibe that falls somewhere between sad and creepy. Most of the tombstones are missing, or broken off and jagged.

“This has long been a happy hunting ground for anyone with a Ford F-150 and a chain,” said Deborah Clifford, president of the Historical Society of Pomona Valley, which owns the cemetery. “You roll in, lasso a headstone and take it with you.”

Spadra isn’t usually open to the public, but people break in looking for more than just headstones. They come for the ghosts. After a night in the place, many file breathless Yelp reviews on the terrorizing entities they experience after dark.

This is a Yelp post from Jonathan R.: “After walking around with a bunch of friends for a while, we decided to leave. However, on our way out the girls in the group ran out from feeling a hand grab them. One girl stayed behind, and once we were out she took a picture of the exit and what we found in the picture was really scary. A tall slim like figure with a very distorted face appeared in the picture. Ever since then I have not gone back.”

Yelper Rudy M. was equally disturbed: “We were on the 10 freeway almost back home about 20 minutes later from leaving  & I felt this overwhelming feeling of death. I felt so panicked & controlled, like something attacked me in [my] homie’s car. I asked my grandpa to pray for me once I got home. This place is truly haunted and demonic.”

She should know. Clifford has spent a lot of Halloween’s at Spadra giving five-hour tours of the place, a fascinating glimpse into the Old West of early Pomona through visiting its dead. She has yet to be followed home by anything demonic or otherwise.

But that doesn’t discourage Victor Huesca.

He’s ready to take on the darkness, armed only with a lantern and two ghost-detecting energy meters.

They’re about the size of TV remotes. When paranormal energy is near, he said, one lights up. The other gets a bit more emotional, squealing out a high-pitched sci-fi tone.

As the sun sinks and the moon rises, we set out among the graves.

Our first stop is ground zero for supernatural activity here, the grave of a man who died in 1921.

“James Fryer is one of the famous ghosts here at Spadra,” explained Huesca. “He’ll make noises, he’ll show himself.”

“Out of nowhere I felt strange, and from the corner of my eye I saw this dark figure just look over my shoulder. It either wanted me to get out or make itself known but it was really creepy.”

So we waited for the dark figure. And we waited some more. Huesca summoned the spirit.

“Are you here James? … We just want to communicate with you James … Can you light up the device I have in my hand?”

But after five minutes of this, it looked like Fryer was a no show.

“He’s not having it right now,” said Huesca. But he’s not giving up. “Is there anybody else here? Anybody want to communicate with us?”

Huesca’s pleas fell on deaf, dead ears. The ghost meter didn’t squeal, and no shadowy figures looked over our shoulders.

But off in the shadows, there was someone. He was picking up trash. Since ghosts don’t care about litter, this was, presumably, a living human. Indeed, it was one Wayne Owings, who said he’s a local and has been here countless times. He said he doesn’t believe in ghosts.

But then he said this: “I seen him. I ain’t lying. Heard something and I looked. Standing right there.”

It seems Owings had an encounter with a man dressed in a black, old-fashioned suit, complete with vest and watch fob. Did he think that was the ghost of Fryer?

“Oh yeah. Sure was nobody else,” Owings said.

Spooky, yes, but second hand. We decided to call it a night at Spadra.

But just a couple miles away, there’s another place that just may just be the portal to the underworld that we’d been seeking.

It’s a Mexican fast-food restaurant. Their chicken is crazy good.

If you search for hauntings in Pomona, you’ll discover that this place is allegedly ripe with strange activity. Doors are said to slam on their own. There are supposedly footsteps heard where no human is walking. And back there among the guacamole and grilled thighs, word is you can hear disembodied voices.

Why is it haunted? I don’t know. But, it says so on the internet.

In the drive-thru, I ordered two tacos and ask the disembodied voice emerging from the speaker if the place is haunted. The voice paused and said, “No. Proceed to the window.”

But, it’s all about being persistent.

Victor and I went in and I told them what we’re looking for. The manager politely suggested we do our ghost hunting out in the parking lot.

In that brief moment inside, however, Huesca’s meter was on.

His face looked like a kid’s on Christmas morning. That is, if that kid had asked Santa for communication from a dead person.

“It actually spiked up,” gushed Huesca. “The [meter] spiked up to yellow, and I didn’t even see it do that at the cemetery.”

What does that mean?

“It means there’s something around, it detected some sort of energy!”

It’s not exactly a floating, hairy arm, but after a ghost-free night in an old cemetery, “some sort of energy” in a fast food joint is better than nothing.

Still, it’s not the full-throttle paranormal juggernaut Huesca had hoped for.

“I really wanted you to experience something,” he said, “but it’s part of the ghost hunting experience. Sometimes you’ll get something, sometimes you won’t.”