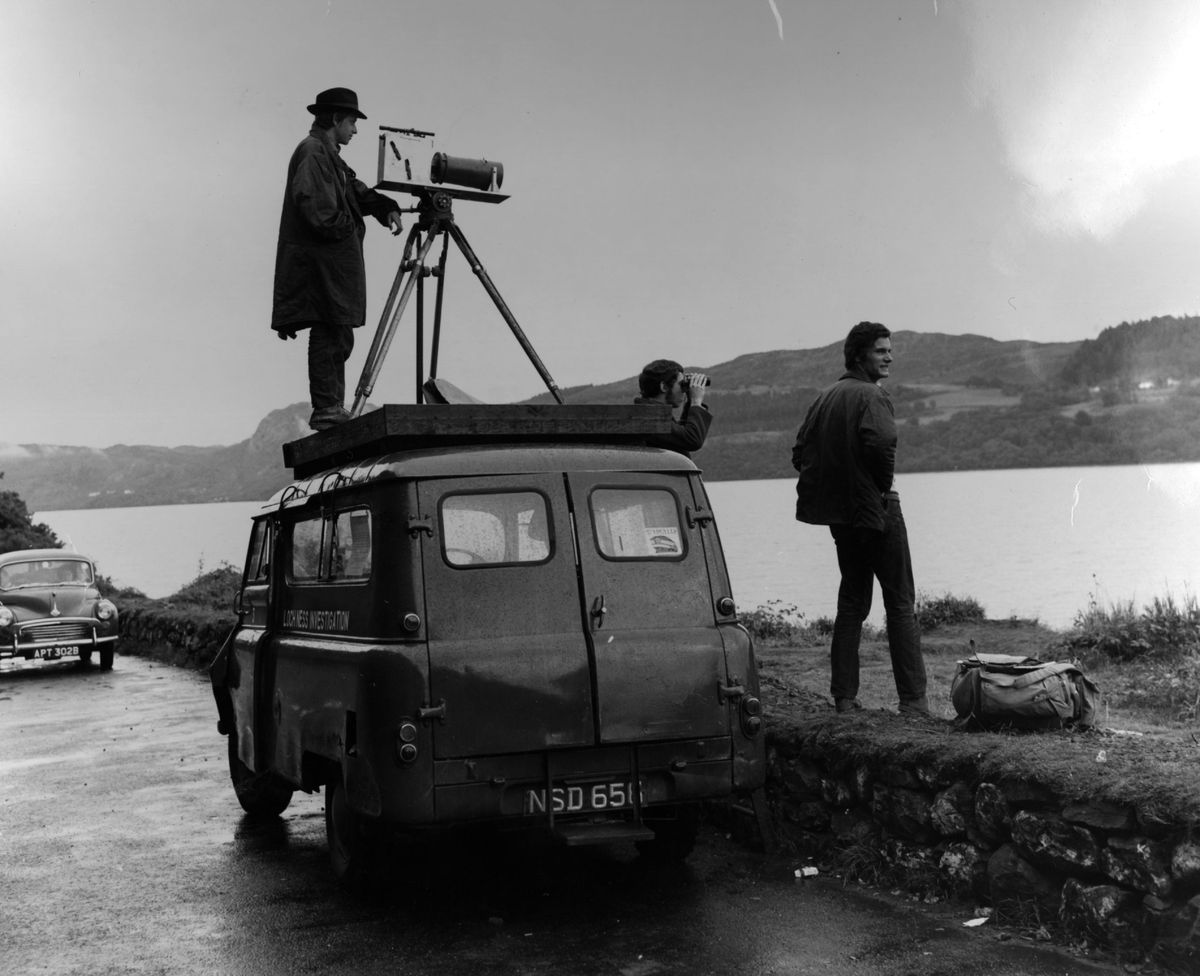 Many people know that the most famous photograph of the Loch Ness Monster was a total hoax. The “creature” depicted in Robert Wilson’s 1934 shot turned out to be nothing more than a toy submarine with a plastic head stuck on it.

But for some reason, the legend has persisted over the decades — and, of course, one fake photograph doesn’t prove there isn’t a monster.

So, more recently, a pair of scientists decided to take up the task of proving once and for all that the Loch Ness Monster can’t possibly be real.

In their book Abominable Science!: Origins of the Yeti, Nessie, and Other Famous Cryptids, Daniel Loxton and Donald R. Prothero offer a thorough debunking of a menagerie of mythological animals, from Nessie to Bigfoot. Prothero, a paleontologist and geologist, walked me through all the reasons the Loch Ness Monster couldn’t possibly exist.

Observers scan the Loch in 1968 (without success). (Fox Photos/Stringer/Getty Images)

Start with the most obvious point: According to the legend, there’s supposedly a giant sea monster that (probably) looks like a dinosaur living in Loch Ness, a freshwater lake in the Scottish highlands. Though the monster was photographed most famously in the 1930s, fans say the myth has been around for centuries.

The monster, lovingly called “Nessie,” is one of the most formidable examples of “cryptozoology,” the study of animals that haven’t been proven to exist. For a giant dinosaur-like animal that lives in a lake, we’d need a lot of evidence. But we haven’t found anything yet.

There is a long history of monster “sightings” around Loch Ness. In 1852, for example, villagers brought out actual pitchforks to battle a “sea serpent” (it turned out to be a pony taking a bath). In 1933, a Londoner named George Spicer said he spotted the beast carrying a lamb in its mouth. From there, accounts ballooned and took on a life of their own.

But these accounts have always been unreliable and often differ wildly on what the monster even looks like (early reports suggested the Loch Ness Monster was a seal-like creature, not a dinosaur). So far, hoaxes aside, no one has produced a single authentic photograph. That should make us extremely suspicious. But that objection is just the beginning.

A 1951 drawing of a plesiosaur, the marine reptile many consider a model for Nessie. (Universal Images Group/Getty Images)

“The bigger issue,” Prothero says, “is that the biological, geological, and physical evidence is against the thing existing.”

As the Nessie myth developed, many cryptozoologists promoted the theory that it was a surviving plesiosaur — a marine reptile that swam in the water and that’s believed to have been extinct for 65 million years. But there’s one big problem: We haven’t found any plesiosaur bones in Loch Ness.

“We have an incredibly good fossil record of animals,” Prothero says, “and never once has there been a plesiosaur bone found in the lake.” Ever since the 1970s, scientists have dredged, scooped, and explored the floor of Loch Ness for bones. The flat floor of the lake would be ideal for finding bones, but no one has discovered them. Sonar scans of the lake have also failed to turn up Nessie fossils.

If Nessie did exist, it would appear to be the first and only of its kind. For a lot of reasons, that’s unlikely.

A picturesque view of Loch Ness in 2014. (DEA/S. Vannini/Getty Images)

“This is something any biologist could tell you right away,” Prothero says. “There’s a wider range it would require.”

If there were a Loch Ness Monster, there would need to be an entire population of the creatures so they could reproduce. But no one has ever produced any evidence that there’s a herd of monsters — there aren’t even wild rumors or hoaxes to this effect.

Even more important, Loch Ness is simply too small to sustain a plesiosaur or similarly sized creature. Researchers with the Loch Ness and Morar project say there are only about 22 tons of fish in the lake. That sounds like a lot, but for giant breeding plesiosaurs, it would be nowhere near enough. Loch Ness just isn’t big enough or fertile enough for a monster this size.

There’s another, bigger problem. Nessie is usually described as a reptile — like the plesiosaur. But Loch Ness simply isn’t a suitable habitat for such a creature.

“The water is too cold for a reptile,” Prothero says. “There are only a few species of reptiles that live in Scotland, and a cold-blooded animal can’t live there unless it’s adapted. Plesiosaurs are tropical creatures, which we know from their evolution and where fossils are found.”

Of course, fans of Nessie might respond by saying the beast is actually warm-blooded, akin to the dolphins and seals spotted in the loch. But a gigantic warm-blooded, lizard-like creature that looked like Nessie is even more unlikely than a plesiosaur, since it would be different from anything we’ve encountered in the fossil record. And it’s even more unlikely considering that the lake hasn’t been around long enough for such a unique animal to evolve on its own.

A snowy model of the Loch Ness Monster is an apt illustration of one of the ways the monster is debunked. (Glyn Kirk/ Stringer/Getty Images)

One of the most damning arguments against the Loch Ness Monster is that it would had to have moved into the Loch Ness relatively recently. That’s because Loch Ness was completely covered in ice as recently as 18,000 years ago. “All the lakes were underneath at least a mile of ice,” Prothero says. “There was no lake there — those lakes are young features, and there’s no place for that animal to be if there’s no lake.”

Now, in theory, Nessie could have originated in the Atlantic Ocean and then moved into Loch Ness sometime in the past 20,000 years. But that raises another problem: There’s not really a plausible path by which the monster could have done so.

“Loch Ness at least has a small link to the sea, but it’s a trickle, and it’s above sea level,” Prothero says. And it used to be even tougher to get from the sea to the Loch. “When the ice was melting back, the sea level was even lower and the water would have been even colder.”

That means Nessie would have had to swim against the current through extremely cold water to get to the lake, which is unlikely for a giant monster (reptile or mammal). Possible routes such as the River Ness are far too shallow for a sea monster to go back and forth. Finally, because Loch Ness is above sea level, even an underwater tunnel to the Loch would be difficult to traverse because of the differences in elevation.

For a sea monster, a journey like that is a tall order. For a gray seal, however, it’s more likely (and that may be why people see them and possibly mistake them for Nessie).

Despite its total implausibility, however, the legend of Nessie persisted throughout the 20th century. And there are a few possible cultural explanations.

In the late 1800s and early 1900s, Loxton and Prothero point out, dinosaurs were becoming popular — thanks to everything from Arthur Conan Doyle’s The Lost World to breathtaking exhibits in museums. So perhaps it’s not surprising that people wanted to find a dinosaur-like creature in the lake.

“People are influenced by whatever the culture’s talking about”

Then in 1933 the movie King Kong was released, showing prehistoric creatures run amok. Shortly after, we had the first modern Loch Ness Monster sighting. Loxton and Prothero make a convincing case that early testimonials were influenced by the imagery and mythology seen in the movie.

“People are influenced by whatever the culture’s talking about,” Prothero says. “If there’s a big enough meme, and everybody sees it, whatever they do actually see is tempered in the light of their cultural expectations.”

What’s surprising, however, is that the myth still persists today. There may be economic reasons for that. The Loch Ness Monster draws a million people a year to the region, pulls in an estimated £25 million to the local economy, and remains an icon. The strange persistence of the Loch Ness myth isn’t just a story about a creature — it’s one about a culture that wants it to be real.