Home Paranormal News Netflix’s cute, whimsical “City of Ghosts” has layers for both parents and... 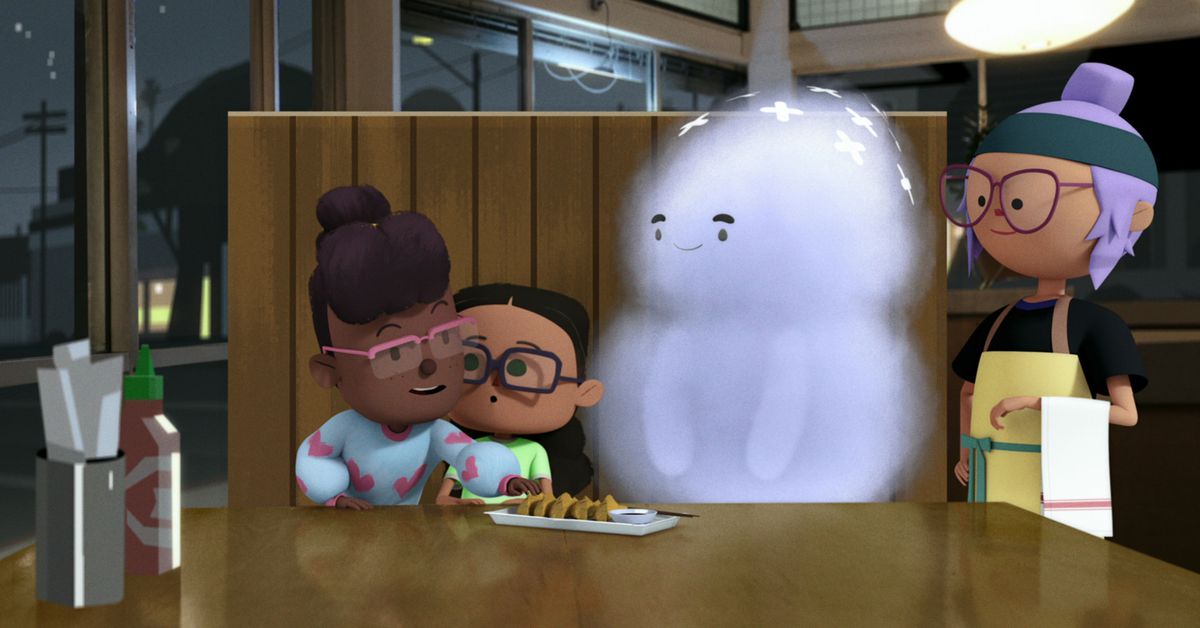 Small, grave children are having a moment. In HBO Max’s upcoming Station Eleven, actor Matilda Lawler plays an 8-year-old who survives an apocalypse that only deepens the concerned frown she already had to begin with, and Netflix’s Baby-sitter’s Club features a scene-stealing little girl who ominously warns people about ghosts and seems to be heading into her goth phase early.

But a whole show of small, grave children? For that, you’ll have to turn to Netflix’s City of Ghosts, a lovely animated kids show about ghosts, reality television, and the history all around us. The series came out all the way back in March. That I, someone who follows TV closely, am only just now finding out about it suggests it is yet another program Netflix isn’t sure what to do with.

They should figure out what to do with it! City of Ghosts is a real treat, one that even I, a childless cynic, can enjoy with an open heart. I thank my Vulture colleague Kathryn VanArendonk, a known mom, for turning me on to this show, because I think there’s plenty there for non-parents to enjoy.

Set in Los Angeles, City of Ghosts follows the four-member “ghost club,” a group of kids who take on ghostly mysteries around the city. Their adventures are presented as a faux-reality show, with ghost club leader Zelda (the smallest, gravest child of them all) roping her older brother into filming their exploits. (In a very fun touch, we sometimes hear said brother but don’t see him.) Talking head interviews and establishing shots of locations are accompanied by titles written in marker on cardboard, which tiny hands hold up in front of the camera. The kids conduct surprisingly professional interviews. It’s all very handmade and cute.

Every episode follows a similar format. The kids find out about a nearby haunting, they travel to that location, they gather evidence, they compare notes, and then they go talk to the ghost. The ghosts are presented not as terrifying entities but, instead, as cute, puffy clouds who are really just looking for someone to tell their life stories to. Usually, the kids, the ghosts, and the people being haunted come to some sort of rapprochement, and everybody goes home happy.

Adventure Time writer Elizabeth Ito created City of Ghosts, and its particular blend of elements is unlike anything else out there right now. The animation focuses on characters who look rather like Funko Pop figurines, with too-large heads and stick-thin bodies, but the backgrounds are real photographs of Los Angeles locations that have been given a digital filter that makes them almost appear to be watercolor paintings. The animation style took me about half an episode to get used to, but once I was into it, I could appreciate just how gorgeous it is and how well it works for the stories the show tells.

Those stories are also a unique blend of elements. Though the series is a mockumentary — believe it or not, Los Angeles is not filled with cute, cloudlike ghosts that you can call forth by figuring out what they most want — much of the dialogue has the feeling of real interviews. The show is also deeply researched. The ghosts the kids meet all act as windows into different parts of Los Angeles’s history, and their stories are very real glimpses of a world that predates the births of the ghost club members.

(Sidebar: There is a whole episode where the kids get interested in skateboard and zine culture while visiting the neighborhood of Venice, and their evident bewilderment at seeing state-of-the-art-for-the-1990s VHS tapes, cassettes, and photocopiers made me feel more ancient than I ever have before.)

The kids are a big part of the show’s almost-documentary feel. Ito has cast real kids to play the ghost club’s members, and their slightly halting delivery offers a feeling akin to the Peanuts specials. The series is also cast with an eye toward diverse representation that doesn’t really call attention to itself. The four members of the ghost club capture the racial diversity of LA, and one ghost club member, Thomas, uses they/them pronouns. Rather than belabor Thomas’s identity, the show simply has various characters refer to them with the right pronouns several times before Thomas points it out themselves in an introduction.

At its core, City of Ghosts succeeds because it’s a show about the histories that hide within the places we live. The ghost club travels all over Los Angeles in the series’ first six episodes, and they dig into the messy intersections of personal identity and history. The premiere, for instance, considers the history of LA’s Boyle Heights neighborhood, which was home to many Japanese Americans for decades, before becoming home to a predominantly Latino population. It’s now a neighborhood fighting back against gentrification, and City of Ghosts nods to all of this without over-emphasizing any points.

Other episodes talk about the historically Black neighborhood of Leimert Park and the Indigenous populations who lived on the land that became Los Angeles before European colonizers arrived. The show is interested in the ways buildings shift and change depending on who’s occupying them, even though the building structurally remains the same. Kids who just want to watch a show with a cute ghost will find that in the text; parents (especially Angeleno parents) who want to dig into the history will find plenty to talk about in the subtext.

And look: I live in Los Angeles. I love this city. I love its history, and I love the ways its buildings and neighborhoods reflect the vast, ever-shifting picture of what it means to be American. Yet even if you don’t live here, I think City of Ghosts offers a chance to start a conversation about the ways urban landscapes grow and change over time and the tiny part all of us play in making them vibrant.

Netflix has yet to announce a renewal for City of Ghosts, and I dearly hope we get more than the six episodes that exist. This is a winning, whimsical look at complicated topics that never becomes too self-serious or forgets that it has a message to impart. Kids’ TV has too few shows that hit that benchmark, and it would be sad to see one of the few that does go away.

City of Ghosts’ six-episode first season is streaming on Netflix. For more recommendations from the world of culture, check out the One Good Thing archives.