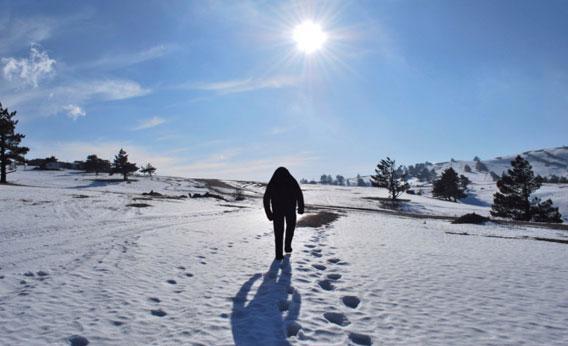 Scientists at Oxford University and Switzerland’s Lausanne Museum of Zoology plan to use DNA evidence to determine once and for all whether Bigfoot is real, Reuters reported Tuesday. The museum has a collection of alleged sasquatch remains and will ask other institutions to send their own materials for analysis. When’s the last time a mythical creature was proven real?

Nine years ago. Hunters in Tanzania had for years spoken of a monkey they called the kipunji. Conservation biologists were skeptical, because the traditional tales of the Wanyakyusa people who populate the mountainous region include both real and mythical creatures. In 2003, however, biologists found the 3-foot-tall arboreal primate with brown body hair and a black face. The animal’s loud, low-pitched “honk bark” helped to distinguish it as a species. Researchers now believe there are between 1,000 and 2,000 kipunjis in the area.

The kipunji is the most recent so-called cryptid to turn up in the wild, but it’s far from the first. Several well-known species began as rumors or legends. Throughout the 19th century, explorers of Africa reported glimpses of a zebra-like creature in the Ituri Forest of the Congo. Europeans began to refer to the creature as the “African unicorn.” In 1890, Henry Morton Stanley—of “Doctor Livingstone, I presume” fame—confirmed that the Wambutti pygmies who lived in the area spoke of a sacred animal that fit the description. (The Wambutti called the animal the O’api, but Stanley reported it as “atti.”) A decade later, explorers obtained hide and bones [PDF] from the animal, proving it was more closely related to the giraffe than the zebra. Today, the okapi is the mascot for the field of cryptozoology.

Not all former cryptids are as shy as the okapi. In the 19th century, men sent to the island penal colony of Komodo complained of a man-eating land crocodile. The first scientific reports of the Komodo dragon, however, didn’t come until 1912, and the first skins were brought back in 1923.

Cryptozoology enthusiasts make a lot of claims about other cryptids that turned out to be real, but it’s not always clear that the real creatures and the ones from the legends are the same. For example, sailor lore is full of tentacled sea giants, such as the Kraken and the Lusca. The ancient Greek naturalist Pliny the Elder wrote of an enormous squid with arms “knotted like clubs.” These references predate the first credible discovery of a giant squid carcass in Iceland in 1639, and the widespread acceptance of the animal’s existence in the 19th century. Does that mean the Kraken and the Lusca were giant squids? Or exaggerated versions thereof? It’s impossible to know for sure.

Bigfoot sightings go back for several decades at least, but it would be very surprising if a large humanoid had managed to live mostly undetected in North America. Bigfoot believers can take some encouragement from the fact that the world’s most famous former cryptid is a nonhuman primate. English sailor Andrew Battell, who was held captive by the Portuguese in West Africa around 1600, claimed to have seen a monster on the Dark Continent: “The Pongo is in all proportions like a man; for he is more like a giant in stature than a man … They cannot speak, and have no more understanding than a beast.” (Descriptions of hairy, manlike creatures were scattered throughout early Western literature as well.) In all likelihood, Battell was describing the gorilla, although the animal would remain just a rumor to Western scientists until an American missionary brought a gorilla skull to an anatomist in the mid-19th century. Perhaps our reluctance to accept the existence of near-human creatures comes from some revulsion at their appearance. As evolutionary biologist Richard Dawkins notes, “where other animals such as cats or deer could be seen as beautiful in their own way, gorillas and other apes, precisely because of their similarity to ourselves, seemed like caricatures, distortions, grotesque.”

It should be noted that the overwhelming majority of new species are not cryptids. Many species are discovered in remote and extremely mountainous areas where few humans have ever ventured. Seventy new animal species have recently been discovered in a pocket of the Foja Mountains of Indonesia, for example, and researchers are poking around the Andes, the Himalayas, and New Guinea for other species windfalls. Sometimes a new species looks so much like a known relative that scientists don’t identify it for decades. In 2005, biologists finally declared the Scott Bar salamander a distinct species from the Siskiyou Mountains Salamander, which had been identified outside Los Angeles in 1965.

Got a question about today’s news? Ask the Explainer.

Video Explainer: Why Don’t Women Sing in a Falsetto?

This video was produced from an original Explainer by Will Oremus. Want more questions answered? You can now watch video Explainers at Slate’s News Channel on YouTube.