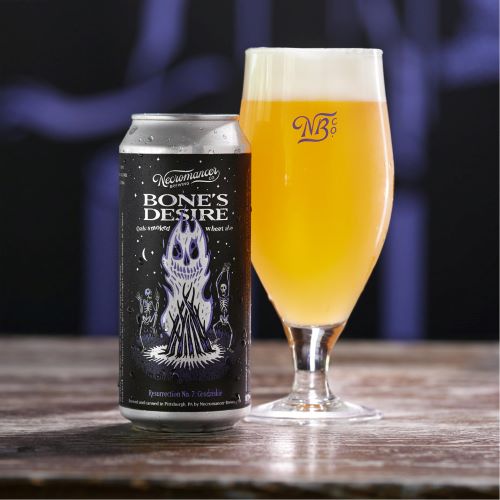 The person who coined the phrase “One man’s trash is another man’s treasure” probably wasn’t referencing beer cans, but I am. Modern breweries aren’t just slapping a generic sticker on a can and calling it a day; their labels are miniature masterpieces. And the trend is continuing thanks to three Pittsburgh suds-makers who are collaborating with local artists.

I have a row of cans lining the top of my refrigerator like participation trophies for alcohol consumption. Because there’s a limited amount of space in my apartment, I’m forced to recycle most of these aluminum works of art, but I spend a lot of time snapping pictures of cans and posting them on Instagram. Now, it looks like I’m going to be doing that for a while.

Make no bones about it, Necromancer Brewing has some awesomely creepy can art. What do you expect from a brewery that specializes in bringing old beer styles back from the dead?

In 2021, the Ross Township business released 52 unique beers, including 12 in its Resurrection Series. The historic beverages, which range from Kentucky Common ale to Zwert beer, boast cryptic imagery, mostly in the form of beer swilling skeletons. Witches, black cats, mummies, snakes, zombies and a knife-wielding turkey make appearances, too.

These macabre mascots were conjured up by Top Hat, a design firm that’s run by Necromancer owners Ben Butler and Aaron Easler. Over the years, they’ve created hundreds of unique label designs for breweries from Alaska to Florida and have even helped to revitalize Pittsburgh’s iconic Iron City Beer.

“We start with a conceptual discussion about the beer’s spirit,” Butler says about the design process. “We try to picture what it’s going to smell and taste like. If it’s a traditional, international or resurrection style, we often evaluate the historical and regional significance of the beer. All of this leads us to naming, and then we let Ian (George), our illustrator, go wild on his interpretation of that name.”

Although the label monsters don’t have names, like characters in Quentin Tarantino movies, they exist in the same universe and, according to Butler, might end up in a comic book someday.

The dead are definitely keeping sales alive and well.

Brewmaster Lauren Hughes helms the tanks three to four times a week, churning out 500 barrels a year and Necromancer still can’t keep up with the demand. Most offerings unveiled on Thirsty Thursday are gone in a week.

So, the next time you pick up a four-pack, take a moment or two to take a closer look at the can. Most of the designs include imaginative details that aren’t immediately apparent. Other times the reference is in your face.

“Probably the most blatant Easter Egg we’ve prepared so far is a beer called Top Hat, which is a Pennsylvania Swankey resurrection coming out in the next several weeks,” Butler says. “It features a well-dressed skeleton on a stage.” 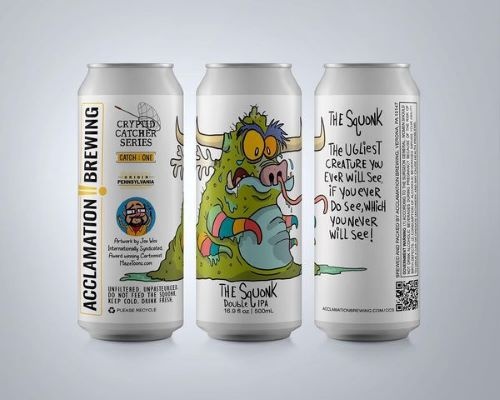 Verona’s Acclamation Brewing is drawing on the expertise of a local artist for its latest round of beers.

Award-winning cartoonist Joe Wos is illustrating a limited number of the brewery’s labels, which will be released through May.

The Cryptid Catchers series will feature renderings of mythical creatures, from the Chupacabra to the Mothman. For the first beer, Wos and the Acclamation team pay tribute to Pennsylvania’s Squonk, a wart-covered beast that reportedly roams the wilderness … crying.

According to the 1910 tome “Fearsome Creatures of the Lumberwoods” by William T. Cox, “the animal weeps constantly. When cornered and escape seems impossible, or when surprised and frightened, it may even dissolve itself in tears.”

And you can drown your sorrows in The Squonk double IPA.

This is the first brewery collaboration for Wos, whose original artwork will be on display and available for purchase in the taproom at 555 Wildwood Ave. On Feb. 18 at 5 p.m., Acclamation will throw a family-friendly monster bash to celebrate the libation.

Wos, who runs Central Catholic High School’s cartooning program (the only one of its kind in the country), will sign cans for adults and distribute cryptid coloring pages for kids at the event. Patrons can also take part in cryptozoology trivia games and enjoy pizza from a food truck.

“Beer cans are more than just containers for liquid happiness,” Wos says, “they are collectible works of art.” 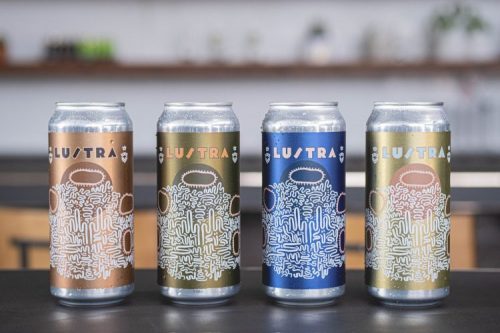 Dancing Gnome is known for making artistic statements with its brews (and its recently opened HQ). Not surprisingly, it is kicking off 2022 in style.

On Jan. 26, the Sharpsburg brewery launched a yearlong project highlighting the work of a different local artist each month.

“It’s exciting to be able to feature such a wide variety of local artists in what feels like a pretty natural collaboration between two flourishing communities in Pittsburgh,” Devine says.

Lustra, the company’s flagship American pale ale, gets a makeover from Atiya Jones, who also left her mark on Trace Brewing’s Coolship Room last year. She designed four variations on the label, which are available in a limited-edition four-pack at the brewery (1025 Main St.) or online for statewide shipping in Pennsylvania.

Upcoming artists in the series include illustrator Morgan Whitlow for the brewery’s Spy Dolphin Double IPA in February and painter Wavy Wednesday (Kamara Townes) for the Jam IPA in March. Other artists will be announced as the series progresses.

Dancing Gnome has previously produced a monthly beer series with different nonprofit organizations that features work from local artists, including a series of Tree Pittsburgh-themed beers. The brewery is working on an upcoming collaboration with Grow Pittsburgh.

This new series marks the first time the brewery has used artwork as the focus of the project, rather than an element.

“Sharpsburg has seen a wonderful influx in artists and appreciation for art, with multiple studios and galleries opening over the past few years,” says Andrew Witchey, owner of Dancing Gnome. “It’s exciting to be working with local Pittsburgh artists to feature their work in a different manner, and be a part of the local Pittsburgh art scene and hyperlocal Sharpsburg scene.”

The NEXT Beer is a column highlighting different brews, breweries and events in and around Pittsburgh. If you’ve got a beer-related news tip, send me an email. Cheers!