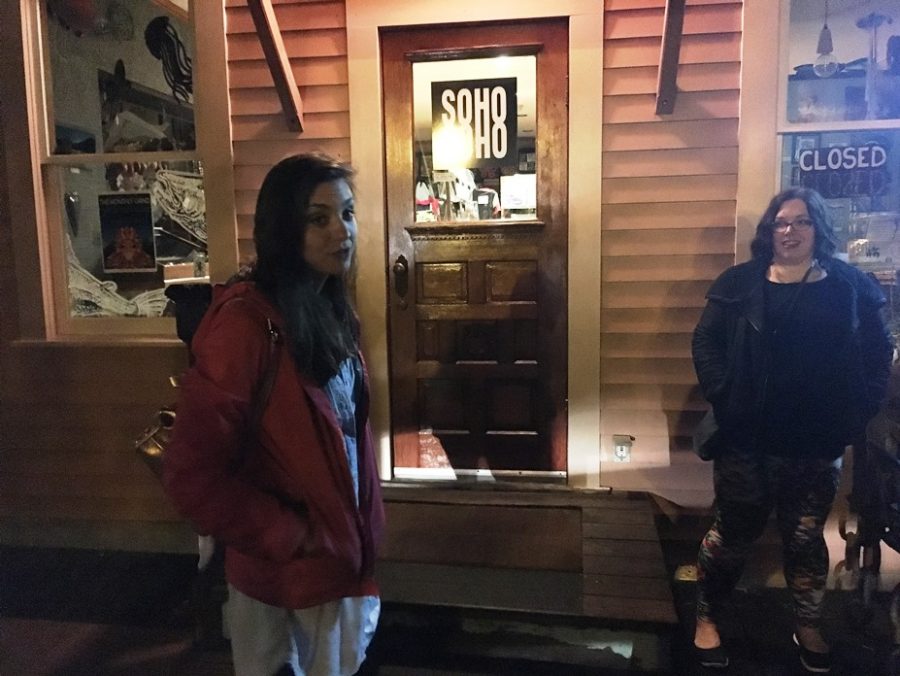 Ketchikan is home to plenty of supernatural phenomena. That’s the theory, at least, behind a new venture: Ketchikan Ghost Tours.

On a dark and misty night, ghost-tour guide Kelli Klees leads about a dozen people to some of downtown Ketchikan’s haunted spaces.

“Do you ever feel like someone is watching you?” Klees asked.

We start on Creek Street, the city’s historic and rather shady red light district built along the shores of Ketchikan Creek.

Klees explained that in its heyday, Creek Street boasted more than 30 brothels. And this was during prohibition. So, many of the houses had trap doors to bring in bootlegged liquor for their male clientele.

“A lot of those men also found themselves being thrown out of those trap doors,” Klees said. “So part of the history of this creek is there were an awful lot of dead salmon and dead bodies.”

Klees said when she first arrived in Ketchikan, she was warned to never walk on Creek Street alone at night. She didn’t heed that warning.

“I’m from Chicago, I’ve got a knife, we’re fine,” Klees said, recalling her reaction at the time. “So, I proceeded to walk down Creek Street alone at night one night and I’ve never been more scared in my life. Because there were about three different people that came out of nowhere. They might as well have gone, ‘Boo!’ There’s shadows everywhere; there’s a weird energy happening in this place.”

For example, Klees said there are reports of ghostly shadows and noises inside Dolly’s House. That Creek Street home, now a private museum, belonged to Dolly Arthur, Ketchikan’s most well-known sporting woman.

Other former brothels on the creek, now shops, reportedly are home to ghosts that move displays around during the night.

As we walk along the boardwalk, a light suddenly flickers.

Or, maybe, a motion-activated security light?

“You gotta open up your imagination on a night like this,” Klees said. “What’s real? What’s not? What’s ghosts? What’s automated lights? You never know.”

The ghost tour is the brainchild of Diane Fast, a musician who recently moved to Ketchikan. She said she had taken ghost tours in other cities, and always had fun.

“I just noticed how many people enjoy ghost tours,” Klees said. “And I enjoy them myself and I was like, ‘Wow, you could totally do one here.’ And that spawned the idea for an entire walking tour company.”

Some of the other walking tours Fast offered over the summer got more interest from tourists. But the ghost tour appealed mostly to local residents. And that’s who was on the tour with Klees.

The next stop after Creek Street is Ketchikan’s original hospital, next to the Episcopalian church on Mission Street. That 100-plus-year-old building was vacant for a long time and fell into disrepair, but now is under renovation by Historic Ketchikan.

“There’s an energy in there,” Klees said. “The quote is, ‘You could cut it with a knife.’”

As Klees finishes up her story about the old hospital, a woman on the tour tells her own story about the former Bon Marche building across the street, where she worked in the late 1990s.

She didn’t want to give her name, but said it was OK to use the story.

Another stop for a future ghost tour.

Fast said she’s not absolutely sure ghosts are real, but she is sure there are things in the world that we don’t or can’t understand.

“I’ve had experiences that I can’t really quite explain,” Fast said. “I don’t know what it is, but I don’t know what it isn’t. I don’t claim to know if it’s an actual person that’s haunting a place or just residual energy like when you take a Polaroid photograph. I have no idea. But it’s fascinating and people are interested in it.”

One of the last stops on the ghost tour is the Gilmore Hotel, where there are reports of actual ghostly people. Klees said a man in a top hat and a woman make regular appearances, not at the same time.

“This top-hat man is apparently pretty friendly, but likes to creep people out in one specific room. I believe it’s 208,” Klees said. “He just sits there very peacefully. There’s another woman who sits in a chair very peacefully.”

Klees said it’s not clear who the Gilmore ghosts were. They’re in good company, though, with all the other ghosts haunting Alaska’s First City.