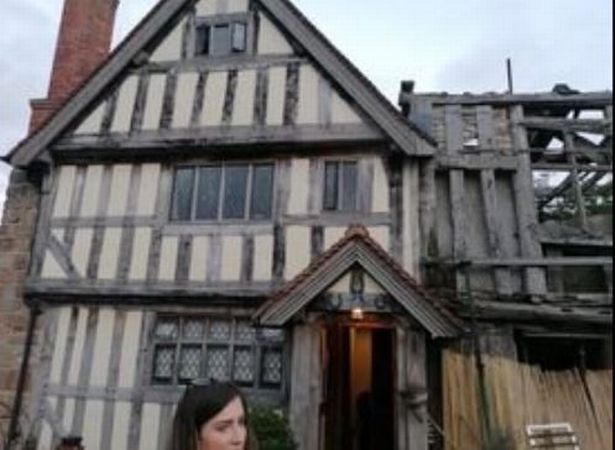 A ghostly image has been accidentally snapped on camera during a tour of a ‘haunted’ Burton home. Burton Ghost Walks embarked on a tour of Sinai House, off Shobnall Road, when one of their participants accidently snapped something spooky in the doorway.

Described as a ‘black mass’, ghost experts are still at a loss to confirm what it might be, but are hoping to discover more at their next event at the house. Chris Campbell, of Burton Ghost Walks, said: “I was doing a ghost tour and one of the audience took two pictures of the doorway within a couple of seconds of each other.

“The first had nothing on it and the second had the shadow. The photos where sent to me after the tour.

“Paranormally, a dark figure is a build-up of the energy of a ghost, so the jury’s out. It could be anything from a knight templar to a monk.

Sinai has many ghosts. It’s said to have the resting place of the Holy Grail under the house and has connections with the real Peaky Blinders.”

Sinai House is said to be the most haunted house in the town, with people previously saying they have been pushed and pulled and had their hair stroked when nobody was there. Well known for being the site of ghostly activity among paranormal fans, visitors to 15th century Grade II listed property have reported a phantom horse-drawn coach, a hanged witch and a hooded monk who appears at the foot of a bed.

Sir Henry Paget, who was Wellington’s second in command at the Battle of Waterloo, is also said to still roam the grounds, as well as a “grey lady” spotted on the bridge over the moat, who is said to be looking for her lost love. Famously, Sinai House is thought by some to be the site of the Holy Grail it is claimed Jesus Christ drank from at the last supper.

It has eluded historians for years and could be hiding in the dark, dank tunnels beneath a historic house, it has been claimed. Burton Ghost Walks also says there are 168 ghosts there.

The “singing girl” (caught on EVP), and a ghostly army of cavalier soldiers who terrified a whole audience of visitors with their appearance are said to be among them. In recent history, it was the location of modern witches who where said to worship around the well.

The next Burton Ghost Walks at Sinai House takes place from 7pm to 8pm on Saturday, October 29. Tickets, costing £20 per person, can be booked via the group’s website.

More than 10,000 jobs on offer at Waitrose and John Lewis as Xmas prep begins