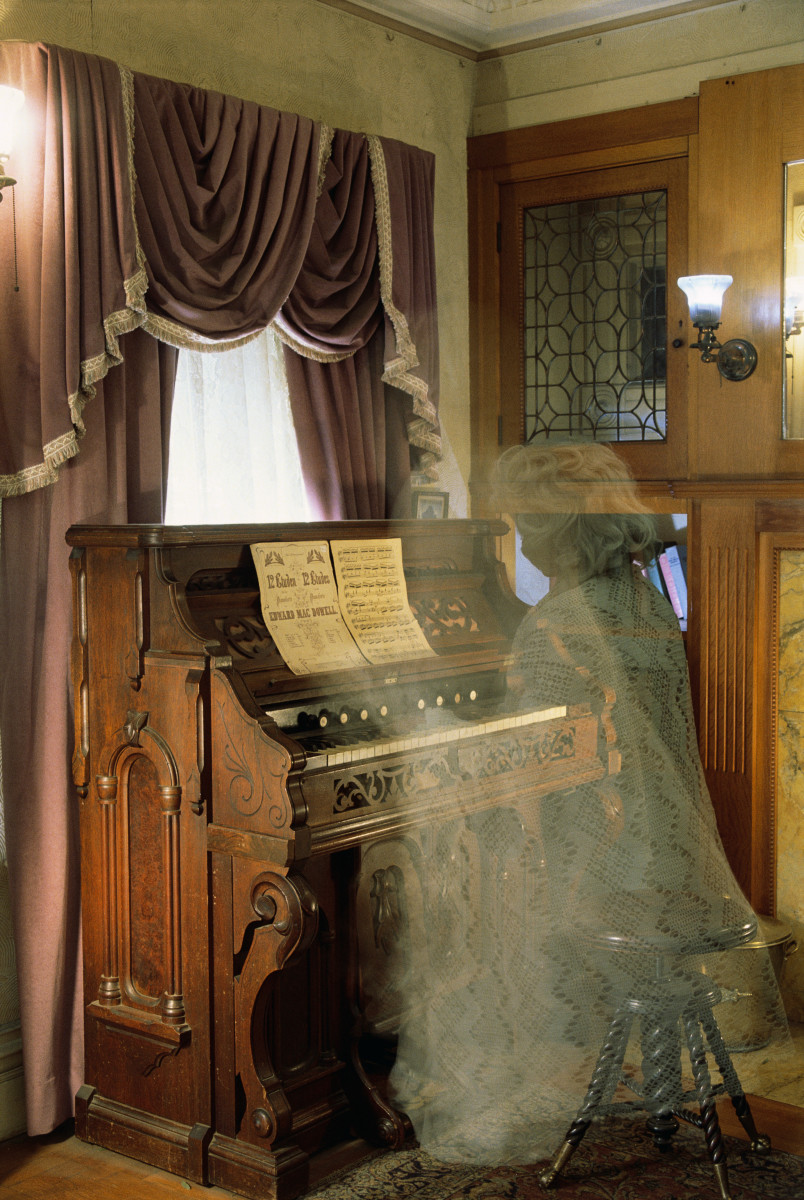 Since ancient times, ghost stories—tales of spirits who return from the dead to haunt the places they left behind—have figured prominently in the folklore of many cultures around the world. A rich subset of these tales involve historical figures ranging from queens and politicians to writers and gangsters, many of whom died early, violent or mysterious deaths.

What Is a Ghost?

The concept of a ghost, also known as a specter, is based on the ancient idea that a person’s spirit exists separately from his or her body, and may continue to exist after that person dies. Because of this idea, many societies began to use funeral rituals as a way of ensuring that the dead person’s spirit would not return to “haunt” the living.

Did you know? The notorious mobster Al Capone has reportedly appeared to disrespectful visitors at his funeral plot in an Illinois cemetery. Spectral banjo music has supposedly been heard coming from inside Capone’s old cell at Alcatraz, where he was one of the first inmates.

Places that are haunted are usually believed to be associated with some occurrence or emotion in the ghost’s past; they are often a former home or the place where he or she died. Aside from actual ghostly apparitions, traditional signs of haunting range from strange noises, lights, odors or breezes to the displacement of objects, bells that ring spontaneously or musical instruments that seem to play on their own.

In the first century A.D., the great Roman author and statesman Pliny the Younger recorded one of the first notable ghost stories in his letters, which became famous for their vivid account of life during the heyday of the Roman Empire. Pliny reported that the specter of an old man with a long beard, rattling chains, was haunting his house in Athens. The Greek writer Lucian and Pliny’s fellow Roman Plautus also wrote memorable ghost stories.

Centuries later, in 856 A.D., the first poltergeist–a ghost that causes physical disturbances such as loud noises or objects falling or being thrown around–was reported at a farmhouse in Germany. The poltergeist tormented the family living there by throwing stones and starting fires, among other things.

One of the most frequently reported ghost sightings in England dates back to the 16th century. Anne Boleyn, the second wife of King Henry VIII and mother of Queen Elizabeth I, was executed at the Tower of London in May 1536 after being accused of witchcraft, treason, incest and adultery. Sightings of Boleyn’s ghost have been reported at the tower as well as in various other locations, including her childhood home, Hever Castle, in Kent.

America’s own rich tradition of historical ghosts begins with one of its most illustrious founding fathers: Benjamin Franklin. Beginning in the late 19th century, Franklin’s ghost was seen near the library of the American Philosophical Society in Philadelphia, Pennsylvania; some reports held that the statue of Franklin in front of the society comes to life and dances in the streets.

Though many ghost sightings have been reported at the White House in Washington, D.C., over the years, perhaps no political figure has made so frequent an appearance in the afterlife as Abraham Lincoln, the nation’s 16th president, who was killed by an assassin’s bullet in April 1865. Lincoln, formerly a lawyer and congresseman from Illinois, is said to have been seen wandering near the old Springfield capitol building, as well as his nearby law offices. At the White House, everyone from first ladies to queens to prime ministers have reported seeing the ghost or feeling the presence of Honest Abe–particularly during the administration of Franklin D. Roosevelt, another president who guided the country through a time of great upheaval and war.

Some locations simply seem to lend themselves to hauntings, perhaps due to the dramatic or grisly events that occurred there in the past. Over the centuries, sightings of spectral armies have been reported on famous battlefields around the world, including important battle sites from the English Civil War in the 17th century, the bloody Civil War battlefield of Gettsyburg and the World War I sites of Gallipoli (near Turkey) and the Somme (northern France).

Another particularly active center for paranormal activity is the HMS Queen Mary, a cruise ship built in 1936 for the Cunard-White Star Line. After serving in the British Royal Navy in World War II, the 81,000-ton ship retired in Long Beach, California in 1967; the plan was to turn it into a floating luxury hotel and resort. Since then, the Queen Mary has become notorious for its spectral presences, with more than 50 ghosts reported over the years. The ship’s last chief engineer, John Smith, reported hearing unexplained sounds and voices from the area near the ship’s bow, in almost the same location as a doomed British aircraft cruiser, the Coracoa, had pierced a hole when it sank after an accidental wartime crash that killed more than 300 sailors aboard. Smith also claimed to have encountered the ghost of Winston Churchill–or at least his spectral cigar smoke–n the prime minister’s old stateroom aboard the ship. Many visitors to the Queen Mary have reported seeing a phantom crewmember in blue overalls walking the decks. Around the ship’s swimming pool, reports have been made of mysterious splashes and ghostly women in old fashioned bathing suits or dresses, along with trails of wet footsteps appearing long after the pool had been drained.

Among major cities, New York is especially rich with ghost stories. The spirit of Peter Stuyvesant, the city’s last Dutch colonial governor, has been seen stomping around the East Village on his wooden leg since shortly after his death in 1672. The author Mark Twain is believed to haunt the stairwell of his onetime Village apartment building, while the ghost of poet Dylan Thomas is said to sometimes occupy his usual corner table at the West Village’s White Horse Tavern, where he drank a fatal 18 shots of scotch in 1953. Perhaps the most famous New York ghost is that of Aaron Burr, who served as vice president under Thomas Jefferson but is best known for killing Alexander Hamilton in a duel in 1804. Burr’s ghost is said to roam the streets of his old neighborhood (also the West Village). Burr’s spectral activity is focused particularly on one restaurant, One if By Land, Two if By Sea, which is located in a Barrow Street building that was once Burr’s carriage house.