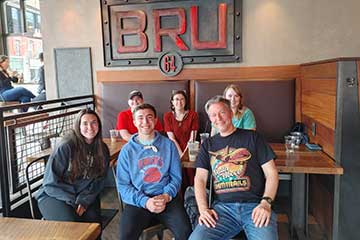 Craig Foster doesn’t mean to step on Bigfoot’s mythical toes but, in a world of instant information and dangerous data, he thinks it’s important to develop skills that allow you to determine fact from fiction.

That’s why Foster, chair of SUNY Cortland’s Psychology Department, recently critiqued Bigfoot believers in an editorial on Syracuse.com — and it’s why his students have helped write columns for a national skeptic magazine. It’s part of the Psychology of Pseudoscience, a class he taught last spring semester and hopes to make a permanent part of the curriculum..

“I knew I wanted to teach this class when I was hired by SUNY Cortland to chair the Psychology Department in 2020,” Foster said. “I am grateful that my department and my dean (R. Bruce Mattingly, dean of arts and sciences) have been supportive. The goal of the class is to teach students to identify common tactics used to promote pseudoscience.”

Foster noted that social psychology examines how situations influence human thought, emotion and behavior. Likewise, social influence can cause reasonable, intelligent people to believe in pseudoscience — which is why he feels it is important for students to improve their critical thinking and avoid falling for current or future falsehoods.

And Bigfoot? Foster says the Syracuse.com editorial introduced ideas of critical thinking to readers by discussing a subject with less emotional baggage than other, more polarizing, issues.

“The editorial was an opportunity to remind readers that sensational claims are ubiquitous, and people should stay in the habit of considering these claims skeptically. The human habits that allow these claims to persist can cause serious harm. We will enhance well-being broadly if we can teach people how to be more effective in processing information.”

As a class assignment, Foster’s 15 students helped write an ongoing column for the Skeptical Inquirer, a bimonthly national magazine in circulation since 1976. It focuses on challenging unproven concepts that are accepted as fact by many. Foster wrote the first of the columns, to be published in the January/February 2023 issue, and the class’s contributions will be seen in subsequent editions.

Another goal of the class according to Foster, is to directly address current forms of pseudoscience.

“It seems to me that educated citizens eager to make the world a better place should understand these issues,” Foster said. “One benefit of studying pseudoscience is that it is fundamentally apolitical. If a claim can be construed as pseudoscientific, we can study it, regardless of whether the claim is favored by the political left or the political right.”

After reviewing some general psychological processes, students studied the flat Earth model. Foster said that’s a good starting point because most people believe the Earth is round. They went on to cover topics that ranged from creationism, climate change denial and the anti-vaccination movement to cryptozoology (the study of legendary animals), psychic abilities, conversion therapy, astrology and ghosts.

Over time, Foster hopes the critical thinking encouraged in class helps students tackle the all-too real problems the world has to reckon with.

“In my opinion, the biggest area for alarm is climate change denial,” Foster said. “Societies respond slowly to vague threats that develop incrementally. It is too easy for people to push the problem onto future generations because we don’t want to fully address the problem now. It’s really unfortunate. Anti-vaccination and election fraud are also obvious areas of concern.”

Of course, there are some areas of pseudoscience Foster is willing to let slide, for obvious reasons.

“I could also include dragons as a fascinating form of cryptozoology, but dragons are most definitely real,” he said. “I see amazing Red Dragons every time I go to work.”

Top image: A frame from the 1967 Patterson-Gimlin film, which purports to show live footage of Bigfoot.