Home UFO News 90,000 US UFO sightings gathered into one map 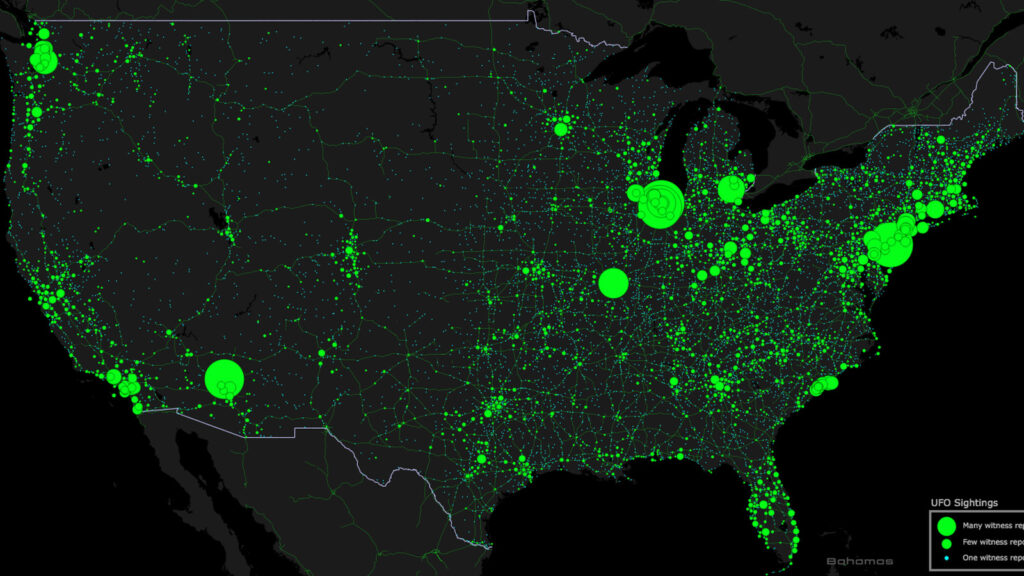 For decades now, people around the world have been fascinated by the mysterious and unsettling phenomenon of UFO sightings. While some believe that these objects are alien visitors, others think that they might be man-made or natural phenomena. Regardless of the reason for these sightings, it has become an annual curiosity for most people.

Now, a new map compiled by the National UFO Reporting Center (NUFORC) has brought this fascination to a whole new level by aggregating over 90,000 reports of UFO sightings dating back to 1905. The map, which can be found on the NUFORC website, displays each reported UFO as a circle, with the size of the circle representing the number of reports received for that particular sighting. As you might expect, the map is filled with clusters of UFO sightings, particularly in more populated areas.

One of the most interesting features of the map is its ability to track the evolution of UFO sightings over time. For instance, the chart below shows that while these sightings were rare during the 20th century, they became more common during the latter half of the decade. This continued into the 21st. More people reported sightings during the past few years.

Unfortunately, some of the reports on the map are not labeled as genuine sightings. These can be the result of hoaxes or misidentifications. However, the majority of these sightings are believed to be genuine.

Although it’s hard to predict exactly what the map will reveal about the future of UFO sightings, it can provide some interesting insight into the current state of affairs. For one, it shows that these objects are more common than people realize. Also, it suggests that these phenomena has been going on for a long time.

It should also be noted that the map doesn’t include every reported sighting of an unidentified flying object. This could be because these objects were either not credible or weren’t included due to their lack of credibility.

The map serves as a record of the continued fascination with this strange and unsettling phenomenon, as well as the possibility of alien life. Regardless of your beliefs about aliens, it’s still hard to deny that these objects continue to draw people’s attention. So, if you see something strange in the sky, you can also report it to us using this form.

UFO sightings over military bases in the United States have long been a source of fascination and speculation. According to data from the National UFO Reporting Center, there have been numerous reports of UFO sightings in the vicinity of military bases across the country. Some of these sightings have been accompanied by strange and unexplained phenomena, such as unexplained lights or strange aircraft behavior. While it is difficult to say for certain what these sightings represent, they have fueled speculation about the possibility of extraterrestrial activity or advanced military technology being tested. Regardless of the cause, these UFO sightings over military bases in the United States continue to pique the interest of UFO enthusiasts and the general public alike.

In the image below I’ve combined two images: