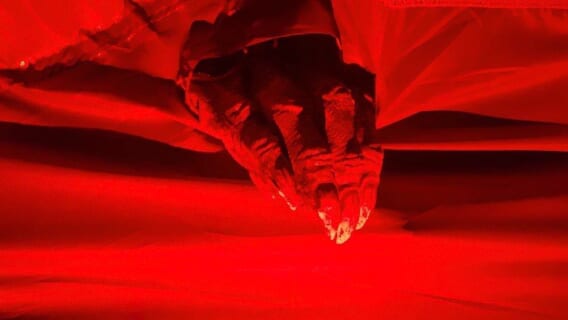 When’s the last time I’ve talked about Bigfoot? There’s no way I haven’t mentioned that hairy bastard at least once, right? Let me see… ah, right here! Alright, good, I was worried there for a moment. It sure has been awhile, though. Luckily, I’ve just been sent a film that’ll fix that right up! But first, a little crypto-lesson… as in “cryptozoology”. Not the other thing. You know what I’m talking about.

Bigfoot, Sasquatch, Yeti, Harry: all names given to very similar bi-pedal, large-footed beast men that roam through remote wildernesses around the world. Whether they’re all the same species or if they just share tonsurephobia is hotly debated. We all have our own theories on the matter. Like my theory that — and hear me out — they all have a secret hiding spot they hang out at called “The Imagination”. I know, wild idea, but I think it holds some weight.

There’s one I didn’t mention, however, that just so happens to be the star of our film today — Tahoe Joe! I’d love to tell you more about Mr. Joe before we carry on with the film… I’d love to, but I can’t find anything about him. I’ll admit, I was on the verge of thinking Tahoe Joe might not be an actual myth, which is a testament to how widespread the whole Bigfoot idea is. I didn’t even think twice about it being a local legend somewhere since it seems every state that ends with a letter has a Bigfoot. Ohio’s Grassman, Arkansas’s Fouke Monster, Florida’s Skunk Ape, Virginia’s Wood Booger, Illinois’s Big Muddy Monster… wait, Wood Booger? Huh. Alright.

Point is, the myth of Tahoe Joe being passed around the Lake Tahoe area seemed as real as the rest of them — and according to director Dillon Brown, it is!

“It’s actually the strangest damn thing… The legend is of a Tahoe Joe, but it’s originally about a mountain man who aided soldiers during a war over here in the 1800s. And then it shifted to people calling Tahoe Joe a Bigfoot… And I have no idea why that happened. So we went with it and made it our own.”

What is a Bigfoot other than a pro-tier “mountain man”? It all checks out to me!

“There was a ton of construction that took place around Lake Tahoe in the 80s, 90s, and even still, with millionaires moving in and erecting mansions deep into the woods. A lot of construction workers claim they’ve seen something — a Bigfoot some have said — while working early mornings or late at night. So I’m sure that’s where it started and the locals probably just adopted the name based off the old mountain man legend.”

Well, there you go. Tahoe Joe is a mountain man who helped soldiers in the 19th century, turned into a Bigfoot, and now waves hello to construction workers occasionally… and here I was doubting his existence. The egg’s sure on my face!

“In 2022, filmmaker Dillon Brown set out with Green Beret and wilderness survival expert, Michael Rock, to document an attempt to find a missing person. What they found instead was a horror thought to be a myth.“

Before we explore this flick, I think it’s important to understand its production.

“Mike and I literally went at it with no script and just started filming. We had about $800 to play with and I made a Bigfoot suit in my garage by hand… Mike bought some camping stuff we could trash and some lights… then we just contacted friends, asked them if they wanted to come play Bigfoot in the woods with us, and the film was made! I was literally doing live edits on the footage as we were filming it just to make sure we could keep the story going forward and keep the continuity since we had no script. It was a wild experience and an experiment in filmmaking. Some of it was done in secret while The Flock was still going on and we just kept it a secret as to what we were up to.”

Oh yeah, this is as good a place as any to mention that Brown also directed the low-budget creature feature The Flock, which I raved about earlier this year.

With that context, I can confidently say that this film looks GREAT for only having an $800 budget. That’s all they had to make this, and they managed to present the film in a way that suggests a much higher production quality. And they did it while producing another film altogether! Most people messing around in the woods just end up with bug bites. So this is more than a little impressive.

Now, the film’s story isn’t anything we haven’t heard before. Someone goes looking for Bigfoot, ends up missing, then valiant adventurers search for clues as to why they disappeared. And it’s all shown through the lens of found footage, which might have been a personal negative a year ago, but a lot has changed since then. For what it is, it’s not too shabby. There are some contrivances that occur just for story’s sake, but given that they were going about this without a script, I’m a bit more forgiving about it.

Dillon Brown and Michael Rock star in the film, playing themselves. They act believable enough as two filmmakers wanting to investigate a camper’s disappearance and maybe also snag a snapshot of a Bigfoot. Sounds like roles they were born to play! In all seriousness, they’re more convincing than most Bigfoot movie protagonists due to them packing an ASSAULT RIFLE for their excursion! Is it legal to subject a Bigfoot to thirty doses of hot lead? I have no idea, but that sounds like an “ask later” question when a Bigfoot is hauling ass at you.

The rest of the cast gets the job done, adding exposition and getting everyone on track with the plot. You know, the usual side character stuff.

One of the main hurdles with found footage is making it all seem real. Failing that tends to cause the magic to falter unless you’re poking fun at the genre — ala Deadstream. Luckily, this flick seems realistic enough and there weren’t too many times I lost immersion.

Then there’s Tahoe Joe, the fur-covered tormentor of our two heroes as the film ramps up near the end. We don’t see much of him—par the course for these flicks—but what is shown looks stellar! That’s not even considering how the whole get-up was put together in Brown’s garage. It’s by any measure a good Bigfoot suit, elevating the whole package by at least a letter grade. I don’t know what kind of magic Brown dabbles in. But after seeing this and The Flock, I’m excited to see what he creates next!

Overall, this is far from the worst Bigfoot flick I’ve seen this year. On the contrary, it’s one of the best! As I said many times before — when it comes to indie horror, heart goes a long way with me. Having no budget, no script, and only a few friends to help make a flick about a giant hairy brute? Well, that’s just passionate enough for me to admire. Brown has proven not just once, but twice that he can make entertaining films using only funds he was able to scrounge up. With that in mind, I can’t wait to see what he can do with a full budget.