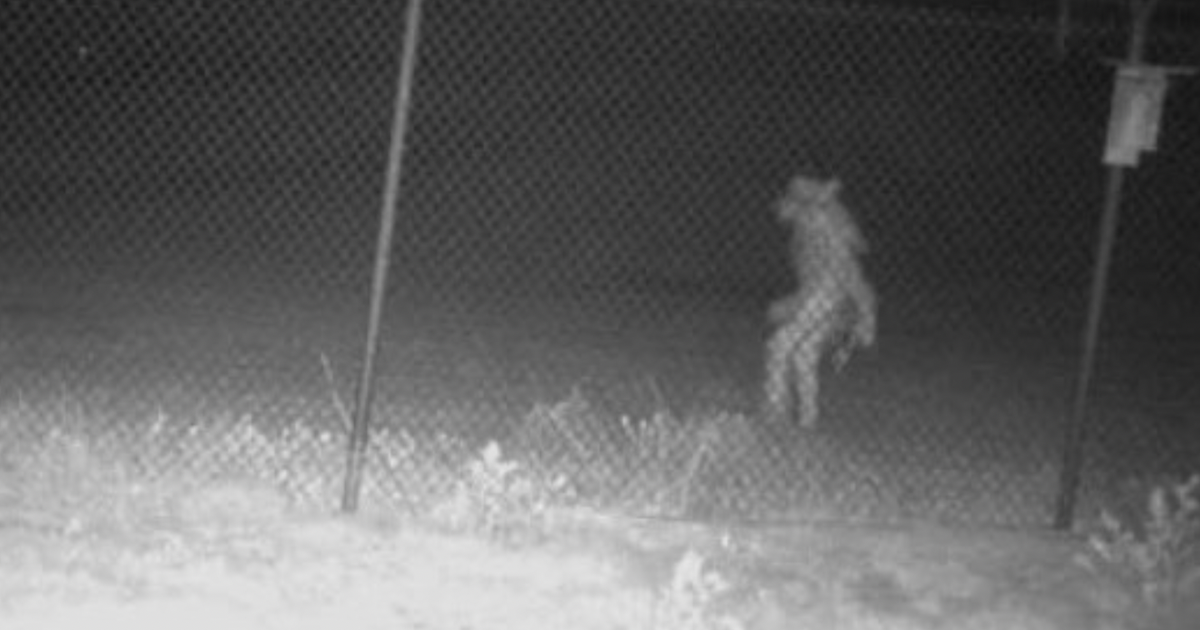 A bizarre image captured on camera outside a Texas zoo has wildlife experts and local officials baffled by the appearance of an upright animal strolling along in the middle of the night. The photo has led to speculation that it could be the infamous chupacabra, the mythical vampire beast that hunts for the blood of livestock, or some other strange cryptid.

Nobody seems to have a better suggestion, at this point.

The city of Amarillo, in north Texas, shared the photo on Facebook Wednesday. The still image came from a game camera stationed outside the Amarillo Zoo around 1:25 a.m. on May 21.

The Amarillo Zoo captured a strange image outside the zoo in the dark and early morning hours of May 21 (around 1:25…

Posted by City of Amarillo, Texas on Wednesday, June 8, 2022

The photo was taken in a park area just outside the zoo that doesn’t get much use, Amarillo parks and recreation director Michael Kashuba told CBS News. The unusual figure, described by the city as an “Unidentified Amarillo Object,” was spotted by zoo members who were reviewing recent footage and stills from game cameras.

Kashuba said the game camera that captured the image of the strange entity only produces stills, not video footage.

The eerie picture has led to a lot of guessing online, including jokes about the creature being Sonic the Hedgehog or Rocket Raccoon. Maybe just a weird person in costume doing something weird. Perhaps, could it be … Sen. Ted Cruz?!

Other sleuths have called the creature a skin-walker, a harmful witch that can disguise itself as an animal, based on legends from Navajo culture.

Cryptozoology is a pseudoscience that seeks to track down the origins of countless popular and more obscure animals that have entered folklore, from the Loch Ness Monster to Sasquatch and the chupacabra.

A more grounded approach to solving the mystery in Amarillo would consider the possibility of an animal walking on its hind legs. The creature’s head appears to have a dog-like form, but the apparent gait and bend at the knees are straight from Uncanny Valley.

In New Jersey, there was the famed Pedals the Bear, who ambled around impressively on his hind legs due to injuries to his front limbs. Videos of Pedals making his way around Oak Ridge and other North Jersey communities became viral around the middle of the 2010’s, but Pedals was tragically shot and killed by a hunter in 2016.

It’s hard to put it past a human to dress up in a costume and walk by a game camera with the goal of creating some sort of online stir — in which case, mission accomplished.

But if it is a bi-pedal animal stalking Amarillo, maybe it’s the runaway Pennsylvania coyote who busted out of a wildlife rescue shelter earlier this year. He may have reached his final form and traveled to Texas.

Anyway, good luck to the children who have to sleep in that city.