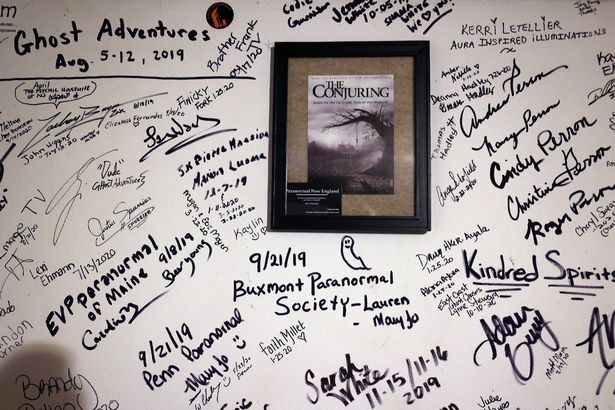 A ghost hunter says he almost vomited when he visited the haunted house that inspired The Conjuring movie.

YouTubers Sam and Colby, who are best known for exploring haunted buildings, were appearing on the Joe Rogan Experience where they discussed their creepy encounter with the property.

The paranormal pair had visited the former home of the Perron family in Harrisville, Rhode Island, which was once claimed by famous demonologists, Ed and Lorraine Warren, to have been haunted by a witch who had lived there in the early 19th century.

READ MORE: ‘I’m proud to be a hillbilly – I have four fingers, grow pot and make 70% moonshine’

Sam said: “That’s the thing with some of these places. It’s not just immediately that’s there’s spiritual energy but it’s heavy or you feel off when go into these places.”

“I almost threw up,” added Colby.

“What’s interesting about the paranormal is that it affects people differently.

“Some people see stuff, some people claim they’re mediums and can communicate more.

“I have more of an empathic thing. I just feel worse whenever there’s something around.

“When we first walked into the Conjuring house, there was a point where I thought I was going to throw up and I was looking for exits.”

To stay up to date with all the latest news, make sure you sign up to one of our newsletters here .

The Conjuring centres on the alleged real-life exploits of Ed and Lorraine Warren, a married couple who investigated paranormal events.

The Warrens come to the assistance of the Perron family, who experienced increasingly disturbing events in their newly occupied farmhouse in Rhode Island in 1971.

“What’s the real story behind The Conjuring House?” asked Rogan

“The most famous it’s built on the same grounds the King Philip’s war was fought on, right at the beginning of the United States,” said Sam.

“So the main people that haunt there are actually seven dead soldiers, that this little girl always kept seeing in the walls.

“And it started manifesting more to the entire family.

Sam continued: “This family called the Perron family bought the place and for 10 years they said they would see these figures, these soldiers walking around.

“Their beds would shake, they would get scratches, and it kept getting worse over this 10 years.

“The crazy part is it got to become famous because of the final day that changed it all.

“They wanted to do an exorcism on the house because Caroline Perron was getting really bad.

He continued: “So she brought in these demonologists, Ed and Lorraine Warren, and they were doing this exorcism and her claim is she (Caroline) was thrown across a room and into a wall where she had injuries.

“The Perron family actually wrote a book about that and they say the Conjuring movies don’t do it justice.

“They say in real life, experiencing it, and all the trauma they went through, it was 10 times worse.”

All the news, entertainment, sport and fun stuff you love about the Daily Star, brought to you by our American team.