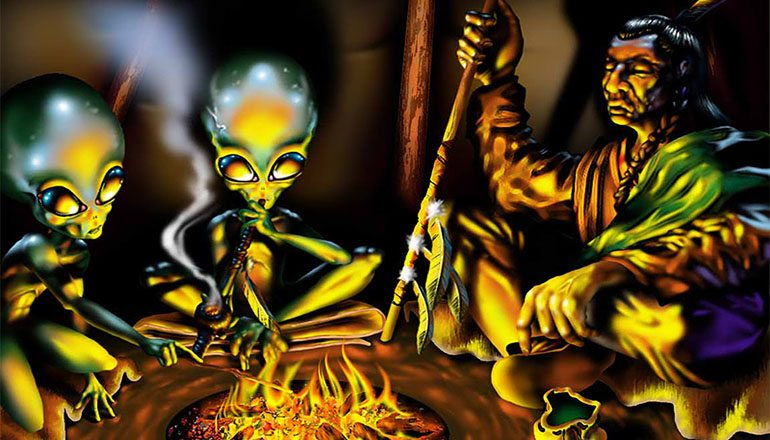 Before the Europeans found the Americas, a variety of cultures inhabited the land. Unfortunately, the near-annihilation of Native Americans led to the disappearance of ancient knowledge that we might never recover.

On the positive note, survivors managed to pass down stories about the “Star People,” a term that refers to groups of various beings from the sky who shared a connection with humans who were worthy of their teachings.

According to the collection of stories, the ancient world had interactions with a multitude of advanced aliens. Several cultures separated by thousands of years had made mentions of flying objects and advanced technology. These stories are prevalent within the mythos of the Native American tribes.

Richard Wagamese of the Wabaseemoong First People writes about Star People who came to Earth many generations ago, brought spiritual teachings, stories, and maps of the cosmos for free. Richard describes them as kind and loving, and when they left, people say there was a loneliness like no other.

The peaceful Hopi people believe their ancestors originated from the Pleiades, and the Pleiadian aliens’ general demeanor is reflected in their lifestyle.

Dakota legends refer to similar star cluster but called it Tiyami as being the primal home of their ancestors.

Meanwhile, the Cree believed their ancestors arrived from the stars in the form of spirit, only to become humans on Earth.

Lakota people’s native legends talk about mysterious celestial beings that manifested as spheres of light and would usually choose certain children to follow them through space and time.

All Native American tribes see themselves as the original caretakers of Mother Earth and lament the path of destruction we’re on. Several tribal figures think that this is the primary reason behind the weakening of the bond between the Star People and humanity.