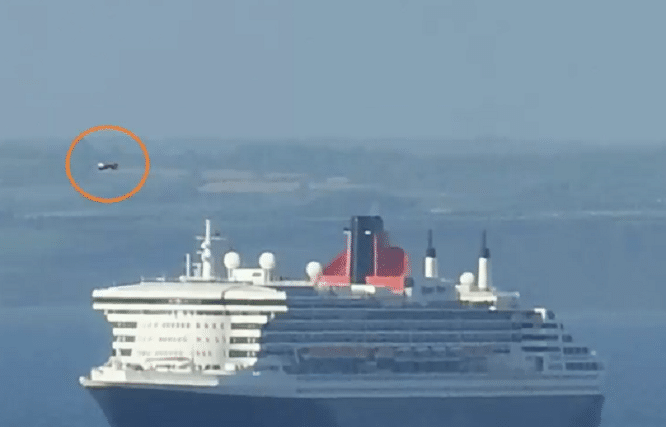 For many, 2020 is the most unusual year in living memory, and it seems that we’ve seen and been through a lot of strange things. It’s no wonder for many to wonder what the year will bring next.

What about space aliens coming to Devon for their end of summer vacations? In photos caught by the chief investigator for World UFO Photos, John Mooner, a photography mission to catch four cruise ships in Hopes, Nose, Torquay resulted in spotting a UFO.

The UFO was spotted above the Queen Mary 2 cruise ship. It was too big to be a drone, Mr Mooner insists. He further said that it was metallic and reflected from one side.

Narrating his unusual find, Mr Mooner said he had gone to Hopes Nose to get pictures of the four cruise ships that were anchored offshore. He had been taking photos of the ships all week from different locations around the coast, and he had captured some fantastic shots of them.

He had also caught several anomalous objects close to the ships. One of these UFOs had been flown directly over the top of the cruise ship that he had managed to photograph. He said he had a good vantage point of the vessel from where he was standing at Hope’s Nose. He had just started to take pictures of two of the ships with his Nikon P900 camera when he saw a strange object close to the Queen Mary 2 cruise ship just like before.

UFO or drone in the sea above Torquay? (Credit: John Mooner/worldufophotos.org) pic.twitter.com/aRQhLzfqzo

Mr Mooner described the object to be metallic, and the sun was reflecting its right side. He said he saw the object flew down towards the ship and then stopped and hovered for several seconds before it disappeared without a trace.

The UFO stumped Mr Mooner as it was far too large to be a drone and no sound coming from it at all.