Home Paranormal News The Cage in St Osyth: We spent a night in Essex’s most... 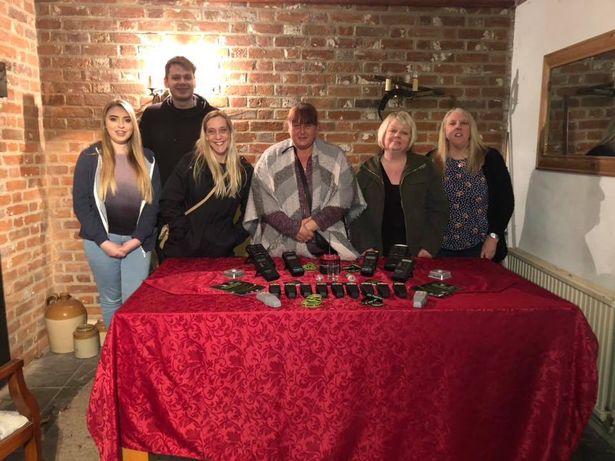 Last year we reviewed a ghost hunting night in The Cage in St Osyth, before it was sold to a new owner. Here’s exactly what happened:

Walking into a quaint cottage on the outskirts of Clacton, dubbed one of the most haunted houses in Britain, one immediate thought crossed my mind; ‘What am I doing?’

I’m not sure whether it was the overwhelming fear of the unknown or the possibility that I could see something I’ve only ever seen depicted in horror movies when I agreed to spend the night at the supposed haunted house in St Osyth , nicknamed The Cage.

The Cage was used as a medieval jail which held convicted witch Ursula Kemp, who was held here before being hanged in 1582.

It has since been the subject of several television paranormal investigations after its previous owner Vanessa Mitchell fled the house claiming she was terrorised by ghosts, and is meant to be Essex’s most haunted property.

She claimed to have been plagued by ghostly figures and a satanic goat describing how she was once pushed over while pregnant by an unknown force.

With so many supernatural tales, I was keen to see just how haunted the Cage actually was and jumped at the chance to take part in an overnight stay ran by Bump In The Night Paranormal UK.

This is what I thought

We arrived at The Cage just before 7.00pm on Sunday, October 28, ready for a seven-hour stay along with four other guests, apprehensive but excited for the night ahead.

As we were the first to arrive, we chatted to the two organisers who described some of the places and things they had seen during their time leading ghost hunts.

One of the first things I noticed when I entered the property was just how cold it was and the strange layout of the kitchen and dining room.

Exposed brick, heavy wooden doors and an ominous broomstick which hung above the doorway all added to the creepy atmosphere and gave a nod to its medieval past.

Soon after, four more ghost hunters joined us and our spooky night of trying to contact the night had begun.

The meters have lights going from green to red indicating the various levels that they picked up on.

When we turned the devices on, all but one immediately flicked to orange which the investigators admitted they “had never seen happen before”, which definitely spooked a lot of people.

A Q&A with some ghosts

As we took it in turns to call out to the spirits of the Cage, we asked them to touch us, affect various lights we had littered across the room or bang on the walls- all to no avail.

In a bid to get some kind of activity, the investigators brought out a spirit box which uses radio frequencies to allow spirits to use it to speak through.

However, again there was little activity and at this point my fear began to subside and my confidence grew as we gathered round to form an energy circle.

We were instructed to rub our hands together to help build energy as we joined hands and formed a circle which the spirits were supposed to use and help them reach out to us.

Various questions were thrown around the circle like; ‘Did you die here?’ and ‘Were you convicted of being a witch?’

But none of us heard any inkling of a reply in the form of noises, lights or other indication- much to the disappointment of the group.

Our group then moved to the dining room and sat on a table above the ‘pit’ which measures around six foot by four foot and is where, it is thought, prisoners including convicted witches were kept before their death.

The original plan had been to allow all of the group access to the pit , however it was nailed in place and our team were unable to get inside.

With this thought in mind, I anxiously sat at the table where the group carried out glass divination where everyone would put their fingers on the glass and spirits would supposedly move the glass left and right for yes and no.

The investigators told us how the owner Vanessa banned the use of ouija boards for fears it may further agitate the spirits trapped within.

At this point, the investigators themselves admitted it was beginning to look like a “quiet night” but still with an open mind we made our way upstairs where the activity was said to be most reported in the bathroom and the child’s bedroom.

Things began to get a little more interesting when we were left alone in the child’s bedroom.

Our EMF meters in hand, we made our way into the room which immediately felt a little more insidious.

There was a single armchair in the corner which a lot of people said creeped them out and discarded toys scattered across the floor added to the tense atmosphere.

We sat in the middle of the room, one eye on the chair and the other on the meter, and began calling out to the spirits.

As the lights went from green to amber, we were hopeful of some activity and asked the supposed spirit to use amber for yes and green for no.

By asking questions and using the machines we established that we were talking to an old man who had died in the house, which although we were both still skeptical was pretty creepy.

Knocks on the wall

We then decided to try the bathroom out, taking our devices and courage with us, and once again began calling out asking for the spirits manipulate our devices as we knocked on the wall.

To our horror, and surprise, we heard a loud knock in reply echoing through the house on the opposite side of the wall in the bathroom.

Clearly taken aback by the noise, the investigators called out asking if that was us knocking.

We shouted back that it wasn’t and knocked on the wall again before hearing another loud knock in reply.

At this point we were both terrified and I immediately felt sick with fear reaching for the door handle to run out of the house and never return.

However just as we were about to get up and run for our lives, a small voice said: ‘I’m outside.’

We poked our head out of the door to see a number of horrified-looking faces staring back at us.

To our relief, it turned out to be a neighbour knocking on the back door directly below us, asking us to keep the noise down as her daughter’s bedroom lies directly next to the room we were in and could hear us speaking.

After the scare of our lives, we quietly moved onto the second room where we began calling out to the spirits.

We also carried out a human pendulum in the child’s bedroom which involves a group creating a circle around a person and using the energy in the circle, the spirit would move the person in the middle backwards and forwards for yes and no.

To finish our particularly quiet night, we were given the time to tour the house by ourselves before bidding The Cage and all its spirits goodbye.

Although it was a pretty quiet night and nothing that creepy really happened I would definitely recommend going.

The group we had was full of lively characters and we ended up having a really good night even if the ghosts and spirits didn’t want to join in on the fun.

The investigators admitted themselves it was a quiet night for them explaining they had got lots of other material when they had previously visited The Cage.

In one room, they played us an audio recording that they had previously took which clearly depicts a voice saying: ‘Do you want to take a picture’ and ‘Only joking,’ which in itself was quite creepy.

I think we just were a little bit unlucky with the lack and of activity and we were all a bit disappointed that we couldn’t gain access into the pit.

Overall it’s a really fun night with access to various equipment and ghost-calling methods and who knows, you might come face-to-face with a begrudged witch or satanic goat.