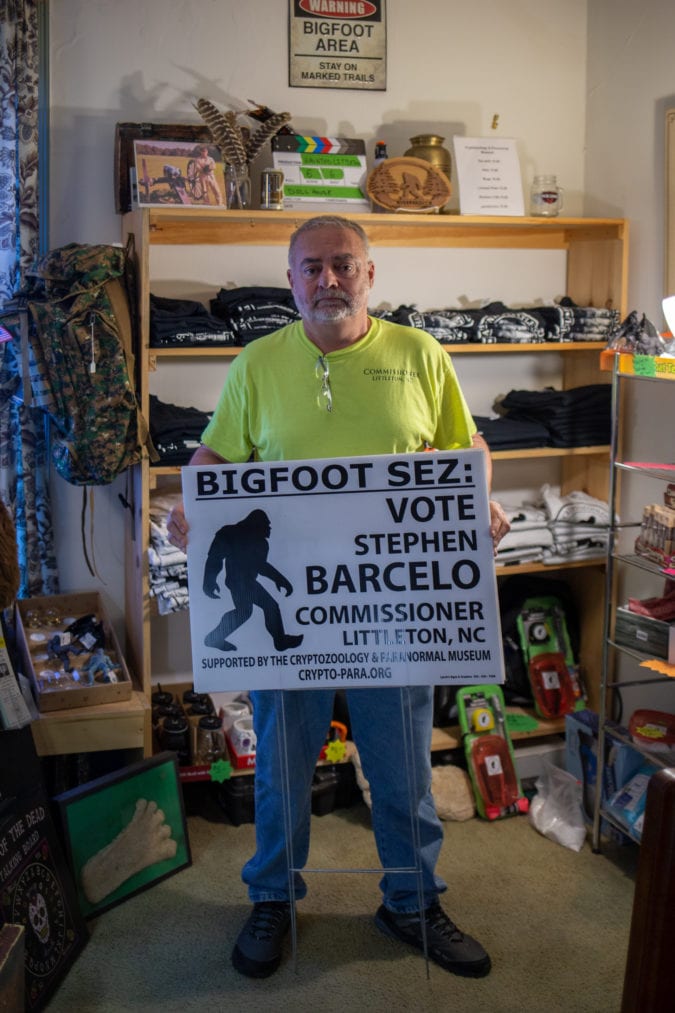 Ten minutes after I arrive at the Cryptozoology & Paranormal Museum, I’m ushered out the front door by the museum’s founder, Stephen Barcelo. I arrive an hour before the posted closing time, but it’s a Tuesday night and Barcelo has to leave early to attend a town hall meeting. He apologizes and talks a mile a minute, trying to give me as much information as he can before it’s time to go.

Two years ago, Barcelo reluctantly ran for the position of Commissioner of Littleton, a town located in North Carolina just south of the Virginia border (population less than 700). He campaigned with black-and-white yard signs featuring a silhouette of Bigfoot with the slogan “Bigfoot Sez: Vote Stephen Barcelo Commissioner Littleton, NC.” He won.

He changes out of a t-shirt that says “Commissioner, Littleton, NC,” into one that just says “Believe, Littleton, NC.” The Bigfoot silhouette makes an appearance again, this time standing in for the “i” in “Believe.” Eager to continue our conversation, Barcelo invites me along to the town hall meeting, and I accept.

Bigfoot in a little town

I get back in my car (parked near a sign marked “Bigfoot Parking”) and drive 10 minutes to the Littleton Town Hall, located on Main Street. There are 20 items on the agenda, including the acquisition of new bulletproof vests for the town’s three policemen and a proposal for securing donated Christmas decorations for Littleton’s tiny downtown. Barcelo’s daughter, Holly, needs the board to write a letter allowing the installation of broadband internet in the town. Her motion is granted.

A list of the month’s crimes is read: one kidnapping, one drug overdose, one shoplifting incident. I wasn’t here in January, 2016, but I wonder if that month’s report included “one Bigfoot sighting.” That’s when Tifanie Merrill, a neighbor of Barcelo’s, reported seeing a creature in the woods behind her house.

“It was very large and its hair was super long and it was running so fast,” Merrill told CBS North Carolina. “It wasn’t a bear and it wasn’t like a coyote. I’ve never seen anything like that whatsoever.”

Merrill was so spooked by what she saw that she pulled her daughter out of school and left Littleton for good, according to Barcelo. But for the Cryptozoology & Paranormal Museum, Bigfoot sightings are good for business. More than 180 TV channels shared the video of a visibly-shaken Merrill. The clip also features Barcelo—not as a concerned neighbor, but as a cryptozoology expert. The 2016 sighting “put us on the map,” he says.

It’s dark when I drive through downtown, but when I search for Littleton on an actual map, I realize I didn’t miss much. There’s a volunteer fire department, a Piggly Wiggly, a Lions Club, several churches, and at least two funeral homes. So Barcelo’s museum, which is located in the front rooms of his historic home and open seven days a week, stands out. “You step back 50 years in time here,” Barcelo says. “It’s a nutty place. The town has potential but we are the tourist attraction.”

The Barcelos bought their house in Littleton six years ago, but didn’t move in for a year. They hired contractors, and then strange things began to happen. “They were seeing things and their tools were moving,” Barcelo says. “They reported seeing shadow people, hearing voices, and guys started walking off the job.”

Raymond, one of the few men who stayed, kept finding black clay marbles in the house. He began to feel fatigued and complained of a metallic taste in his mouth. He died suddenly, but according to Barcelo (and several guests of the museum), Raymond never left. “For some reason he’s hanging around,” Barcelo says. “People get photos of a translucent figure. I showed a photo to Raymond’s widow and she said, ‘Yep, that’s my husband.’”

One room of the museum is dedicated entirely to the paranormal. In addition to Raymond’s black marbles, the collection includes several haunted dolls locked in cases, gravestone rubbings, an old wooden coffin, and shrunken heads.

“Some crazy, crazy stuff goes on in this house,” Barcelo says. But he’s not scared. “It’s more about getting the story. I hope the camera worked, I’m wondering, ‘Did I catch this?’ What you see or perceive is not always what you get on tape.”

From Long Island to Littleton

Barcelo was born in Long Island, New York. He’s had several different careers, most recently as a journalist for the New York Daily News. He covered a range of topics for the New York City tabloid, including several high profile crime cases. He once gave notorious gangster John Gotti a business card that included his home address, and he frequently interviewed serial killers.

On weekend father-daughter trips, Barcelo and Holly would go on ghost tours. They first developed an interest in the paranormal, and cryptozoology (the study of creatures whose existence is unproven) followed. “There are no Bigfoot sightings on Long Island,” Barcelo says. “We were lucky to see squirrels.”

When Barcelo’s boss at the Daily News heard of his new hobby, he got the greenlight to begin pursuing his passion professionally. He traveled to upstate New York to film a documentary about Bigfoot and to New Jersey, supposed home of the Jersey Devil. “I go from being the wacko who is trespassing to the guy who’s getting published,” Barcelo says.

When the Daily News started paring down its staff, Barcelo and his wife Maureen decided they were ready to move on. “I’m glad I did what I did—and I was good at what I did,” Barcelo says. They left New York in search of lower property taxes and higher temperatures; Littleton had both. “We started going south, doing the Yankee thing, looking for warmer weather,” Barcelo says. “And we ended up with a haunted house.”

Driving to the museum, I pass ornate, plantation-style mansions next to dilapidated trailers. Six years ago, the Barcelos fell in love with what they refer to as “one of the grander homes in town.” The three-story, black-and-white clapboard house, built in the 1850s, used to face Old Stagecoach Road; in 1895 it was spun 45 degrees and now faces Mosby Avenue.

“We know for sure it was a boarding house at one time and it’s rumored to have been a bordello,” Barcelo says. The museum and gift shop occupies two front rooms and spills into the home’s spacious entryway. There are five bedrooms on the second floor, an underground stream in the basement, and a hidden room on the second floor (accessed by a panel in the back of a walk-in closet).

There’s something out there

Barcelo loads me up with museum merchandise, including a Bigfoot cookie cutter, stickers, a coffee mug, a stone pendulum, buttons, a flashlight, plastic Bigfoot figurines, a Christmas ornament, and a t-shirt. One of the most popular items he sells is a complete “Bigfoot go bag,” which contains everything one needs to gather proper evidence: a plaster of paris compound, knee pads, plastic bags, a Sharpie marker, a tape measure, lights, string, a whistle, and a bottle of water.

It turns out that proving the existence of a notoriously shy and elusive creature is easy, at least in theory. Combine the water and the plaster of paris in a plastic bag, squeeze the mixture into a fresh footprint, and in 10 to 20 minutes you have a bonafide Bigfoot cast. The museum has several dozen on display, a few of which have been made by Barcelo himself (others are gifts or copies).

Encouraging people to come forward with their own sightings is a bit more difficult. “This is a small town, no one wants to be labeled as the nut who saw Bigfoot,” Barcelo says.

Holly says she has talked with hunters who say they’ve spent their entire lives in the woods and have never seen Bigfoot. “I think, ‘Well, I know two of your friends and they’ve come in here to give me stories.’ But I was sworn to secrecy so I’m not going to name names.”

Barcelo takes all sightings seriously, while still maintaining his New York skepticism. “I’m a journalist first,” he says. “If you work a story, it brings the nuts out of the woodwork. Even the Bigfoot sighting next door—we have people saying, ‘That was my son out there,’ but no one can give us facts. Everyone wants their few moments of fame and I’m used to that.”

Although he admits that he’s never seen Bigfoot, it’s true that being North Carolina’s go-to for cryptids has brought Barcelo himself more than a few moments of fame. He’s been interviewed by almost every major news outlet including the Travel Channel, MTV, and NPR.

Despite cryptozoology critics and general skepticism, Barcelo wants to believe.

“I think Bigfoot is a flesh and blood creature,” he says. “We have people that come in and think that they’re interdimensional but I think they’re some divergence of Gigantopithecus [an extinct species of giant apes]. Too many people have seen things. They’re seeing something here. There’s something out there.”

When the Barcelos moved to Littleton, locals showered them in Southern hospitality. Six years later, neighbors still wander into the museum unannounced, often with a cocktail in hand. During the town meeting someone mentions two local vendors, Andy’s Kettle Corn and Steve’s Snow Cones. I find out later that Andy is the Cryptozoology & Paranormal Museum’s tech guy. What about Steve? “Oh, we don’t have a connection to him—yet,” Holly says.

Holly says the family attended a neighborhood porch party and when her dad announced, “I’m going to tell them about all the ghosts that we have,” her mom replied, “Could you please not.” Barcelo adds: “Yeah, I get it. We’re already the crazy Yankees. We don’t need to be the crazy Yankees who see ghosts.” But instead of getting out “the pitchforks and crosses,” Holly says that several people chimed in, “Oh, you have a ghost too? Let me tell you about our ghost.”

Despite their thick New York accents, some of that Southern hospitality seems to be wearing off on the Barcelos. During the three-plus hours I spend in their home, they offer me wine, soda, and water. They inquire about my accommodations for the evening and Holly, who rents a huge Victorian house around the corner, says I’m welcome to stay with her any time.

I sit in one of their two antique church pews and Holly asks if I have any plans for the upcoming Friday the 13th as she hands me a tiny black, month-old kitten. They’re trying to find him a home because Holly is allergic, but the family has a soft spot for animals. They rescued a blue jay named Kevin and five dogs: Harley (who answers to Chunk), Lucy, Duke, Burt (Ernie ran away), and Medoc (named for the nearby state park rife with Bigfoot sightings).

Barcelo’s car is always packed with camping equipment and a Bigfoot go bag so he can respond to sightings quickly. He currently works full-time at the museum but would love to bring in some help so he can spend more time out on the road. Holly is trying to establish a historical society in town and Maureen dreams of purchasing a second haunted home nearby to use as a dedicated museum and bed and breakfast. “Then I could get my house back,” she says.

The Cryptozoology & Paranormal Museum is open Monday through Sunday from 1 p.m. to 7 p.m.