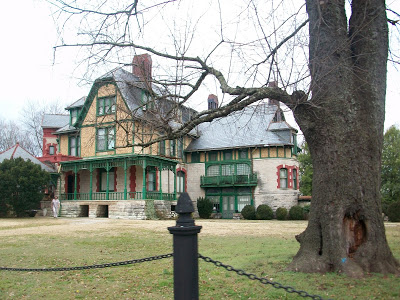 I did this post on The Kildare Mansion a couple of years ago. I have updated to include some of the more recent controversies surrounding this magnificent, haunted mansion. The Kildare Mansion was first famous for it’s ghosts.  It was built in 1886 by a wealthy Irishman named O’Shaughnessy.   He built the castle as a reminder of his homeland, Ireland.   He put a fortune into making it the most extravagant house in the area and he did a good job of it.  This giant of a house overshadows everything around it. It has over 40 rooms and is over 17,000 square feet including the massive basement.   In 1900, MR. O’Shaughnessy went blind and his wife Anna sold Kildare to the trust fund established for Mary McCormick who inherited a multi million dollar fortune from her father

Unfortunately, Mary McCormick was mentally ill and suffered greatly during certain periods.  At the time,  treatment options were limited so they kept her locked in the house and had several nurses and staff to take care of her.  During her lucid periods,  Mary a wonderful woman who was known for her kindness and generosity.   For her entire life, she needed nurses to help her care for her mental illness.  Finally she had to retire to a sanitarium,  leaving her beautiful house behind.

From 1932- 1975, the Kildare Mansion fell into disrepair.   It decayed slowly as slums and lesser buildings slowly surrounded it hiding it’s beauty in their sullen shadows.  In 1975, the house was purchased by the Reeves, who lovingly restored the house to its original splendor  It was during this time that the house was shown in the tour of historic homes and became a popular visit for haunt jaunters.   The house’s basement was notoriously haunted by the ghost of  Mary McCormick.   Still tormented by her madness, she apparently made quite a ruckus at night.

In 2005 the house was bought by a family whose name I won’t mention.  Since that time, the ghosts have become the least interesting part of this house.   The house has always been a favorite site for anyone visiting Huntsville because of its historic significance, its beauty, and its haunted history.  Many people drive by the house and photograph it.   Since 2005, however, the new owners have spent a considerable amount of time watching out for anyone lingering near the house.  If you drive by slowly or stop in front of the house,  a woman will emerge screaming at you.  Sometimes she’ll curse and sometimes she’ll use the garden hose to spray your car.  Other times she would shine a spotlight on you and others she’ll take pictures of you with her cell phone.  No matter what the new owner does, it was always hostile and she seems to always be watching.  She sat day and night waiting for those that linger too long, which might make one wonder if  Mary McCormick’s mental illness might not be spreading?   Perhaps the house and its dark secrets have driven the new owner mad?  Perhaps madness is part of the curse of the house?  I drove by the house several times during this owner’s occupancy.  I brought my children and parked across the street and would never think of harrassing anyone.  The woman came screaming from her home all three times.  One time she threw rocks at my car.  One time she just cursed at my children and I and called the police.  Another time she threw grass and called the police.  We were not on her property, we just wanted to see the legendary house that I had read so much about.  I visit all the local historic houses and have always been able to sit quietly in my car and take photos.  Some owners even offer tours and are on local tours.  Kildare Castle is different.  It sits in a shadow that spreads out beyond its ghosts.  It almost feels cursed. 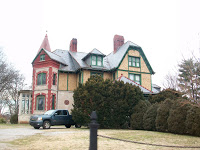 Sadly,  the reason most drive by these days is to see the owner run out and start screaming.  Her wild antics have become a fun attraction for locals who stop by just to see her jump around and scream  Few remember the ghost stories or the house’s beautiful history.

The house has become even more infamous in recent years as the owner has tried to put up a massive fence (13 feet tall) and the city stopped construction.  The owner then decided to demolish the house.  The city and local history buffs are fighting this action but the outcome is as of yet, unpredictable.  Since the owners behavior remains outlandish, the behavior of locals has gotten even worse.  Kids love to see the owner flip out and will sit in front of the house and honk their horn for hours to get a response.  It is a tragedy.  Please read the comments below this post as they tell so many stories from people who have actually lived in this home and in the neighborhood.

Some of the footage and information on the ongoing struggles and controversies surrounding this historic beauty can be seen at:  http://www.kildaremansion.com/