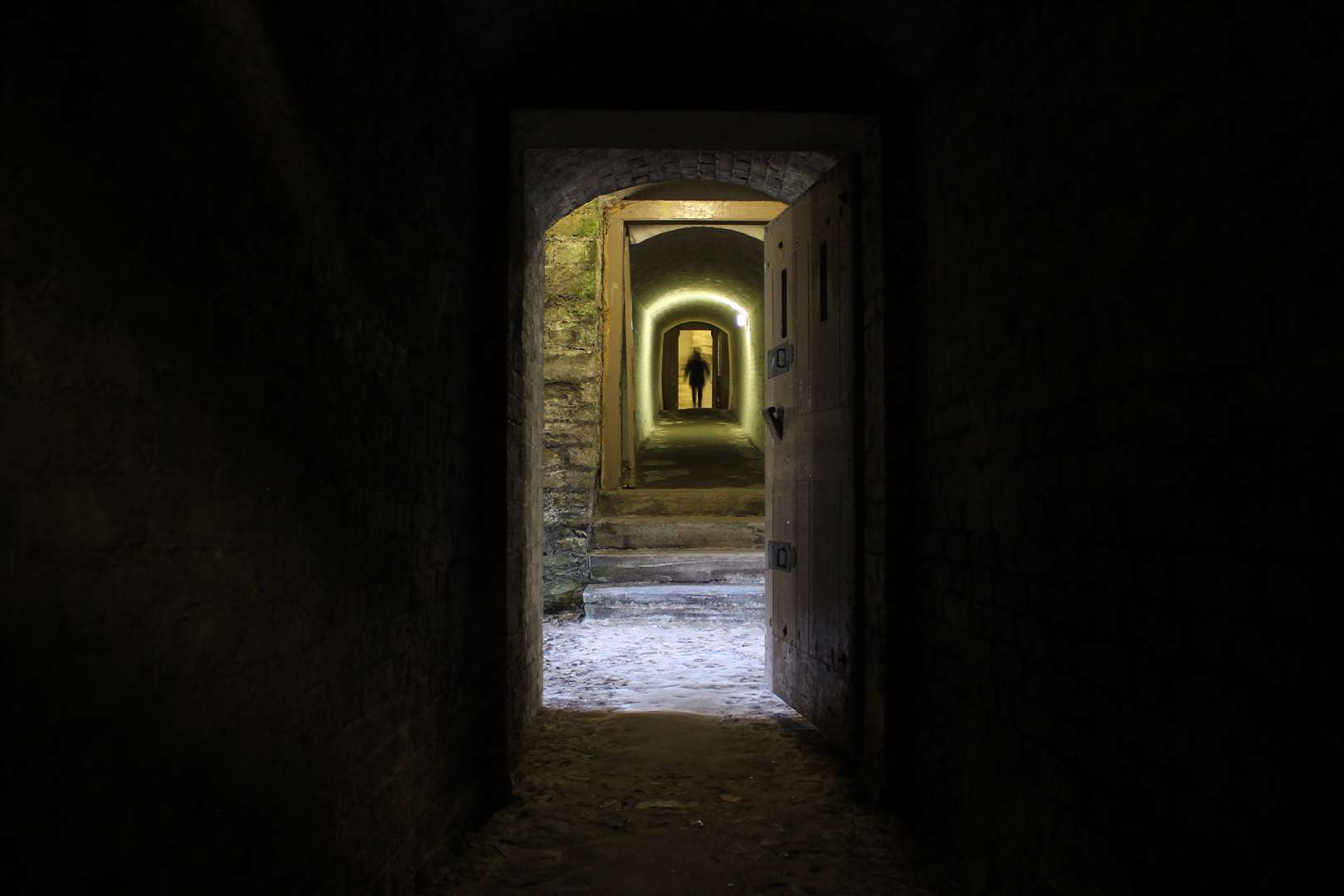 Headless phantoms, kindly spectres or tormented spirits, tales of ghosts in Kent have been passed on through decades and centuries.

No matter where you are in the county, you’re never too far from somewhere believed to play host to some form of paranormal activity.

Whether you are a believer or not, ghost stories are a fascinating aspect of Kent’s history that will continue to be passed on from generation to generation.

Many drivers heading home in the dark are adamant they have laid eyes on an unliving being.

Quiet trips to castles can certainly be unnerving as you explore the old surroundings, while landlords and regulars will tell you of mysterious goings on at almost every pub in the county.

The county is teeming with tales of the supernatural…

So let’s breakdown the most haunted roads, castles and pubs in Kent.

Smiles and sadness – near Wye

Unnerving and unsettling, haunted White Hill is thought to be home to the ghost of a beautiful woman in her 30s, dressed in a long coat.

She is believed to appear in the middle of the road just as a car approaches.

Instead of moving out of the way, she turns and hauntingly smiles directly at the driver just before impact.

As stated in Haunted Places of Kent, one motorist in 2000 recalled hearing a sickening thump and slammed on his brakes. There were however, so signs of blood or impact.

White Hill connects Challock to the A28 near Wye.

Fitted with a huge engine, the car won numerous races in the 1920s and the Count – who lived at Higham House – was seen testing his machinery on Kent’s village roads.

Zborowski, who even raced in the Indy 500, was tragically killed during the Italian Grand Prix in 1924 while driving a different Mercedes.

Following his death, villagers in Patrixbourne began to see visions of the a ghostly Chitty Chitty Bang Bang thundering through the lanes.

It is said the phantom car races down the old A2 before returning to Higham House.

A Celtic chariot drawn by two horses is said to charge down the village’s Watling Street during the night.

It is thought the chariot, which bears a warrior grasping a spear, is on its way to join a fight against the invading Romans.

A battle involving the legendary Julius Caesar against the Celts is said to have taken place in Bridge in the 1st century. The ghostly chariot tale is seemingly associated with the ancient battle.

One of the most famous ghost tales around, the mysteries of Blue Bell Hill are well known.

In 1962, Bob Vandepeer said he gave a lift to a girl on the hill only to later turn around and discover the hitchhiker had vanished in the back of the car.

And then in In 1971, James Skene was driving home from work when he says a girl in her early 20s suddenly appeared in front of his car. He gave her a lift to Chatham, but when she got out she disappeared.

Numerous apparent sightings have followed, with shocked drivers detailing how they have spotted a bride in the road, or even spoken to her about her upcoming wedding before she completely vanishes.

The tale originates from a fatal crash on the road in 1965, when bride-to-be Susan Browne tragically died along with two friends.

Susan was due to marry a RAF technician the following day but her Ford Cortina spun out of control and collided with a Jaguar heading the other way.

Despite a common belief that she died on the road, it was actually her friend, Patricia Ferguson, who lost her life there. Miss Browne and Judith Lingham died a few days later in Maidstone Hospital.

A ghostly white limousine is said to have been spotted on numerous occasions around the roads of Tunbridge Wells.

It is believed to park up on the side of the road before shimmering and vanishing without trace as soon as intrigued onlookers approach.

The imprisoned Duchess of Gloucester was held at the castle for the remainder of her life in the 1400s on charges of practising witchcraft.

Her magic was said to conjure up a huge black dog which began to wander around the castle grounds. As stated in Kent Ghost Stories, the phantom animal is thought to be the suspected sorceress in canine form – or the Duchess’ familiar spirit.

Laying eyes on the beast as it roams around the grounds is thought to bring misfortune on the witness.

Sounds of a baby crying are said to be regularly heard during the night at Reculver Towers.

Remains of infants were uncovered at the former Roman fort site in the 1960s.

As stated in Haunted Kent, it is believed young babies may have been used as sacrifices and placed in the foundations to protect the fort from evil spirits.

The chilling cries are therefore thought to be calls for freedom from their endless entrapment in the stonework.

No source for the noise has ever been discovered by those claiming to hear it.

Henry VIII’s tragic second wife Anne Boleyn is believed to haunt her childhood home of Hever Castle in a number of forms.

She is said to delicately wander the castle grounds while bearing a sweet smile as she explores her former home in memory of happier and more innocent times.

It is thought her ghostly body was brought back to Hever in a spectral carriage following her execution at the Tower of London.

A more gruesome phantom of the former Queen of England is also said to haunt the grounds. Reports of her being seen walking with her severed head tucked neatly under her arm have been told through generations.

Ancient march through the centuries – Richborough

Marching through the fog, a column of Roman soldiers are said to have been seen at the ruins of the Roman fort near Sandwich.

A once mighty fortification, Richborough was a base for a legion of soldiers. Footsteps of phantoms are said to be heard before the noise grows into a steady march.

The Roman warriors can sometimes be seen making their way through the mist – forever marching.

Home to numerous ghosts, the most famous to haunt Kent’s most impressive castle is that of a headless drummer boy from Napoleonic times.

The night-time phantom is thought to be the ghost of a youngster who was on watch duty patrolling the castle’s battlements in case of a French invasion.

Believed to be the unfortunate witness of a crime, his decapitated body was found beneath the castle walls.

Now forever keeping watch, the headless boy is said to still patrol the battlements with his drum hanging by his side.

Other spectres to linger at the castle include a soldier in the Second World War tunnels, a lady in red inside the keep, and a cloaked gentleman sporting a large hat from the 1600s.

Things you do for love – Rochester Castle

Having been fatally shot in the heart with a crossbow bolt not intended for her, Lady Blanche de Warrenne is said to persistently haunt her place of death at Rochester Castle.

She had won the hearts of a number of men in the 13th century and was unlucky enough to become a tragic victim of a quarrel.

A bolt shot by her future husband, Ralph de Capo, was intended to kill admirer Gilbert de Clare, but it glanced off his armour and pierced Lady Blanche’s heart.

As described in Ghosthunter Walks in Kent, Lady Blanche appears hundreds of years after her death with her long hair fluttering in the breeze.

Pacing back and forth along the battlements and wearing a gown, she can be glimpsed briefly before vanishing.

Formerly a priory, one of Kent’s oldest pubs, The Coopers Arms in St Margaret’s Street, Rochester, is believed to be haunted by a phantom monk who appears once a year in November.

The monk was said to be buried alive in the walls and left to die for committing an unforgivable sin against the Brethren of Coopers.

Now, he hauntingly reappears, coming out from his walled grave. Some say he has a look of anger on his face before returning from where he came and reappearing the following year.

Dubbed the most haunted village in England, Pluckley draws in ghost hunters from across the country.

Standing in the heart of the village, The Black Horse is thought to be haunted by an invisible phantom known for moving glasses and belongings which can go missing for days on end.

Coats draped over the backs of chairs also mysteriously make their way to hooks by the pub’s front door.

The 14th century pub, in Aldington, near Ashford, was once the headquarters of The Aldington Gang, a group of smugglers who brought in goods across the Romney Marsh.

One night while waiting for a signal from colleagues, some of the gang began playing cards, violence erupted and one member slit the throat of another.

Nowadays the murderer can be heard at night taking the body to the well to be disposed of. Sometimes the sounds of scuffling and a body being dragged outside can also be heard.

Footsteps of an unknown individual are often heard making their way up the steps from the cellar at the Ringlestone pub.

As the noisy ghost nears the ground floor of the pub, it’s expected he will become visible. However, when he nears the top, the footsteps cease and the ghost remains illusive.

It is thought the phantom has never made it to the bar and continues to linger in the cellar – occasionally heard moving barrels around the floor.

Read more: All the latest news from Kent