Home Paranormal News Locked down with ghosts, secret chambers and cursed stones in north-east’s most... 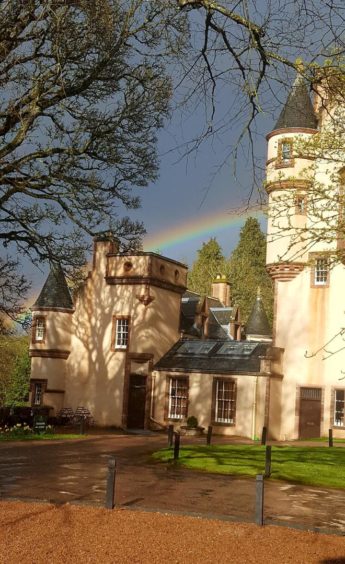 Stuart Stockley is in lockdown in the most haunted castle in the north-east of Scotland.

For the past 10 weeks he has been following the Stay At Home message with his family in Fyvie Castle – the 800-year-old stronghold replete with tales of ghosts, a Green Lady, mysterious Weeping Stones and a sealed, secret room reputed to render anyone who enters it blind.

“It’s quiet and feels strange, to be honest,” said Stuart, who is the gardener at the National Trust For Scotland property near Turriff.  “There’s no one around and the grounds are closed as well, so we have the place to ourselves, we have the run of the place.”

Stuart, 38, lives in what was the butler’s flat inside the castle with his wife Deborah, and kids Eloise, 13, and Harry, 16.

It’s up to Stuart to deal with anything untoward – like a security alarm that keeps going off for no reason at all, day or night, forcing him to go to investigate.

“The alarm sensor seems to go off in the same place in the castle and I have to go through, in the middle of the night when it’s pitch black. We have all these energy saving lights so you put them on, but they are so dim. To be honest, I don’t like it at all.

“It’s always at the same point, outside the library corridor and around that area. It’s only when you get there… it’s just a feeling that I want to get out of there.

“I’m fine walking through the rest of the castle, but when I get to this point, it’s just unnerving. And that’s always the place the alarm goes off. We have had engineers out to look at the alarm many a time and there’s nothing wrong with it. There’s no reason for it to go off, nothing’s triggered it.”

So, where exactly is this spot that leaves Stuart feeling so uneasy?

It is directly below the Drummond Bedroom, one of the most haunted rooms in Fyvie.

Stuart said: “The story goes that the ghost of Lilias Drummond haunts that area. Lilias, having failed to produce a male heir for her husband, Alexander Seton, was imprisoned in the castle and died of starvation.”

“Seton remarried quickly and he and his new young wife spent their wedding night in the bedroom. Lilias’s ghost haunted them that evening. They were lying in bed and heard scratching in the middle of night and later found Lilias had scratched her name into the stone windowsill.”

Stuart said he is not a great believer in ghosts and tales of the supernatural, but he’s still glad that during lockdown the alarm has only gone off during the day… so far.

“But when the alarms go off in the middle of the night and I have to walk down there… my mind takes me there and I’m uneasy. It doesn’t feel nice being there. You just want to get out. I just want to check no one has broken in, then just go.”

Stuart, who is originally from Essex, and his family have lived in the castle for eight years and say there is nothing spooky at all about the butler’s flat where they live. But other staff who have worked in the castle have heard and seen things over the years, he said.

“When we first moved in, we were told the story that if you smelled rose perfume in the castle, that’s where Lilias Drummond has been, or she’s in the room, because she always wore that perfume.

“Many people have walked into a room and smelled this faint perfume and wondered where it’s come from, because at the end of the day it’s an old fusty building and we don’t have Glade plug-ins.

“When I first moved I was in the basement of the flat. It’s a stone vaulted room, that used to be the coal shed but was once the old stables. It’s a bit of a manky room, full of soot. I was cleaning it up so I could use the room and I got this smell of what can only be described as rose perfume. It certainly wasn’t me and it certainly wasn’t that fusty room.

“I found that a bit strange after people had told me if you smell her perfume, she is present. That only ever happened once in our house, when we first moved in. Maybe she was just welcoming us and checking us out.”

There have been numerous sightings of a Green Lady ghost over the years and many visitors have spoken of getting that waft of rose-scented perfume.

The shade of Lilias Drummond
isn’t the only supernatural
tale which abounds.”

But the shade of Lilias Drummond isn’t the only supernatural story that abounds in the walls of the ancient castle.

There is the legend of the Weeping Stones of Fyvie. It is said that Thomas the Rhymer, a 13th century seer, was denied shelter in Fyvie on a stormy night. He laid a curse that no male heir would inherit the castle until three stones used in the castle’s construction are returned to the sacred burial site they were taken from. The stones, one of which is still in the castle, are supposed to stay wet when all is dry around them.

Other reported ghosts of Fyvie include a phantom trumpeter, a little girl called Annie and a cigar-smoking figure flitting along the halls.

Little wonder that the ghost hunters of the popular TV show Most Haunted, including Derek Acorah and Yvette Fielding, visited Fyvie Castle for an episode in 2009 and said it had some of the greatest paranormal activities they had encountered.

But Fyvie was making headlines long before that. In January 1920, the normally staid Press & Journal carried a shock headline proclaiming: “Green Ladye’s ghost seen in Fyvie Castle”, adding: “Maid’s remarkable story. Skeleton built in the wall: What followed its removal”.

The story goes on to tell that a week or two before, a wall in the castle was torn down to investigate a damp patch.

The Journal reported: “Cemented among the rubble was found a complete skeleton. The bones were buried in the local churchyard. Their removal was the signal for boisterous disturbances throughout the castle.” 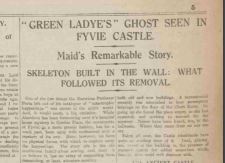 The reporter of the day interviewed a maid in the castle, Miss Massie, who described herself as a girl with no belief in ghosts or supernatural happenings.  She tells of being in bed when: “Shortly before 5 o’clock, a white object stepped out from the wall near the head of my bed.

“I could not make out the features, but the figure was that of a lady dressed in a wide, flowing white gown. I was too terrified to speak. She sailed across the room and, looking round at me, as I imagined, before she left, disappeared into the door opposite.”

The whole household
corroborated the tales
of noises and disturbances.”

The P&J said the whole household corroborated the tales of noises and disturbances. Miss Kellas, the housekeeper, said she frequently heard thuds, knocks and moans, but they had become worse since the bones were removed.

One maid, Minnie, was so scared she left her employment at the castle to go back to live with her father.

The story went on from the P&J to be reported far and wide around the country, cementing Fyvie’s reputation as a hotbed of the mysterious and paranormal.

So, too, did a Press & Journal story of September 1930, headlined: “An attempt to solve the mystery of the secret chamber”. Far from being a Harry Potter-esque tale, it’s a rather dry account of a visit by the Deeside Field Club to learn of the history of Fyvie Castle.

But the report did detail mysterious events which had happened 45 years earlier in the castle’s Meldrum Tower.

In this tower was situated
the famous secret chamber
which had neither door nor window.”

It said: “In this tower was situated the famous secret chamber which had neither door nor window. In 1885, the last of the Gordons, Sir Maurice Duff-Gordon, set workmen to break into this room and they came across the top of a staircase leading downwards.

“Something happened, however; the laird fell and broke his leg and his wife’s eyesight began to fail. The workmen had to stop work and everything was put back in place.”

Today, Fyvie Castle is quiet and empty, save for the Stockwell family.

Stuart said he and his family count themselves lucky to live in the butler’s flat, enjoying its quirky characteristics. “I have a turret in my bedroom. It’s quite special.

“The grounds and the gardens are what draw me to the place, that and the architecture of the building, more so than the contents. The building itself is something else, it is just incredible.”

Just now, he is kept busy maintaining the extensive grounds including its Walled Garden, American Garden, Woodland Garden plus the estate grounds and driveway. He is working alongside head gardener, Gordon Thomson, who also lives on the estate in the Gardener’s House and says the both of them are working flat out.

“I love it, it’s a fantastic job. I get to live in this beautiful place, which is brilliant,” said Stuart.

Stuart is looking forward to welcoming the buzz of staff and visitors again, whenever Fyvie’s splendid isolation comes to an end for the castle – and for his family.

“It feels very strange being so quiet and it will feel great to welcome the public back in,” he said.

There is, however, one burning question that has to be asked of a man living with his wife and children in a remote Gothic pile. Have you ever seen The Shining?

“Yes I have,” he said, laughing. “But I don’t ever think of that. I used to watch a lot of horror films and I still quite fancy them from time to time. But, actually, living here I do avoid them. Your mind goes places, so I’m not up for watching Poltergeist or things like that.”

800 years of history at Fyvie Castle

Fyvie Castle’s roots go back to an early stronghold built in the 13th century, most likely a square wooden structure surrounding a keep where Scottish kings would stay as they toured their lands.

It has had many royal guests over the years, including William the Lion, Robert The Bruce who held an open air court there and the less welcome English king Edward I -“The Hammer of the Scots” – who seized the castle.

It is said Charles I, as a prince, learned to walk on the famous stone wheel staircase of the castle while under the guardianship of Sir Alexander Seton, Lord Fyvie.

Fyvie has been home to five successive families, Preston, Meldrum, Seton, Gordon and Leith, each modifying and adding to the stunning structure with its soaring towers.

The influences of the centuries can clearly be seen in the architecture and design, from the medieval to the Edwardian.

Bought by the National Trust For Scotland in 1984 it opened to the public on May 1, 1986, with the NTS describing it as “the latest jewel” in their crown.

Today, Fyvie boasts one of the riches portrait collections in Scotland, with works from artists including Gainsborough. It also has the largest collection of paintings by Scottish painter Henry Raeburn in the world.

The collection also contains fine furniture, tapestries, as well as arms and armour in the huge chambers of the castle.