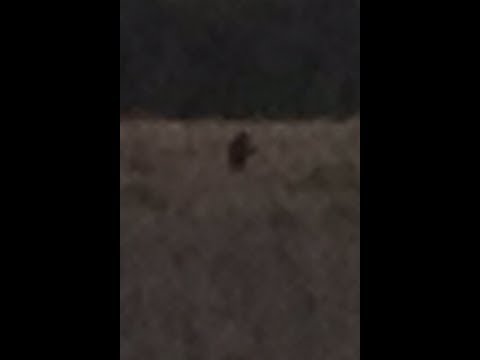 SARASOTA – Spring 2013, low water at Myakka River State Park, after midnight, chilly, and Stacy Brown’s posse is in pursuit of the great unknown. Equipped with thermal camera gear and strapped into stifled headlamps, they cross the low dam that separates the Upper Lake from the Myakka River and make for the western shore.

Bill and Stevie take the point, Josh and Emmette fall back 50 yards, and bringing up the rear is Stacy Brown, 50 yards behind Josh and Emmette. “We walked the beach at first,” he says. “And as soon as we do, this group of wild hogs comes running out. They ran right past us – they were running from something else.”

The team wanders into the brush, determined to flush it out. Stevie pulls up. Movement behind a tree directly in front of him. No sooner does Stevie creep in for a closer look that whatever it is bolts, plunging south toward the rest of the team.

“Bill and Stevie start hollerin’ ‘It’s comin’!’ and it’s hauling ass, and Josh and Emmette hear this thing coming through the woods, just barreling right toward them, and they’re taking pictures and backing up like they’re gonna get run over,” Brown recalls.

“I crouch down in this palmetto clearing, and it sounds like an elephant coming through the woods. And I’m reaching for my pistol and I turn on my lamp and I hear it come to a dead stop before I could get a good look at it. Then it turns and you could hear it heading for the river.”

Brown’s crew scours its trail for clues, finds a deposit of fresh scat (“it evacuated its bowels,” he translates), and locate foot tracks, poorly impressed on account of the dry season. The photos and video are a wash. The scat they collected (“we didn’t know what we were doing”) contains no DNA.

Far from being discouraged, however, the 36-year-old videographer/musician from Crawfordville says near-misses like this only whet his appetite for another pass at the elusive quarry. Known in Florida as the Skunk Ape, the phantom occupies a special niche of cryptozoology known by many names, most generically as Bigfoot.

Baiting hunters with little more than tracks, blurred footage and ambiguous tufts of hair, its lore transcends geography and culture. And its aura as a tall, hairy, muscular biped spawning campfire tales in myriad ancient traditions has assumed mythological stature. But researchers like Stacy Brown are convinced that advances in recording technology will someday prove, once and for all, that his obsession is not only real, but scientifically compelling.

After all, on a soggy night outside rural Chattahoochee, in 2012, Brown caught something on video that went viral and wound up on an episode of “Finding Bigfoot,” a long-running series on Discovery Channel’s “Animal Planet.” He turned that encounter into a documentary, “The Skunk Ape Lives.”

Now, thanks to an assist from an inquisitive Sarasota businessman, Brown plans to revisit that close call from 2013 with a new documentary, “Monster of the Myakka.” And what lured him to this corner of Florida in the first place seven years ago was yet another piece of footage, captured by Michael Falconer, who lives on the rural outskirts of the park.

On March 2, 2013, Falconer and his son Justin were driving along Park Road when they noticed a cluster of parked cars and people pointing west toward the Myakka River. The two hopped out and saw something trudging away from the road, toward the floodplains. They tore out after it, and Falconer recorded the chase on his iPhone 4.

“Well, I saw something that was very big, very tall – more than six feet tall, for sure – and it was shaped like a person,” Falconer says. “And it was very dark. And it was maybe one-third of a mile, maybe a half mile, away and it kept moving away. The thing was actually on the other side of the Myakka River, but I didn’t know that until it started getting muddy and I wasn’t able to continue after it.”

Falconer, a lifelong hunter, would comb the area for clues. “You get really excited, and you want to know what’s going on.” He would discover a footprint that measured 15 inches from heel to toe, and he took note of other peculiarities.

“I noticed more buzzards than I’d ever seen out there before, a ridiculous amount. And as I started walking out there,” he said, “there were more dead wild pigs than I’d ever seen, and that’s what the buzzards were feeding on. Some were fresh kills, some had been there for a little longer. I came across one that was hopping around on three legs because one of its front legs was snapped.”

Bottom line: Falconer posted the video of his chase on YouTube. “Unfortunately,” he says of that distant blip of an image, “it’s not very good, because it didn’t have any zoom capacity.” Even so, the footage, which stretched just over three minutes after editing, blew up on the Web and drew tens of thousands of views. One of those who tuned in was Stacy Brown.

“We got a report of a congregation of people on the side of Park Road, so one of our rangers went to check it out,” he says. “We evicted a young man from the park that day who was caught wearing an ape suit. The park has a long history of people doing that kind of stuff for laughs.”

Falconer doesn’t buy it. Nor does Brown, whose own footage from another part of the state was considerably more detailed.

On the damp, muggy evening of May 8, 2012, at north Florida’s Torreya State Park, Brown and his father, Stacy Brown Sr., set up camp in hopes of attracting attention. Upon hearing knocking noises, they stalked the sounds into the forest; Brown Sr. steadied a forward-looking infrared (FLIR) camera, capable of profiling heat sources in the dark.

What showed up on the video during this breathless encounter, maybe 50 yards away, was a three-second glimpse of a long-armed, broad-shouldered heat-radiating silhouette peering from behind a tree. It took one lumbering stride into full view, then vanished into the bush. Spooked, Brown Sr. turned tail and urged his son to get back to camp as the night throbbed with the rhythms of insects.

“Finding Bigfoot” host Cliff Barakman would eventually analyze the footage and data provided by the Browns, which included staged onsite FLIR images of a model who stood 5-foot-9 inches tall. Barakman’s detailed report concluded that the original subject measured more than 8 feet from head to toe.

The Torreya footage became the cornerstone of Brown’s hour-long “The Skunk Ape Lives” documentary, which premiered at the International Bigfoot Conference in Kennewick, Washington, in 2018. After major reedits, Brown dropped the film on Amazon this year.

Brown’s documentary represents nearly a decade of research, drawing on eyewitness testimony, newspaper clippings – two sheriff’s deputies alleged to have shot and hit a skunk ape near West Palm Beach in 1974; two Taylor County fishermen said they shot one in 1983 – native legends, and historical records. (Contrary to popular belief, Brown asserts, the Florida version took its name not from its scent, but from a 1940s-era Panhandle sighting in which the subject allegedly had a white stripe running down the middle of its head.)

In fact, Brown opens the film with an early 19th-century account published contemporaneously in the Milledgeville, Georgia, Statesman. In January 1829, the story goes, a band of hunters, tracking a set of 18-inch-long footprints separated by 6-foot strides, was attacked by a “monster” with a “ferocious look and terrible mien.” Before “receiv(ing) the contents of seven rifles,” the creature decapitated five of its pursuers before it fell, “writhing and exhausted.”

And it’s that thread – not of a benign, shy Wookie, but of an aggressive and potentially dangerous presence – that Brown intends to explore with his “Monster of the Myakka” documentary. Given reports of strange lights and electronic interference with recording devices that are occasionally associated with Bigfoot sightings, Brown wonders if the Native American legends about an entity that “wanders between worlds” might be on to something.

“As humans, we’re interested in the unknown,” says park manager Giguere, “so it’s natural for people to see something that’s mysterious and exciting, so this is not something we discourage by any means. It’s just that there’s no evidence of an animal like that existing.”

James Brost, managing partner of Axiom Search, a Sarasota company that identifies and unites engineering talent with firms nationwide, isn’t so sure.

Brost met Brown last year at Crowley Museum & Nature Center during a Halloween event his company was sponsoring. Extended conversations convinced Brost to conclude there’s enough evidence for Bigfoot “to convict somebody of a crime if presented in a court of law, but easily dismissed by the casual observer.”

Today, Brost is supporting Brown’s project and is listed as a producer in the trailer. “Most of us sit on our couches watching made-for-TV shows around this subject, yet Stacy lives it, in the woods, in the swamps, all over the country,” he states in an email. After acquainting himself with the research, Brost says he now brings a more appreciative new eye to the natural world.

“If nothing else,” he says, “it has me out there hiking and exploring the Myakka area, which is beautiful. Just that alone is a benefit.”

For Brown, the only question that matters is not if, but when?

“I want to be the one to prove it. If somebody proves it before me,” Brown says, “my feelings are going to be hurt.”

Got any local skunk ape stories? You can forward them to skunkaperesearch@gmail.com