Home Paranormal News Halloween: ‘They would have realised that for 10 minutes they were trying... 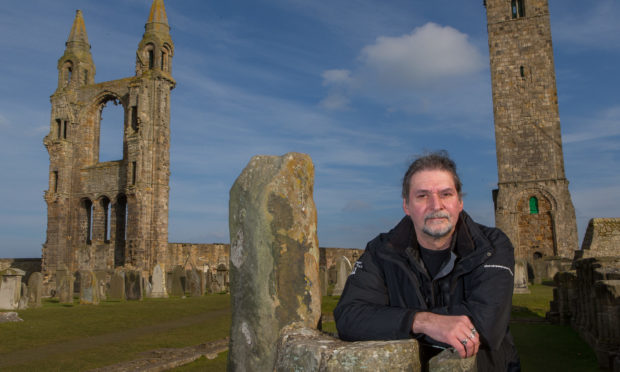 In a town famed for ghosts such as the White Lady and the Veiled Nun of St Leonards, St Andrews author and ghost tour guide Richard Falconer has experienced over 100 paranormal incidents – always with other people and around half of those on his tours.

He always tells visitors: “If you do experience something it won’t scare you, it will confuse you. You can’t deny the reality of what you are experiencing but it conflicts with what we have in our minds – every time”.

One of the more interesting experiences is included in his new non-fiction book ‘More Ghosts of St Andrews’ which comes out later this year.

“I had an elderly party from Austria on a tour – they were more interested in the history than the ghosts,” says Richard of the December 2015 encounter.

“We had just reached the end of South Street in front of the cathedral ruins.

“It was dark and the moon lit the ruins more so than the spotlights highlighting the ruins over the last few years.

“I was talking about the ghosts of St Rule’s Tower when a woman pointed and said: “Richard, there’s someone in the window.”

“It was a figure in white moving across the top window of the tower from side to side, but not consistently.

“The Austrians viewed this figure as an observation, nothing more.

“They thought it was a woman in a white dress standing in the window, highlighted and vibrant with the moon.

“I said: “What you’re looking at shouldn’t be there, I’d get your camera phones out. You do realise behind that window it’s a hundred-foot drop – there is no floor!”

“They didn’t believe me. I said, “If you come here tomorrow, when entering the tower look up, it’s hollow.”

“Everyone saw the figure, and indeed some were mentioning it to their partners if they could see it as well, their replies were, “of course!”

“I don’t know how long we could have observed the figure for. Ten minutes later we carried on the tour, it was still there when we moved on.

“Had the group been more interested in ghosts, they would have quite happily foregone the rest of the tour and continued their observation until it disappeared – however long it might have taken.

“As we moved on, some of them still thought I was pulling their leg about there being no floor which I found quite amusing.

“If they did go in the tower the next day it would have changed their lives. They would have realised that for 10 minutes they were trying to take a photo of a ghost!”

Gregor Stewart is a member of Scottish Paranormal, one of the oldest paranormal research societies in Scotland, and an author of numerous books covering forgotten local history, ghost stories and the witch trials.

Being born and raised in St Andrews, he was surrounded by history and, with that, stories of hauntings.

One that caught his attention from an early age was that of the White Lady of St Andrews Cathedral. “It is said that her phantom form is seen gliding through the cathedral ruins late at night,” he says, “and also walking along the wall adjacent to Gregory Place, towards a distinctive, square tower built into the wall where she would vanish.

“It was also said that if you placed your hands through the gates in this section of wall, you would feel her gloved hands holding yours.

“It seemed almost everyone in the town had heard the story, with many claiming to have either seen the White Lady or to have known someone who had seen her.

“What truly fascinates me about this story however, is the physical evidence seemingly supporting the story.”

Gregor explained how when the cathedral and its grounds were being cleared and prepared as a visitor attraction, by which time the tale of the White Lady ghost was already known, stonemasons discovered loose stones in the wall of the tower.

An article published in The Courier on July 3, 1861, reported the incident, and what was discovered within.

Upon removing the loose stones, the stonemasons found a short stair case that had been sealed, which led to a previously unknown burial chamber containing several well-preserved bodies.

Unfortunately, the chamber was resealed, however it was found again in 1868 when it was again reported the bodies remained inside, this time with it being said one was that of a young lady, dressed entirely in white. 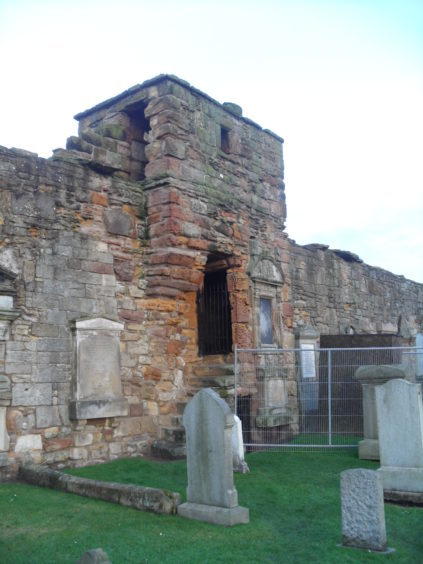 Again, the tomb was resealed, but as word circulated it was accessed several more times over the following two decades.

“The position of the bodies and coffins differed with each opening, until they vanished,” he says.

“Dean W T Linskill, author of the book ‘St Andrews Ghost Stories’, published in 1900, was one of those who entered the tomb and described the body of a woman dressed in satin, which became dust upon touch.

“Despite the discovery of the bodies, reports of sightings of the White Lady continued.

“On October 7, 1902, the Dundee Evening Telegraph published a story of an elderly fisherman who had been returning to the town from the harbour one evening. 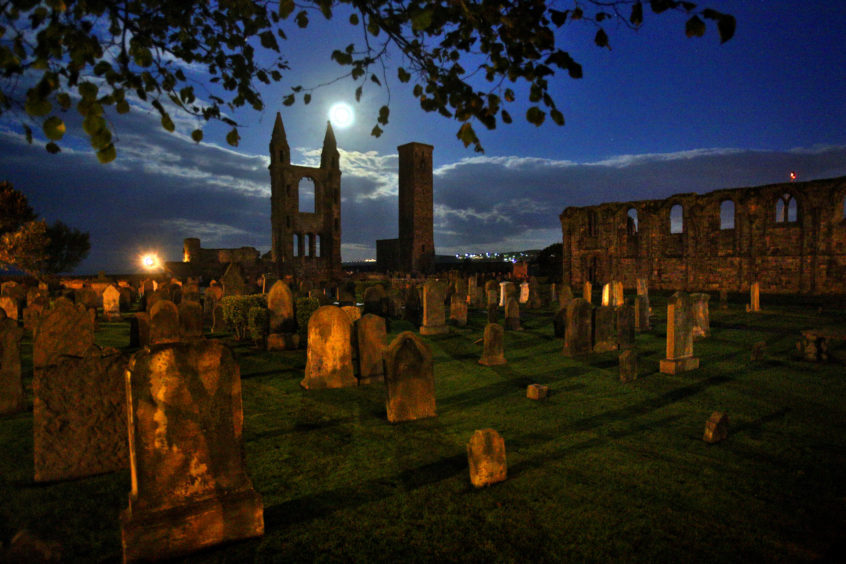 “As he approached the tower, he saw a hand sticking out from an opening in the wall, but when he rushed to take hold of it, his own hand passed straight through it and it vanished!”

Leven-based Lenny Low, author of The Weem Witch, has become an expert on Scotland’s infamous witch hunts of the 17th and 18th centuries.

He has a particular interest in the Pittenweem witches – five Scottish women accused of witchcraft in Pittenweem in 1704.

Another two women and a man were named as accomplices. Accusations made by a teenage boy, Patrick Morton, against a local woman, Beatrix Layng, led to the death in prison of Thomas Brown, and, in January 1705, the murder of Janet Cornfoot by a lynch mob in the village – finally crushing her to death under a door laden with rocks.

Just over a month ago, Lenny was approached by a local fisherman who said he heard screams emanating from the spot where Janet Cornfoot was murdered.

However, Lenny revealed this was not the first time he had been contacted about “strangeness” in the area.

“Back in 2010 I sold my books during the arts festival from the tower dungeon that once held the witches of Pittenweem – all 26 of them,” recalls Lenny.

“A woman in her 50s approached me with a strange tale, and it’s remarkably connected to the fisherman’s tale above.

“It’s the 1980s, a hot summer, and where better to take the kids but the seaside – Pittenween where the old natural harbour holds a sandy grain fit for any child’s magnificent sandcastle.

“The mother left her 5-year-old to dig away as she warmed her bare feet in the hot sands. Suddenly they were not alone.

“A woman in bad dirty rags was standing not 10 feet from her, smiling, and gesturing with her hand at the child’s efforts of a sandcastle.

“The mother politely smiled at the strange woman, looked at her child, then back towards the frail woman in rags…but she was gone! Immediately vanished!

“This was indeed instant as she was nowhere to be seen. No one was around and clear views for over 100 yards each way showed no woman in rags!

“Then it struck – the woman had left no footprints in the sand. Nothing. Not even where she had been standing.

“The woman asked her child “did she see the lady standing there” to which she replied: “She seemed nice yes!”

“It was a conundrum of mystery for the next couple of decades.

“Then she read The Weem Witch and the chapter on Janet Cornfoot’s horrible death and where exactly it took place!

“It hit home – exactly where she had seen the strange lady.

As memories returned of the strange day on the beach with her daughter, it could now all make sense – had she seen the ghost of a murdered witch called Janet Cornfoot?

“And are her ghostly screams a lament of a bad day many years past?”