For cryptozoologist Lyle Blackburn, the Southern Sasquatch remains an ever-elusive but endlessly fascinating subject, so much so he’s now written his second book on the subject.

Texas-based Blackburn should be well-known in Fouke, Arkansas, where he’s researched the Fouke Monster, who inspired his book “The Beast of Boggy Creek.” In that chronicle of the local Boggy Creek Monster, he took an even-handed, curious and serious look at the subject.

Inspired as a youngster by the legendary, low-budget, Charles B. Pierce horror flick “The Legend of Boggy Creek,” Blackburn developed a healthy interest in the Fouke Monster of that film and similar critters described in legend and lore, the Texarkana Gazette (http://bit.ly/2ljY3k2 ) reported. Just look at the title of his other book, “Lizard Man,” for a clue to his fascinations with monsters.

Now, Blackburn has returned with “Beyond Boggy Creek,” out now from Anomalist Books. The author, a Rue Morgue magazine contributor who’s appeared on several TV shows and was featured in the documentary “Boggy Creek Monster,” takes a wider approach to the Sasquatch story in his new work.

After the release of “The Beast of Boggy Creek,” Blackburn explained, not only did he receive additional reports of Fouke Monster encounters, he also heard stories about Bigfoottype creatures originating from across the wider South.

Blackburn discovered more to explore, essentially, material to make a new book, which he’s dedicated to the memory of J.E. “Smokey” Crabtree.

“With `Beyond Boggy Creek,’ I decided to sort of start with that premise,” Blackburn explained. He starts with these additional local stories, then moves on geographically across the map, following the Sulphur River, Red River and across the Deep South all the way to Florida as the stories, of more recent vintage and those generations old, populates the landscape with a Southern Sasquatch.

“I try to include the ones that seem to be the most credible, obviously, ones that either had some documentation in old newspapers or ones where I could interview the persons themselves,” Blackburn said. Rather than including anything he found plastered on the Internet, he looked for a basis of accountability.

“I try to, whenever possible, actually track down the original witness and hear the story straight from them,” Blackburn said of these Southern Sasquatch stories. The approach makes for a better book, he believes. It’s what he did in Fouke, but here in the new book it’s done on a grander scale.

In addition, as a lifelong fan of “The Legend of Boggy Creek” and the dramatic Fouke Monster sightings therein, he looked for that ingredient in these stories, too. “You want something interesting,” he said.

Generally, these Southern Sasquatch tales first found their way to newspaper documentation during the 1800s, Blackburn said. “I go back loosely to Native American accounts, which are vague and subject to interpretation,” he explained of the timeline with which he worked.

He saw common threads in these stories. Various hair colors were mentioned, but a generally consistent height was referenced for what would be seen as an adult creature with “in some cases bipedal locomotion, as well as moving on all fours.” Such common features referenced from story to story suggest a creature could conceivably be one and the same, he said. “As far as what I found as the commonality of the creatures described in these cases, it was fairly consistent as to what you have in the Boggy Creek case,” Blackburn said.

In his research, the writer discovered accounts that, taken together, didn’t appear to be collaborative as if people were trying to concoct similar stories together. Instead, similarities seemed to arise naturally.

“I think that one of the most interesting things of that nature would be that I would research a case in perhaps a sighting that occurred in a specific area that at first may seem isolated, but the more I researched I would run across perhaps modern accounts of a similar creature given by people who didn’t even realize that there had been a history of sightings,” Blackburn said, “which of course to me strengthens the credibility.”

As he discovered with his research into the Fouke Monster, he suspects people may not realize that there have been as many sightings as there are and that they’ve continued. It’s what he saw when he looked into the Boggy Creek Monster, after all.

Of course, people will express skepticism about the cryptozoology field and its monster sightings or mysterious encounters. That’s the nature of the field in which Blackburn works.

To them, he’d point to the powerful hold these stories have, though, and that makes them important.

“I think that I can understand if people have their doubts about the existence of these creatures, but there can be no argument that they are ingrained in our culture in our stories, even so much as they’ve gotten into pop culture,” Blackburn said. His books strive to capture just how much of a history has developed with these sightings.

“From whatever angle you want to look at it, there’s value,” Blackburn said. 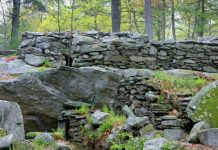