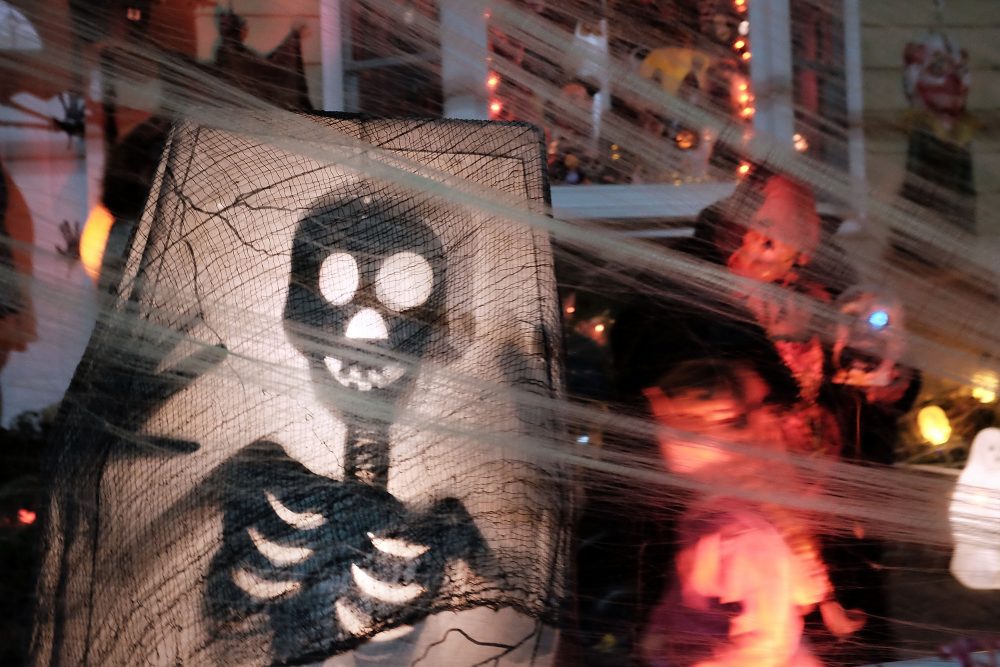 October is the perfect time to tell scary stories, but Glynn Washington gives people a platform to share their haunting experiences all year round with the podcast “Spooked”.

A part of WNYC’s “Snap Judgement,” “Spooked” features people telling their own true-life supernatural stories. During the first year of “Snap Judgement,” Washington says the team decided to air a show packed with seemingly unbelievable first-person storytelling around Halloween.

These stories were told in the same way the show would talk about anything else, he says, and the episode was the most downloaded one of the year.

“I had stories of my own that didn’t make any sense to me. And I thought maybe I was the only one who had those stories,” he says, “and it turned out nothing could be further from the case.”

Washington grew up in what he describes as a religious cult, but his extended family wasn’t a part of the group when he was very young. When pastors or doctors couldn’t help people in his neighborhood, they would come to his grandmother’s house.

He would lead people through the house hand-in-hand to his grandmother sitting on the back stoop. Perched on a small wicker chair, people would ask his grandmother for things.

Women would say their husbands were gone, for example, and ask for help getting them back, he says. His grandmother would take strands of hair from the husband’s brush, put it in paper and burn it to ash. Then, she wrapped it in foil and chanted over it, sometimes telling the woman to put it under her bed so the husband will return in three days.

When his grandmother would say she couldn’t help people, they would beg Washington to ask her to reconsider.

One of Washington’s favorite stories from the podcast was told by Lee, who was 14 years old when he something caught his attention on the side of the road during a late-night drive home:

Part of the appeal of this story to Washington is hearing a real person tell their own story. The skinwalker phenomena often comes up in Native American cultures — and people are reluctant to share with outsiders, he says.

“Oftentimes when someone tells a story on ‘Spooked,’ at the end of the process you can see almost a burden being lifted, a weight gone from this person,” he says, “because it’s like the stories that you can’t tell anybody else. Tell us.”

There’s never any doubt that what people describe on the podcast feels utterly real to them, no matter how outlandish it may sound to the audience. Listeners must balance these two opposite ideas in their heads simultaneously, he says.

‘The Haunting Of Radio Centro’

In another one of Washington’s favorites, the storyteller, Guillermo, works at Radio Centro in Mexico City. There are rumors that the station is haunted with ghosts roaming the hallways.

One night, Guillermo is hosting the stations’ paranormal show “Tell It Tonight” when this happens to him:

“We ran the promos for all the shows people could listen to throughout the day. The last promo was the one for ‘Tell It Tonight.’ I hit play to start the first promo, then the second. The third promo was about to play when the machine jumped. And we hear the organs like the music from the beginning of the promo. Knobs went up to maximum volume, drowning everything out. I get super hot like my temperature shot up, the audio is still loud. I turn down the speakers and let the promo run,” Guillermo said. “And when I hold on to the table to lean back and stand up to refresh myself, I start to feel very ill. In that moment I feel as if someone is leaning on my back. I feel a chest against my back and breathing right in my ear. I hear it on my left side, I hear it. And with his hands, he started to squeeze my head. So I pushed myself up from backwards so I could free myself from this entity.”

It’s hard to pin down a collective theme in these stories, Washington says, beyond that these creatures are most active at night rather than during the day.

“Every single culture, they have their own monsters and those monsters always obey different rules depending on where you are,” he says. “The djinn in North Africa is going to be very, very different than a ghost in Maine.”

Washington says he doesn’t exactly believe the stories, but he also doesn’t think people are lying. The podcast team works hard to “weed out all the crazy” and find “credible,” “respected” people who have had strange experiences, he says.

And Washington has had plenty of bizarre experiences himself, including one of his earliest memories. Asleep in his bed next to his baby brother, the pair looked up to see a face floating above them. The brothers called out to the face but it didn’t answer. Instead, he says it kept looking at them with curiosity until it vanished.

When the boys went downstairs to tell their mother about it the next day, she wasn’t there. Instead, his grandmother said not to worry and that their mother will be back.

A day and a half later, his mother returned. He recalls that she seemed sad and didn’t look at her sons. Washington didn’t understand what happened until he overheard her talking to his aunts about losing a baby.

“I know then that our sibling had come back to give us, his brothers, a visit the same night that she was in the hospital. And I don’t want to tell her that because I think that I’ll make her angry and sad and scared,” he says. “I think it’s one of those earliest things where, you know, this is a secret you better keep.”

Marcelle Hutchins produced and edited this interview for broadcast with Tinku Ray. Allison Hagan adapted it for the web.