For more than six decades, Loren Coleman has dedicated his life to Sasquatch. Since beginning his investigatory fieldwork in 1960, he’s written books, given talks, and taught university courses related to the concept of Bigfoot and other cryptids — the accepted term for animals which straddle the borders between the documented, the imagined, and the forged. In 2003, he founded the International Cryptozoology Museum in Portland, Maine, a federal nonprofit dedicated to educating visitors on the creatures.

Coleman and those like him don’t restrict cryptozoology to the more dramatic examples such as the Sasquatch or Chupacabra; they use the term to encompass the search for any previously undocumented or rumored animals based on regional sightings, folklore, and found evidence. “Because we’re involved in cryptozoology, we’re very forcefully of the opinion that there’s more animals out there, and that there are unknown species being discovered every day,” he told me over the phone from his house in Maine.

Coleman may not be far off in his belief. One example often held up by cryptozoologists as an example of the field’s legitimacy is the coelacanth, a prehistoric fish long thought to be extinct, only to be accidentally rediscovered after a fisherman netted one while trawling off the coast of South Africa in 1938 (it swims agape across the ICM’s official logo). By definition, the coelacanth is a Lazarus taxon — a term for organisms thought to be extinct only to be later found living in the wild, and the closest cryptids have to an official taxonomy. A subtle but key distinction between cryptozoology and zoology, one could then argue, might be the motive behind a creature’s discovery, either through hopeful searching despite improbable odds for the former, or by pure chance and more mundane cataloging for the latter. 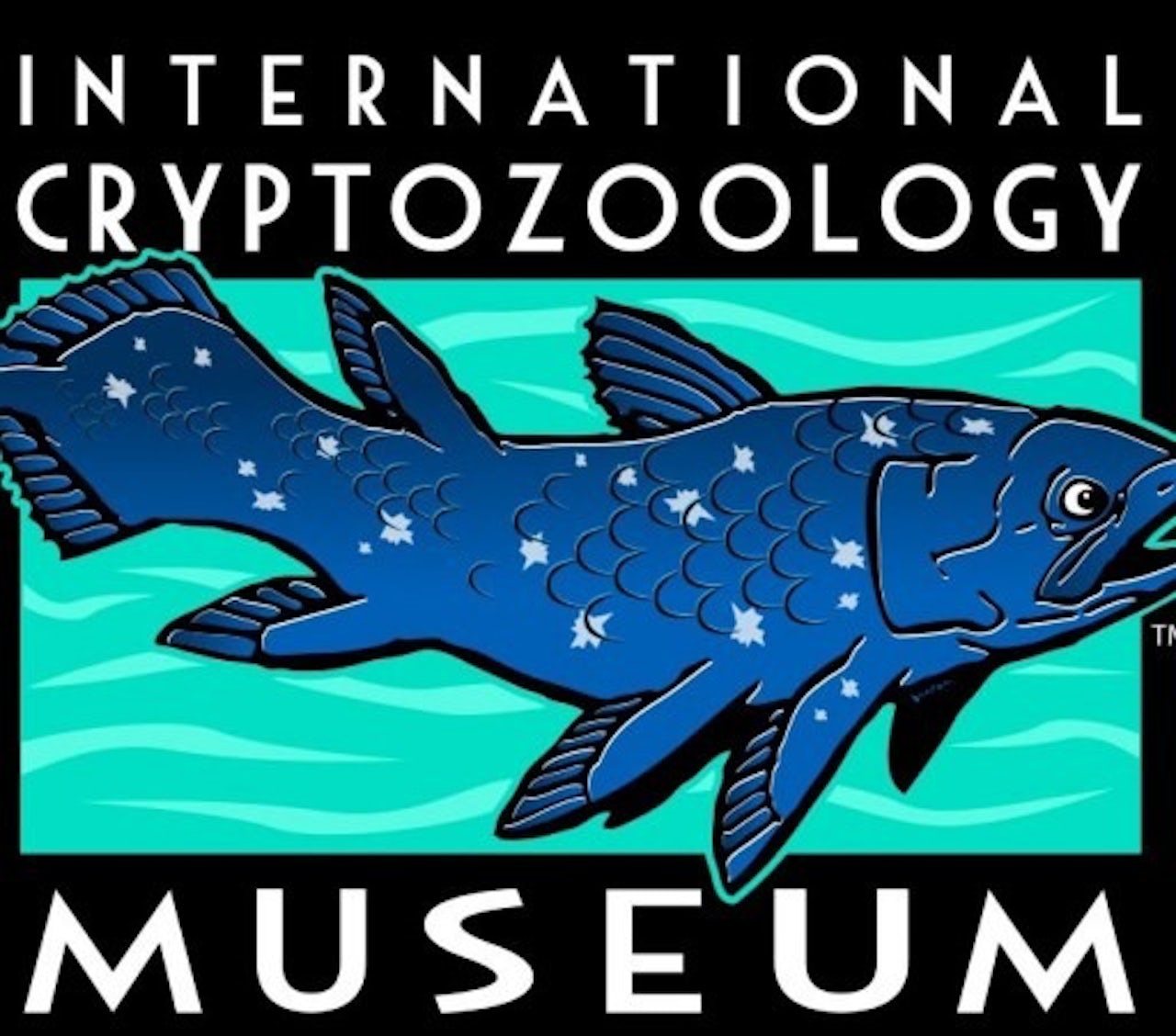 The ICM logo, featuring the coelacanth.

Among recent cryptozoological finds, scientists discovered traces of eel DNA within Loch Ness earlier this summer, suggesting that there potentially was a strange beast in the Scotland lake, and that someone might have seen a massive eel at some point and declared it a “monster.” Researchers this spring filmed some of the most striking footage of a giant squid so far, a creature long belonging to ship-faring folklore for centuries, only to be confirmed very much a reality within the past 150 or so years. Given that these cryptids turned out to be (somewhat) real, then might Sasquatch be somewhat real, too?

If Sasquatches are real, then they would be by no means immune to the effects of climate change. The creatures are most closely associated with the remote forests of regions such as Appalachia and the Pacific Northwest, areas which are at increased risk of wildfires, rising temperatures, and severe shifts in flora and fauna populations. It’s possible that these rapid changes might prove too much for these areas’ Bigfoot populations, and that the cryptids would go extinct before we could get our hands on one. Alternatively, if they’ve survived this long without us actually confirming their existence, they might just be resilient enough to make it through our looming ecological disaster. And if that happens, the drastic environmental changes could lead to Bigfoots popping up all over the place and coming into their own as a legitimate Lazarus taxon.

It’s debatable just how much the cryptozoological community contributes to the thousands of flora and fauna species that are found each year, especially when compared to the work of actual in-field zoologists and the blind luck of enthusiastic amateurs. But Coleman argues otherwise. “Cryptozoology is really based on science and the sciences,” Coleman told me.

Climate change is on the minds of those who visit the International Cryptozoology Museum, Coleman told me, and most questions related to the topic have to do with sightings of non-native animals in various areas of the country. “Somebody comes in and they say, ‘Well, why am I seeing rattlesnakes this far north?’ Or, ‘Why is the Virginia opossum being seen in Maine now?’ All we have to do is say, ‘Well, that’s climate change. Apparently, it’s warmer up here [now],’” he said. “Usually, people’s jaws’ just drop when confronted with the notion [that it’s] not an out-of-place, teleported animal. That’s an animal that is extending the pattern of its range based on approaching, changing climate.”

It’s possible that places like Coleman’s International Cryptozoology Museum could serve as a learning tool for children, a way to ease them into understanding and caring about something so dire as climate change. Meanwhile, for those who accept cryptids’ existence as incontrovertible a fact as climate change (there’s certainly a healthy population of them who don’t), it stands to reason climate change’s dramatic effects could influence cryptids of all sorts.

There is one cryptid for whom climate change may very well prove to be a boon — in a sense, at least. That would be the chupacabra, arguably the best-known cryptid after Sasquatch and the Loch Ness monster, which is said to roam the American southwest as well as Latin American countries, preying upon livestock and pets. According to Benjamin Radford, a folklorist who has written a book on the beast titled Tracking the Chupacabra, the form the chupacabra takes depends on the region. “The original, first seen in Puerto Rico, looked like an alien,” he told me via email, continuing, “In the common American version [of chupacabra stories], they are typically hairless dogs and coyotes.”

Radford added that per to his research, “Many of the [American] chupacabras are actually animals with sarcoptic mange that are mistaken for monsters when their fur falls out.” In colder climates, he explained, animals suffering from such ailments quickly succumb to the elements, while in warmer areas like Texas, they have a greater chance of living long enough to be falsely identified. “I call Texas a chupacabra factory because of that,” he wrote. As the deserts of northern Mexico and the American southwest expand thanks to climate change, the number of chupacabra sightings could very well go up.

As for Sasquatch, some cryptid researchers hold out hope that if climate change can’t be stopped, it may at least send Sasquatch populations on the move as they react to changes in temperature, rainfall, and migratory patterns in their prey, making it easier for humanity to make contact with one. “I think [climate change] would actually make it easier, right?” asked Chuck Geveshausen, founder of the Seattle-based podcast and online collective, Sasquatch Syndicate, during a separate interview.

Unfortunately, there aren’t any studies on time-lapse cryptid sightings which might indicate large-scale Sasquatch migration so far — the closest comes from data scientist and cartographer, Joshua Stevens, who mapped all 3,313 known North American Sasquatch sightings from 1921 to 2013. If nothing else, Stevens’ work appears to indicate that there’s been a recent drop-off in reports, suggesting that if Sasquatches are really out there, they might be feeling the effects of climate change, deforestation, and the commercialization of our forests in the same way that North American species of bears, birds, and deer are. I asked Geveshausen about cryptozoologists’ decision to pursue and conserve potentially nonexistent species, versus those that are categorically real and endangered.

“There’re a lot of animals out there that need protection, for sure. Not to mention the oceans and their contaminations, and all the pollution that’s happening there, as well. So, from a place of advocacy, you know, it’s all the same to me,” he said.

In this way, any cryptozoologist worth their weight in Sasquatch footprint molds should advocate for climate change action and reform, arguing that all creatures, both those we know and those we hope to exist, require our conservation.

“Certainly, [the Sasquatch] is considered an endangered species. In some counties here in Washington State, there are actually laws against poaching or taking one of these creatures out,” Geveshausen said, referring to Skamania County’s Ordinance No. 69-01, which prohibits the harming or killing of any “ape-like creature” or “sub-species of homo sapiens,” under punishment of up to five years in prison and a $10,000 fine.

Upon further research, however, it appears the county ordinance was more for the protection of humans from ourselves than the preservation of any unknown ape-men lurking in the surrounding woods. By 1969, two years following the release of the Patterson-Gimlin film — an early (now discredited) bit of documentary evidence of Sasquatch in the wild — those in Skamania and neighboring areas of the Northwest saw a massive increase in visiting recreational hunters hauling arsenals and looking to bag a Bigfoot. Local leaders passed the ordinance to deter any maiming or murder of other bipedal apes that might get confused with a wandering Sasquatch. Years after the number of curious hunters dwindled, Skamania officials passed Ordinance 1984-2, which demoted the crime down to a gross misdemeanor punishable by “a $500.00 fine and up to six months in the county jail, or both.”

Despite my sincere hopes and relative optimism for the future of our planet, the fact remains that humanity is currently killing off species much faster than we are discovering new ones. Finding the most improbable creatures while they still exist seems more and more remote.

I sometimes imagine a distant future on this planet dominated by someone else — whether they’re alien colonizers or a civilization that’s evolved from those pythons currently taking over the Everglades doesn’t matter too much — and wonder what they might think of us. Would we long be extinct, with only traces left behind for them to excavate and attempt to understand? Would there be nothing of us except rumor and legend, and would a few fringe members of this new society dedicate their lives to proving that the absurd myth that a group of bipedal mammals once nearly killed the planet was actually true? Or perhaps, some lone human will be discovered in the reconstituted wild, marvelled at by researchers as the ultimate Lazarus taxon, a real-life specimen of a monster long thought extinct.