Home Paranormal News Are we seeing ghosts because we’re lonely – or have they always... 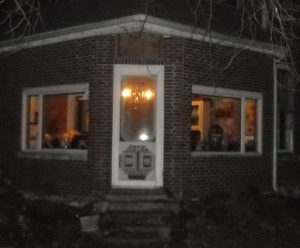 These are trying times. COVID-19 has altered lives, our habits and continues to play havoc upon daily routines. Those considering themselves “social” people have suddenly found a situation of self-imposed lonesomeness as Indianapolis, at what feels like a snail’s pace, returns to some sense of normalcy. Challenging times indeed! During these days do you suddenly now have ghosts to add to the mix? Maybe they’ve been here all along.

Freelance writer Molly Fitzpatrick has gathered some stories of “peculiar” surprises for some dealing with the pandemic, and opinions of what’s really happening behind the scenes: “For those whose experience of self-isolation involves what they believe to be a ghost, their days are punctuated not just by Zoom meetings or home schooling, but by disembodied voices, shadowy figures, misbehaving electronics, invisible cats cozying up on couches, caresses from hands that aren’t there, or in some cases – free-floating, full torso vaporous apparitions. Some of these people are frightened, of course. Others say they just appreciate the company.”

Many have self-isolated alone. Some have the luxury of doing it with significant others or family. However, there can be tension when you spend large amounts of time with others. Alone – or with others – these strange times seem to bring the spooks out of the woodwork.

According to one survey, 45 percent of adults believe in ghosts, while another found 18 percent have seen or had an encounter with one. Paranormal researcher, and former host of the TV series Ghost Stalkers, John E.L. Tenney, said in 2019 he received an average of two to five haunted house reports every month. That has now increased to five to 10 a week! Fitzpatrick stated,“Mr. Tenney has seen something like this before. In 1999, immediately before Y2K, he witnessed a spike in reported ghost and poltergeist activity, as well as UFO sightings (also on the rise in this moment).”

“It does seem to have something to do with our heightened state of anxiety, our hypervigilance,” Tenney observed.

In her research, Fitzpatrick quoted Kurt Gray, associate professor at the University of North Carolina: “Times of great unease or malaise, when there is an increased drive to find meaning in chaos, can lend themselves to perceived hauntings. Not to mention that disease itself shares certain psychological parallels with a ‘malevolent spirit’, creeping invisibly upon its unsuspecting victims.” Fitzpatrick added: “This phenomenon could also be a side effect of the loneliness of our time.”

“In quarantine, you are physically confined and also psychologically confined,” Gray stated. “Your world narrows. You’re trapped at home – you’re needing human contact – it’s comforting to think that there’s a supernatural agent here with you.”

Are these visitations only perceived, or the real deal?

Fitzpatrick reasoned that one can argue that the ghost puttering around in your kitchen is not only there, but that it’s always been there. Maybe you’re what’s changed, she said. Or maybe you’re listening more closely in the greater quiet all around us. John Tenney would agree: “Perhaps we’re just now starting to notice that the world is a little bit weirder than we gave it credit for.”

She recounted the story of Patrick Hinds, who one recent night woke up around 3:30 a.m. and went to the kitchen for a glass of water. Sitting at the table was a man in his 50s, wearing a worn World War II-style uniform. Hinds noticed the cap on his head. The apparition didn’t stay long.

Then, there are the other stories. …