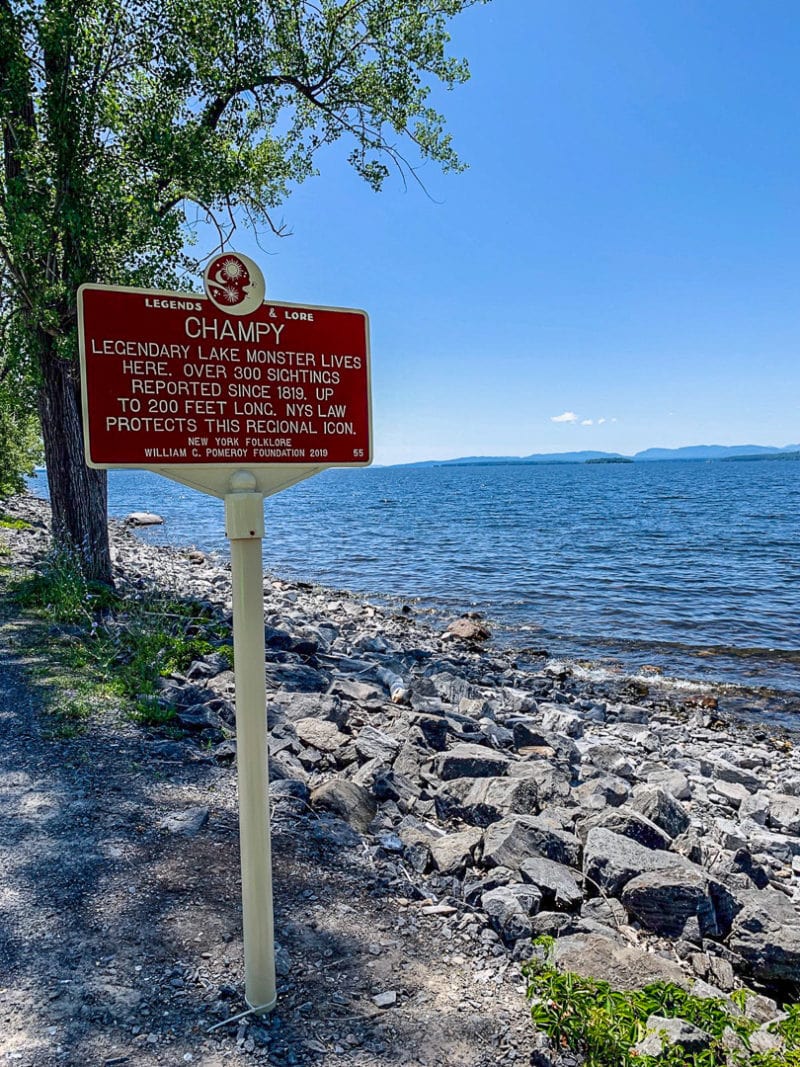 It’s an especially sticky day in late July on Long Point, a waterfront community on the shores of Lake Champlain in northern Vermont. The usually crisp New England air is thick with thunder, but even as droplets of rain begin to fall, Sue Lackey remains unfazed. The feisty Vermonter has spent her summers vacationing here for nearly 40 years and she’s eager to talk about one thing: the day she saw Champ.

Like the Loch Ness Monster, its more famous Scottish counterpart, Champ is a legendary creature that’s said to live in the waters of Lake Champlain. The roughly 120-mile-long freshwater lake briefly enjoyed the honor of becoming the sixth Great Lake before its title was stripped after just 18 days. The still-pretty-great lake forms the boundary between New York and Vermont before heading north into Quebec, where it joins the Saint Lawrence River and ultimately empties into the Atlantic Ocean.

Lackey gestures toward the lake’s increasingly choppy waters from her porch. “My husband thinks I’m crazy,” she says, chuckling. “But of course he was in the boat with me when we saw Champ.”

In the summer of 1981 or 1982 (Lackey and her husband, Steve, disagree on the exact year), the newly-married couple was enjoying a cruise on their boat on a hot afternoon with “no waves, no wake, no wind, no storm,” according to Lackey. As they coasted near the New York shoreline just north of Bulwagga Bay, Lackey says something silently and unexpectedly came out of the water.

“It wasn’t a hose, it wasn’t an eel … it was something that humped,” she says, making a cresting, wave-like gesture with her hands. “It was rounded and you couldn’t see under it. It came up and down into the water again, and then there were two of them, and then there were three of them! And I said [to Steve], ‘That’s Champ!’ He just sat there and looked at me and he said, ‘Hmm, perhaps we should go home.’”

Lackey laughs and slaps the table for emphasis. “I tell anybody who will listen because I know what I saw.”

Lackey is far from the only person who says they have spotted the mythical creature. Hundreds have claimed to catch a glimpse of Champ, with sightings logged as early as the 1800s. Some folk tales go back even further, including the ultimately discredited account by Samuel de Champlain. In 1609, the lake’s eponymous explorer is said to have recorded a “20-foot serpent thick as a barrel, and a head like a horse.” However, when his journals were translated in the late 1800s, it was revealed that he was referring to a type of freshwater fish and the so-called sighting may not have even taken place in Lake Champlain.

Kyle Miller and Andrea Anesi run Home of Champ, a Port Henry, New York-based souvenir and memorabilia business highlighting all things Champ. They share another origin story that dates back even further:

“A Native American princess by the name of Bulwagga lived with her tribe in what is now Big Hollow [also known as Coot Hill, located near Port Henry]. She had two suitors. The spurned suitor threw her from a cliff into what is now Bulwagga Bay, whereupon she drowned. Stricken with remorse and grief, the warrior picked up two large stones and threw himself into the lake. The angry fates change him into a huge sea monster destined to call every mourn for his love. The Native Americans, hearing him call out ‘Bulwagga’ every dawn, eventually gave him that name.”

Today, a large sign near Bulwagga Bay lists sightings dating from 1609 through 1990. The most famous “evidence” of Champ is the Mansi photo, snapped by Sandra Mansi in the summer of 1977. Its authenticity remains hotly debated among cryptozoologists and scientists, but hoax or not, Mansi opened the floodgates for Champ hunters and fans.

Reports of Champ activity has slowed down in the past few decades, but sightings have been reported as recent as this August. Katy Elizabeth, longtime Champ hunter and author of Water Horse of Lake Champlain, a cryptozoological biography of Champ, captured underwater sonar images she hopes will act as the first indisputable evidence of the fabled creature.

Despite the fact that his very existence is still in question, Champ fever is raging in the areas surrounding the lake. There are car washes, sports teams, and various other businesses named after the beloved character. Champ Day is an annual parade and festival, and there’s even a Champ-themed gift shop in West Addison, Vermont.

Earlier this year, Michael Cashman, the town supervisor for Plattsburgh, New York installed a Legends & Lore marker commemorating Champ, calling him a “regional icon” and “ambassador to [the] region.” This follows the 1983 legislation passed by the state of New York protecting Champ from “any willful act resulting in death, injury or harassment.”

Like most people, Cashman considers Champ to be a gentle giant and symbol of local pride, not just a silly hoax. He hopes the protections put in place will ensure the story continues to get passed on through the generations.

Home is where Champ is

There’s debate on the best place to look for Champ. The deepest part of Lake Champlain is between Charlotte, Vermont and Essex, New York. Lackey thinks this is where Champ has lived for hundreds of years.

“I firmly believe that he lives in the trough that goes 400 feet deep between Long Point and Thompson Point,” says Lackey. “There’s a long, narrow ridge—that’s the deepest part of the lake, so it makes sense.”

Since the southern end of the lake near Bulwagga Bay has a higher amount of reported sightings, the duo behind Home of Champ theorize that may be where he lives. But there’s another place where Champ’s been spotted—more than once and by more than one person. I head north to dive a little deeper.

When I arrive at Rick Laurin’s lakefront camp in Chazy, New York (located just across the border from Quebec), he has a framed and yellowed newspaper clipping ready to show me. In 2004, a family renting his camp claims to have seen a three-humped creature snag a seagull on a “very calm day.”

“I don’t know one way or the other,” he says with a smile, calling himself a skeptic who wants to believe. Laurin has never witnessed Champ himself, but thinks that the shallower waters between Lake Champlain’s islands may account for the number of sightings near the Canadian border.

“Anything going by the reef has to go over, so that’s why this place is probably so visible,” he says.

Laurin lists a half dozen friends and family, “credible people,” who’ve caught a glimpse of Champ over the years. One is his aunt Betty, who happens to live next door.

Her sighting also took place in the early 1980s. One morning before work, she happened to glance out her window toward the lake and spotted what she initially thought was a tree trunk or junk someone had dumped in the water. But as she watched the large shape, it silently disappeared below the surface without leaving a single ripple. She ran outside to see what had happened to the shape, but it was nowhere to be found.

She and Laurin both dismiss the theory that Champ is just a big fish, most often thought to be a sturgeon. Laurin explains, “Sturgeons are big, but boy, 40 years ago there weren’t a lot of big ones left. It’s a slim possibility.”

Laurin’s cousin Norman, who also lives in the area, claims to have spotted Champ on two different occasions, also in the early 1980s. “I’ve lived here all my life. I know there’s something there, but I don’t know what it is!” says Norman. He shrugs and spreads his hands open. “I saw something.”

Visitors to Lake Champlain need not worry—Champ is said to be a benevolent monster who mostly keeps to himself. For those hoping to catch a glimpse, taking a boat to the deepest part of the lake near Split Rock is a great place to start. Landlubbers will find plenty of Champ information in Port Henry, New York, the creature’s unofficial hometown. The Lake Champlain Maritime Museum in Vergennes, Vermont has a thorough collection of lake-related history and ephemera, and the Leahy Center for Lake Champlain (ECHO) in Burlington, Vermont—part museum, part aquarium—contains exhibits about Champ folklore.

There have been numerous scientific searches for Champ over the years, including sonar exploration and underwater sound recordings that can’t quite be explained—but humans have only explored a tiny fraction of the Earth’s waterways. Whether he’s real or not seems somewhat irrelevant to most people. “I think there is a desire in all of us to believe in a thing that defies the constraints of modern life,” says Miller.

And one thing is certain: There are definitely those who believe.

“Champ’s out there,” declares Laurin’s aunt Betty. “And he’s a big boy.”