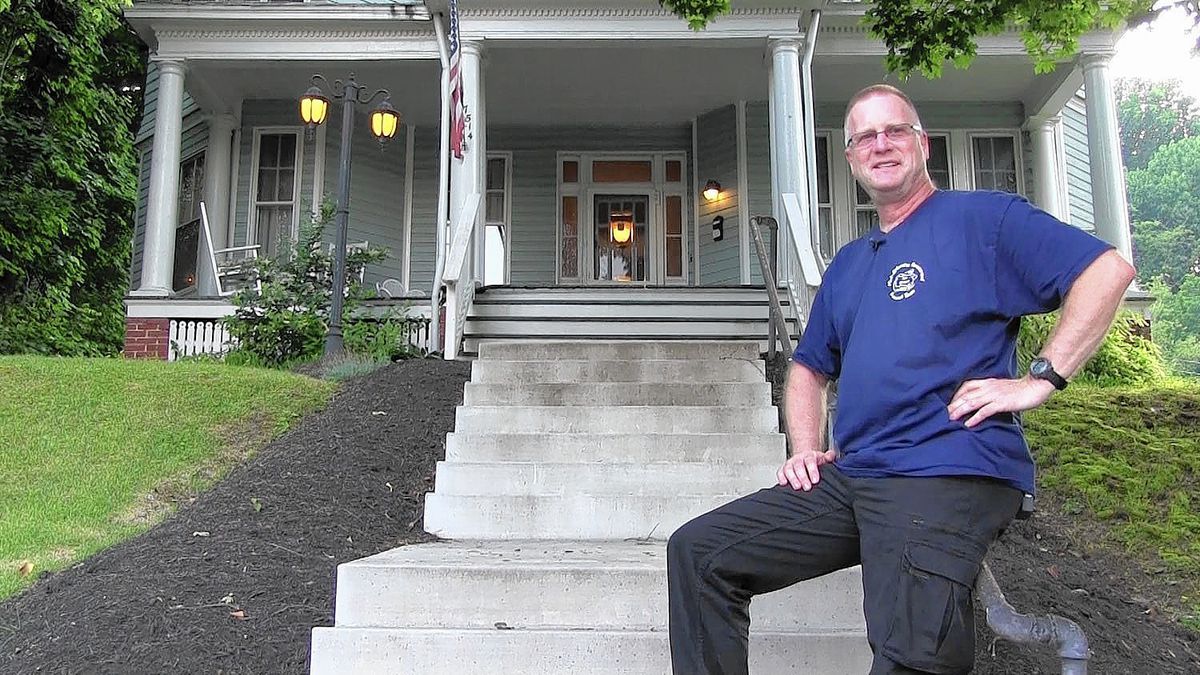 Scott Robinson was already a member of the Mid-Atlantic Paranormal Research Team when he claims that he saw an apparition while driving through Sykesville Main Street in January. A ghostly image of a middle-aged, well-dressed man garbed in Victorian-style clothing passed in front of his car then disappeared. Robinson dubbed him “the Dandy.”

After witnessing this startling figure, the Columbia resident decided to launch an investigation into the purported haunted sites in Sykesville. While researching the history of the town, he discovered the existence of a man who lived during the second half of the 19th century, a person who was commonly regarded as the most influential man in Sykesville. Often described as impeccably dressed in the latest fashion, Wade H.D. Warfield owned a significant portion of the town and represented Carroll County in the state Senate.

Robinson believes it was Warfield’s ghost he saw that cold January night.

“I’m not a firm believer but I’m not a doubter either,” Robinson said. “We actually debunk a lot of places we visit, but we’ve found some incredible stuff that we just can’t explain.”

After the team’s initial research, they began investigating sites in Sykesville in earnest. So far, they have documented six buildings and businesses in the area. Robinson said he didn’t want to name any of the locations for fear they could attract the wrong type of visitors, such as vandals.

They had planned on visiting the Town House and the abandoned buildings in the Warfield Complex and Springfield Hospital Center, but were unable to gain consent from the town due to liability issues. Some of the buildings are in very poor shape, Robinson said.

The team is currently looking for a few more places to include in the investigation, and is planning on releasing a DVD documentary by December, Robinson said. This time frame depends on how quickly team members can find places worthy of investigation.

The DVD is being funded entirely by the team members. Their goal in producing the documentary, Robinson said, is not to make money but to show there are things happening that current scientific theory and technology cannot explain.

The purpose of everything the team is doing is to one day lay all the questions surrounding these phenomena to rest, Robinson said.

The Mid-Atlantic Paranormal Research Team was founded in late 2006 by Jimmy Griffith, of Frederick. He was an avid fan of the popular ghost-hunting shows on television and found a wealth of information online from many groups doing the same thing.

Fascinated, Griffith said he wanted to try conducting his own investigation.

After speaking with an acquaintance, he discovered a potentially haunted location just south of Chambersburg, Pa. During the Civil War, Confederate soldiers raided a farm and killed the owner. Griffith contacted Robinson and the other founder of the team, John Jones, and equipped with just a digital camera and two voice recorders, they proceeded to document the site.

Since that first investigation, the team has grown to eight members, each with a different background and set of skills, but all are dedicated to the hobby, Robinson said.

The equipment the team uses has also changed.

The piece with the biggest bang for your buck, Griffith said, is the digital voice recorder. Fairly inexpensive and easily transportable, these devices are capable of recording electronic voice phenomena, otherwise known as EVPs.

Oftentimes, this sort of qualitative evidence is the most reliable data collected — and therefore hardest to debunk. It is easy to ignore rumors, but evidence like this is hard to explain, he said.

Another device used by the team is the MEL meter, which measures fluctuations in the surrounding electromagnetic field. The theory behind the device is that any spirit attempting to manifest requires large amounts of electrical energy. A digital display and series of lights on the MEL — from green to red — measure any abnormalities in the atmosphere.

“If you have this thing sitting in the middle of the room with no electronic signals in the area and it goes off, the theory is that an entity is trying to manifest itself,” Griffith said.

Unfortunately, the MEL can be unreliable at times, he said. Common electrical devices such as cellphones, televisions and radios will also affect the EMF readout from the MEL. This radio frequency interference makes it necessary to turn off all such devices while the investigation takes place.

Another piece of equipment, designed by Robinson, is the EMF pump, which was designed to stave off a common problem encountered by the team.

Often, while conducting an investigation, the battery life of their equipment will drain much faster than expected. The theory, Griffith said, is that the entities present absorb their equipment’s battery power in an attempt to manifest. The pump sends out electromagnetic pulses or bursts that can attract these manifestations and therefore conserve battery life so they can actually record it.

Digital cameras are used to record any visual manifestations, and infrared illuminators are attached to record images in the infrared spectrum, which human sight cannot register, Griffith said.

Another theory states that cold spots are created where these manifestations take place. The team has devices that measure the ambient air temperature and have found considerable fluctuations. They have measured as much as a 10-degree drop in temperature from room to room, Griffith said, and sometimes these pockets of cold air move within the same room.

“We aren’t sure of the correlation, or if there even is one, but it is interesting,” Griffith said. The team always attempts to debunk its findings, Griffith said.

Perhaps the most convincing evidence of paranormal activity in Sykesville was recorded by their infrared cameras. Though unseen while on location, once the team reviewed the footage, they saw a black, shadowy image that was in the vague form of a human.

“We have tried to debunk it, but we haven’t been able to yet,” Griffith said. “Some [sounds] have even shown up on the voice recorder that we didn’t hear at the time.”

Griffith said during the beginning of an investigation, once the equipment has been set up, the team spends a few minutes getting attuned to the atmosphere, listening for anything out of place. Robinson and Griffith both said they rely on their instruments’ readouts rather than their instincts, intuitions or beliefs; however, other members of the team believe their senses are often just as reliable, if not more so, than their equipment.

Lindsey Rego, of Sykesville, joined the team shortly after they began investigating the town. She said she believes a person will be more prone to sensing these manifestations depending on how open they are to the possibility of the existence of such entities. She believes, but cautions those who would accept everything without a proper investigation.

“So many people think, ‘Oh my god, I heard a bump, it must be a ghost,’ ” Rego said. “You can’t do that. Most instances can be explained as normal stuff, like a house settling, or a refrigerator turning on, or an electrical object setting off the EMF.”

When she begins an investigation she asks herself a series of questions. Does the atmosphere feel heavy? What sort of person do I sense? Are they negative or positive? Man or woman?

A few times, what she feels — particularly if she feels the presence of a person close by — has been backed up by evidence from the equipment, Rego said.

When big news breaks, be the first to know.

“I want to see it, I want to know, and I want to ask questions,” she said.

The existence of the paranormal is as real as the physical world, Rego said, and the proof of encounters just like the ones the team is investigating has existed from time immemorial. But no matter how conclusive the proof might one day be, some people may refuse to believe it, just like the moon landing.

“The history of religious experiences has been around forever, but not enough scientific research [has been conducted] to back it up,” Rego said. “Even if it is one day proven, people may still choose not to believe it.”

For questions regarding the Mid-Atlantic Paranormal Research Team’s investigation of Sykesville, or to report a suspected haunted site, visit the team’s website at http://www.maprtghost.com.