Rabbit Holes is a recurring series in which writers pay homage to the diversity and ingenuity of the ways we procrastinate now. To pitch your personal rabbit hole, email humaninterest@slate.com.

Years ago, my husband and I decided that we wanted to visit all of America’s national parks. (Twelve down, 50 to go!) While the natural beauty of each is unique, the small towns nearby invariably offer the same thing: a study in corporate America’s idea of a wholesome family vacation. Rocky Mountain Chocolate Factories dot Appalachian streets, manufacturing caramel apples sticky enough to ensnare bored children. Small businesses push the limits of copyright law with identical “May the Forest Be With You” T-shirts, and whole economies seem to run on pulled saltwater taffy alone. Estes Park, Colorado, a gateway to Rocky Mountain National Park, promises all this and more. Tourists can spot wildlife, sip local craft beers, or visit the Stanley Hotel, the inspiration for Stephen King’s The Shining. But as I browsed for souvenirs, it was not the Grady twins that caught my eye, but an image altogether more disturbing: Smokey Bear, beloved preventer of forest fires, looking, well, smokin’ hot.

I rounded a corner in the gift shop and stopped dead in my tracks, puzzled, staring. Racks of Smokey Bear merchandise stared back at me, pecs and all. An ursine Brawny Man. Was it just me? I turned to my partner, who had no choice but to agree. Scientifically speaking: Smokey Bear, please snap me in half. He’s objectively hot, and it’s time we all stopped pretending otherwise.

But was Daddy Smokey always this hot? Was his glow-up engineered to persuade? And who is this for? Depicted as a loving uncle, ally of the trees, and rustic mountaineer, Smokey reminds us of our individual responsibility to protect America’s great wildernesses. With a recent uptick in disastrous forest fires, almost 85 percent caused by humans—particularly humans celebrating the presumed gender of their fetuses—perhaps the U.S. Forestry Service decided ethos and pathos weren’t enough. Perhaps it was time to try libidos?

Scientifically speaking: Smokey Bear, please snap me in half.

The history of Smokey goes back to 1944, when artist Albert Staehle was first commissioned to paint the now-ubiquitous bear. Early depictions show an anthropomorphic creature with typical ursine musculature, jolly and potbellied. The Smokey of the midcentury is a rustic everyman, relatable and convincing. He never misses church and speaks with a molasses-licked Southern drawl in radio appearances. Around that time, in New Mexico, an orphaned bear cub was rescued from a wildfire. Named “Smokey II,” he recovered from his burns and lived the rest of his life at the National Zoo as a beloved icon. After a pivot away from Smokey in the 2000s, the Ad Council released a sexless 2019 animoji campaign for the bear’s 75th birthday, making him the longest-running public service announcement in our nation’s history.

Even now, as I look through the Ad Council and South Carolina Forestry Commission archives, there isn’t a clear point where Smokey trades in dad bod for dead lifts. But the Smokey Bear Bae I saw in Estes Park definitely had traps, lats, and tris. The word brolic comes to mind. I didn’t imagine it—I saw it in the wild. Like a crazed cryptozoologist, I waved my blurry photographic evidence around at skeptical friends as proof. He was real, and I had to figure out where he came from. And then it finally clicked. All of the posters of Hot Smokey were born of a single source: the Landmark Project, a South Carolina–based print shop.

Established in 2007, the Landmark Project describes itself as “a brand that celebrates the outdoors with an art-forward approach.” Founded in a spare bedroom by artist and printmaker Matt Moreau, the brand has expanded and picked up national clients like gear shop REI. Its Smokey Bear products are licensed officially through the U.S. Forest Service, and, according to its Instagram, the brand has donated over $300,000 to forest fire prevention. Browsing through the web store, you’ll find apparel, posters, and stickers mostly dedicated to national parks and landmarks. A few shirts feature wildlife, but none of the bison or wolves was a thirst trap; swoleness is reserved for Smokey, the lone anthropomorphic character that the brand portrays. When I gently approached with my suspicions, careful not to let my thirst for Smokey spook him, Moreau kindly directed me to the illustrator of the poster series, Cory Godbey, whose pencil-illustrated style leans mostly toward the fantastic.

I reached out to a good-humored Godbey, who explained that Smokey’s hotness was unintentional. “It didn’t occur to [him] until somebody pointed it out” on Twitter. (I was unable to locate the tweet, but to Godbey’s recollection it said “daddy smokey is hot.”) The reactions surprised him, but “it’s been fun to see people’s response” to the work, he said. He laughs as he admits that, “yeah, Smokey’s been working out,” but as he researched design references, he was more drawn to “the gentler side of Smokey,” carrying small animals to safety and protecting the forest. With a lethal combination of wide shoulders and emotional availability, it’s no surprise that Godbey’s version of Smokey is a heartthrob.

As I kept scrolling through the Landmark Project’s web store, I came across a bewildering sticker, done by a different artist: Smokey shows off a garden of wildflowers above the text “I think I love you, Smokey Bear.” This, I felt, was moving a little fast. Hot Smokey I can handle, but commitment? No, thanks. Nobody professes love for McGruff the Crime Dog. A little hasty, even for Rosie the Riveter. I’m hard pressed to find another PSA that I feel any strong emotion toward, much less love. Is the Landmark Project OK?

So although a muscular, trim Smokey is a recent innovation, being horny for Smokey is nothing new. And that must be somewhat on purpose, given that this lusty icon was engineered, focus group–ed, and market-tested. Maybe Smokey’s creators followed the Axe body spray line of thinking, hoping that men would see fire prevention as a symbol of masculinity. Or perhaps a string of unsatisfied housewives was responsible for the majority of 1970s forest fires. Whatever the reason, it’s a relief that my thirst for Smokey isn’t totally novel or unfounded, and was almost certainly intended by those who signed off on the 1977 ballad. And, as Godbey’s Smokey posters expand to retailers nationwide, he’s grateful for the chance to add a piece to the bear’s storied legacy, one in which we can finally acknowledge that Smokey Bear is both a savior and a snack. Makes sense, I guess, that the best fire prevention would be a tall drink of water. 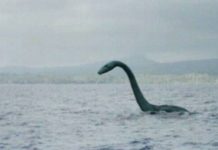