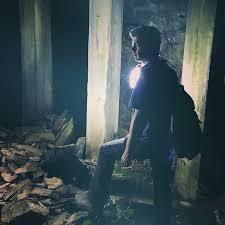 As part of Dread Central’s ongoing virtual panel series “Dissecting Horror,” we are excited to announce a live panel discussion on Wednesday, January 13th at 4 pm PST / 7 pm EST with the team behind the paranormal documentary series Hellier.

Greg and Dana Newkirk had been paranormal investigators for many years when Greg received a mysterious email in 2012 from a man claiming that goblin-like creatures were terrorizing his family in a small town in Kentucky called Hellier. After exchanging emails, the man disappeared. For the next few years, the case became even stranger. In 2017, Greg and Dana assembled a group of researchers, including paranormal investigator Connor Randall and director Karl Pfeiffer, who said he was drawn to the case by a series of synchronicities. The team travelled to rural Kentucky and what they uncovered led them on a journey that is both fascinating and mind-bending, causing them to realize that the case is much bigger than they could have ever imagined.

If you haven’t seen Hellier yet, I highly recommend you check it out before the live panel. You can watch both season one and season two Free at hellier.tv.

“Dissecting Horror” with the team of Hellier will be streamed live on Dread Central’s Facebook page and Twitch channel. The panel will also be made available on our official YouTube channel.

Greg Newkirk is a full-time paranormal researcher who has conducted groundbreaking research on everything from alien abductions to hauntings. He is the co-founder of the Traveling Museum of the Paranormal & Occult and is world-renowned for his work in cryptozoology, parapsychology, and paranormal research. Greg is featured on television shows like Travel Channel’s Mysteries at the Museum and Animal Planet’s Finding Bigfoot.

Dana Newkirk is a practicing hedgewitch, and like her husband Greg, has over two decades of experience researching cases of the unexplained. She is the co-founder of the Traveling Museum of the Paranormal & Occult and serves as head curator. She began her career by forming the first-ever all-female paranormal investigation team in the nineties. Dana gives tarot readings, interactive lectures, and hands-on workshops to share her extensive knowledge on things like divination, conjure and rootwork, and practical magic. She is featured on television shows like TLC’s Kindred Spirits and Destination America’s Paranormal Lockdown.

Karl Pfeiffer has always been fascinated with the unexplained and began ghost hunting while in college and appeared on Syfy’s Ghost Hunters Academy and Ghost Hunters International. After that, he served as the Resident Paranormal Investigator at the Stanley Hotel for five years. While there, he directed and edited the webseries Spirits of the Stanley for the Dark Zone web network and conducted 250 investigations on the property. He has studied mysticism and performed research into all aspects of the paranormal. Karl is also a portrait and conceptual photographer based out of Northern Colorado, and he’s written two books.

Connor James Randall is a musician and paranormal researcher and works a seasonal job at the Colorado State Capitol. He also tours the country and plays drums in the downtown Denver scene, with his punk-rock band, The Ghoulies. He became a seasonal tour guide at the Stanley Hotel, which led him to become friends with Karl Pfeiffer, and also led to a permanent role as a Resident Investigator on the property. Connor was featured in Spirits of the Stanley and, with Karl, became well-known for his work channeling spirits through their original experimental Spirit Box technique they dubbed The Estes Method.

We hope you’ll join us for the Hellier “Dissecting Horror” panel on January 13th! Let us know in the comments below or on Facebook, Twitter, or Instagram! You can also carry on the conversation personally with Michelle Swope @RedheadfromMars and Marcos Codas @MarcosCodas on Twitter!