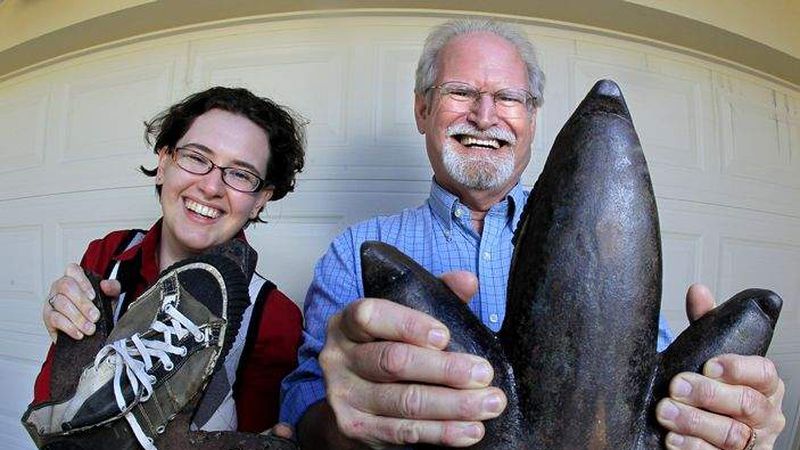 When Tony Signorini died last year, he left his son Jeff an unusual legacy — one that shows what a deep impression he made on the Tampa Bay area’s history.

It also demonstrates how difficult it can be for sons to follow in their father’s footsteps.

The story behind the Signorini legacy dates to February 1948, when Clearwater was a sleepy village of 15,000 and the beaches were covered by sand and sea oats, not condos and T-shirt shops.

One morning a beachgoer discovered strange, three-toed footprints in the sand. They waded ashore, continued for 2 miles through the dunes and then disappeared back into the surf. The prints were huge — 14 inches long and 11 wide. Whatever left them appeared to have a stride of 4 to 6 feet.

Soon the mysterious tracks appeared on other beaches, from Honeymoon Island to St. Pete Beach. The local papers ran photos of patrolmen squatting over a big footprint, looking baffled.

“Are the tracks really those of some weird, gigantic animal, a water-dwelling monstrosity that time forgot?” a Times article asked.

Public reaction split between door-barricading panic and a puzzled skepticism. If some monster were leaving these tracks, what sort of mayhem could this creature cause? But if it was a hoax, why go to so much trouble?

The reports attracted the attention of a New York zoologist named Ivan Sanderson who, unlike most scientists, “was always looking for something that would rocket him into stardom,” said his biographer, Richard Grigonis.

Sanderson had parlayed several African jungle expeditions conducted for the British Museum and Cambridge into a best-selling book, then became the first person to display live critters on television. He also coined the term “cryptozoology,” meaning the search for legendary animals such as the Loch Ness monster.

On behalf of the New York Herald-Tribune and NBC, Sanderson spent two weeks investigating what he called “Old Three Toes.” He interviewed witnesses and examined plaster casts of the prints. When tracks appeared along the Suwannee River 100 miles north of Clearwater, he even dug up one to take home.

This, he concluded, could not be a hoax. The impressions in the sand were too deep to have been made by a man or a machine. In fact, he said he’d seen the thing himself while flying over the Suwannee. Old Three Toes was grayish-yellow, about 12 feet long, with large, flipper-like arms. It made big waves, as if kicking with powerful legs.

So was it a swimming dinosaur? A giant alligator? No, Sanderson argued, it was a big bird. Really big.

“The imprint is, in fact, very much like that of a vast penguin,” he wrote, although admitting the idea of a 15-foot penguin in Florida sounded “balmy.”

The tracks of the Giant Penguin — or whatever it was — reappeared a few more times, but 1958 marked the last anyone saw them.

Thirty years passed. In 1988, a Times reporter was interviewing a pair of local missionaries when they told her she should talk to Tony Signorini. Longtime friends of his, they urged the reporter to ask what he was hiding.

When the writer showed up at Signorini’s automotive repair shop, he pulled a box from beneath his work bench and showed her a pair of feet.

Iron ones. With three toes.

There never was a Giant Penguin. Signorini was “Old Three Toes.” The whole thing had been a hoax dreamed up by his former boss, Steven “Al” Williams, a notorious prankster.

According to Signorini, in 1948 his boss had seen a photo of a fossil dinosaur footprint in National Geographic. After studying it, Williams announced he and Signorini could have some fun.

They designed feet to match the photo, then had them cast in iron. They bolted a pair of high-top sneakers to the iron feet, loaded them into a rowboat and headed into the Gulf of Mexico.

Signorini slipped on the feet of what he’d come to think of as “Dinny the Dinosaur,” tied the sneaker laces, then stepped out into shallow water and set off down the beach.

To create the illusion of a long stride, Signorini would stand on one leg, swing the other one back and forth to build momentum, then take a leap.

Each foot weighed about 30 pounds. His son, Jeff, tried walking with them a few years ago and “I went over on my butt.”

For years after the prank, Signorini would pull the feet out and regale friends and family with the tale. By the time he told his story to a reporter, he was one of the few who remembered it. Williams had died in 1970. Sanderson, who after his Florida penguin pursuit went on to write books on Bigfoot, UFOs and the Bermuda Triangle, had departed this dimension in 1973.

Despite Signorini’s confession, some of Sanderson’s avid followers refused to believe he got bamboozled. In Chronicles of the Strange and Uncanny in Florida, author Greg Jenkins points out that there were eyewitnesses, including Sanderson, who said they saw the creature.

However, three biologists consulted by the Times for this article agreed that what Sanderson saw was most likely a manatee. As for the others, Jeff Signorini said Williams put some friends up to calling in fake reports.

Last year, Tony Signorini died at age 91. His family made sure to mention in his obituary that, along with being a World War II flight engineer and a pillar of the St. Cecilia Catholic Church, “Tony was famous for being ‘The Clearwater Monster,’ a hoax that made national news.”

Jeff Signorini had spent 25 years working with his dad at Auto Electric, so he inherited the feet. He considers himself a jolly joker just like his dad, but admits he’s never pulled off anything as spectacular as the Giant Penguin Hoax.

Two historical groups have asked him to donate the feet, suggesting they deserve to be on display, he said. On the other hand, he said, his dad wanted to keep Dinny in the family.

Recently a documentary crew asked him to bring them out to Honeymoon Island so they could shoot a show about the hoax.

The crew members pushed one of the feet into the sand to make some three-toed tracks. Then a producer had to stand by warning beachgoers not to walk over them. The crew didn’t want anyone putting real footprints over their fake footprints.

Signorini and his niece, Alyssa Premru, stood by with bemused expressions. Later, strolling back to the parking lot, Signorini admitted he has not decided whether to donate or keep them.

“I’m still thinking — thinking about what to do about the feet,” he said.

Premru, walking by his side, piped up: “Can I call dibs?”

Staff researcher Caryn Baird contributed to this report. Craig Pittman can be reached at craig@tampabay.com, or on Twitter @craigtimes.