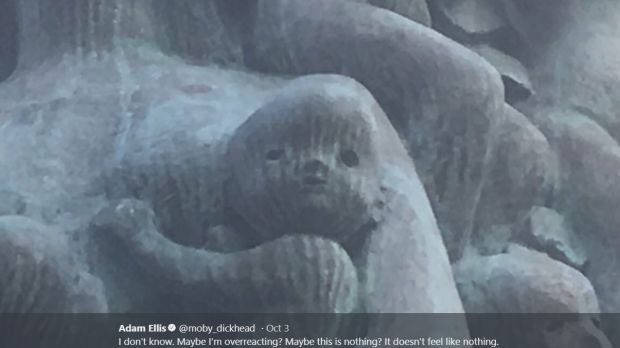 Haunted Ireland by Tarquin Blake (Collins Press, 2014) is an absorbing Halloween read and a guide to the spookiest places to visit in every hidden dark place in Ireland tonight. It’s oiche shamhna – the Irish word for the night when the boundary between life and death vanishes.

Irish legends were telling of vampires, banshees and werewolves centuries before Hollywood ever heard of them. It’s said that the people of Ossory, an ancient kingdom, could change themselves into wolves and were drawn by Cambrensis in the 12th century, while the original beautiful female vampire (dearg-diulai) rose from her grave to seduce living men and drain them of their blood. She still haunts Strongbow’s Tree in Co Derry.

It’s not just a scary book – Blake’s delightful photographic story of the great houses, their battles and their embattled families is a must read for anyone interested in Irish architecture and history.

Tarquin Blake is an architectural explorer, photographer and author who has been collecting ghost stories for more than a decade and documenting our lost heritage. for more see abandonedireland.com

1. The Abbey of the Black Hag, Co Limerick

Hidden in a secluded valley southeast of Shanagolden, are the remains of a medieval convent where the prioress, a lady of the FitzGeralds from Shanid Castle, terrified the local population with her use of the black arts and sexual practices. The sacristy where she is buried is called Black Hag’s Cell after the blackness of her face when she died. Other reported ghosts include the Countess of Desmond who was buried alive in the Abbey, a mistake that came to light when her menacing ghostly figure prompted an investigation of her makeshift grave, where her finger bones were found to be worn out and ragged from clawing. Today her screams are heard throughout the ruins.

The battlefield is a vast cemetery still haunted by the screams of the massacred Jacobite army, numbering thousands of bloody, mutilated bodies and immortalised in Thomas Moore‘s poem Forget Not the Field. In 1691, the cold-blooded Williamites’ made Jacobean blood run down the hillside in thick oozing streams and the bodies of soldiers lay for more than a year until only their bones were left. One point in the field where blood gathered in large pools is still known as The Bloody Hollow.

Those who have seen the apparition of poor vain Lady Margaret – one of several ghosts that haunt the tower house – disagree over whether she has a face. In the 17th century, Lady Margaret Hodnett was something of a Jezebel with quite a number of suitors and an extensive collection of mirrors. Tired of being kept dangling, one of her men, Clon de Courcy, decided to starve her and her family into submission. After a year of this, the Hodnetts surrendered, but Lady Margaret had lost her beauty and was found surrounded by unburied corpses and skeletal beings. Rejected then by Clon, she smashed all her mirrors and to this day is seen wandering about the castle, a dark misty sphere around her shoulders, constantly rubbing at patches of the wall until they gleam like mirrors.

The ghost of a black Newfoundland dog has often been seen sitting at the base of a life-sized marble statue of Captain John Boyd in the Cathedral, and laying on his master’s grave outside. The dog chose to starve to death at the grave rather than leave his master, after one of the largest funeral corteges ever seen in Dublin. In 1861, Captain Boyd, accompanied everywhere by his dog at his heels, became a hero when he organised the attempted rescue of more than 135 ships and their crews wrecked between Howth and Wicklow heads during a storm. Dún Laoghaire, then Kingstown, was a scene of carnage with bodies and wreckage everywhere, yet Boyd lashed himself to his crew and went to sea in a futile attempt to save lives and was drowned with his men.

Some have seen an apparition staring from the mullioned windows of the ruined 19th century Tudor Revival house, known as Bruen’s Folly after Francis Bruen, who built it for his bride. But it’s an unfortunate servant girl who haunts it. On a stormy night, she was standing close to a window in one of the upper rooms to the east of the central porch tower when she was struck dead by lightning. The grim figure of her electrified body was burnt into the panes of glass for years after, until the house itself was burned down by the IRA. Yet even as the house crumbles, it is said that the apparition is seen staring through glassless windows.

The tortured echoes of ghostly inmates have been heard and even recorded in the abandoned asylum, built in 1798 by William Saunders Hallaran, author of the first book on Irish psychiatry and inventor of “Hallaran‘s Chair”, a rotating chair that spun the hysterical patient at 100 revolutions per minute. The derelict portion of the complex is said to be haunted by the desperate souls who ere condemned to live out their lives there. Paranormal investigators have seen ghosts of inmates and recorded their voices.

Abhartach, the original male vampire – and arguably the first vampire legend in the world – is buried here, standing upright and upside down. Abhartach comes from laght-abhartach, “sepulchral monument of the dwarf“, as this vicious blood-drinking black magic-practising monster was short of stature. The druids called him “red blood sucker” and said that he could not be killed unless he was pierced with a sword made of yew wood, then buried head downwards. The locals give the “bad ground” around his grave a wide berth, especially after dark.

A sinister figure on horseback, said to be the devil or one of his dark apostles, is still seen around the mansion’s crumbling walls. Edward Gill Croker, part of Cromwell‘s New Model Army, started with status in 1730 but his worthless, arrogant and uneducated direct descendents who spawned many dark stories had frittered the fortune away by 1869. One night a mysterious dark rider appeared from nowhere on the road by Edward Croker’s carriage and then men struck up a conversation, which resulted in a dinner invitation to Ballinagarde. When the drunken stranger collapsed in the morning, a servant removed his boots to reveal hairy cloven feet, and – later – hoof-marks seared into the floor by redhot feet. A Munster phrase, “as sure as the devil was in Ballinagarde”, is still used to say that something is fact.

The sombre phantom music of an organ or harmonium can be heard emanating from the spooky ruins of this castellated Gothic fantasy built in 1830 with numerous heads of humans and animals carved into it and destroyed by fire 100 years later. Also the location of numerous sittings of the banshee or Bean Si – fairy woman or the spirit of death – the house has been investigated many times by paranormal investigators and a TV show, Destination Truth. A spectral foxhunt also haunts the grounds, led by a hunting obsessed horn-blowing Duckettte who is often seen in the neighbourhood these days.

This lonely creepy hunting lodge in the Dublin mountains was the site of a satanic “club” whose members dressed as Satan, drank whiskey and butter from a caldron and may have eaten a servant girl alive. It was founded in 1735 by Richard Parsons, the ridiculously wealthy first Earl of Rosse and the first Grand Master of the Irish Freemasons, who gained a reputation as a sorcerer dabbling in black magic, using ancient Dionysian scrolls looted from the Great Library of Alexandria in 1270. He wrote a book, Dionysus Rising, and started the Sacred Sect of Dionysus to celebrate the joys of Bacchus and Venus, drinking and sex. This later became the Hell-Fire Club, where giant screaming black cats were captured, caged and roasted until after four days the devil himself appeared to grant their wishes.

This gaunt ruin is haunted by the menacing apparition of a red-haired girl, whose taunting cackles and screams are sometimes heard echoing from the walls. This is Red Mary, who dispatched her third husband by pushing him out a third-storey window and wed a total of 25 men, most of whom met early deaths in a similar fashion. The sadistic Mary kept a harem of young men disguised as maidservants while torturing her real female maids by cutting off their breasts and hanging them by their hair. This psychopath was eventually sealed alive by the locals into a hollow tree trunk where she starved to death.

Visited by the TV show Ghost Hunters and deemed haunted by their expert paranormal investigators, Seafield was the height of 19th century luxury until one of the sons, Owen, brought home Egyptian mummies from his travels, stimulating the interest of a particularly powerful poltergeist that would shake the house and shatter the ornaments. Terrified servants saw a menacing dark figure and Jesuit priests had to be called in to perform (failed) exorcisms. One of the Phibbs once fired a shot at IRA soldiers who were attempting to invade the house across the tennis court, which may or may not be as real a story as the dark figure seen wandering across the grounds and disappearing into Sligo Bay.

In June 1962, a photographs of the burnt-out and derelict castle were developed to reveal a person holding a sword and dressed in 18th c clothing, complete with thigh boots and hat, thought to be one of the Danish crew of the Golden Lyon, wrecked off Ballyheigue strand in the 18th c. The ship‘s €2 million in silver bullion resulted in a long-running conflict in which Crosbie family members were variously convicted, hanged and poisoned. Some believe the bullion is still buried there. Earlier residents, the Cantillon family, would leave their dead in coffins on the beach for the mermen to take. Local fishermen still believe they have seen the ruined walls of an old chapel beneath them in the water, and the flick of the sea king‘s tail in the waves.