Home Paranormal News ‘My throat was getting tighter…I felt I couldn’t speak and couldn’t breathe... 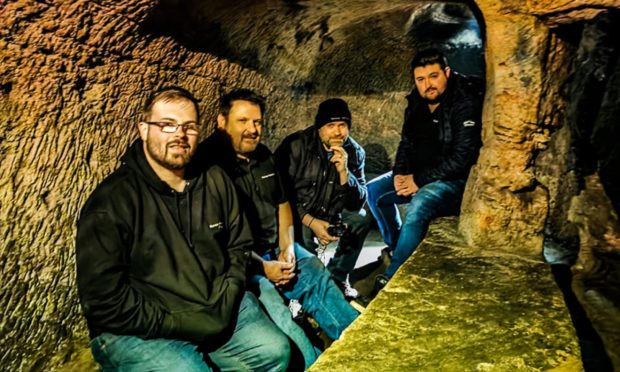 Are you troubled by strange noises in the night? Do you experience feelings of dread in your basement or attic? If the answer is yes, then who you gonna call? Michael Alexander speaks to a real-life team of Fife-based ‘Ghostbusters’ who have just won a prestigious award.

As a child growing up in St Andrews, Fife Council building surveyor Gregor Stewart had his grandad to thank for his early interest in the paranormal.

A master gold leafer/guilder who got called to work in places like Falkland Palace and St Leonard’s School, his grandad wasn’t a particular believer in the paranormal but would hear stories from staff about unexplained evidence of hauntings.

When he told these stories to 10-year-old Gregor, it spiked his interest in all things ghostly and prompted the youngster to spend more time hanging about the supposedly haunted ruins of the cathedral and castle.

Gregor thinks he saw the infamous ‘White Lady’ in the cathedral grounds once while visiting the Lammas Market one August as a child and, as an older teenager, had an unexplained experience near Witches Hill at the back of the now St Andrews Aquarium.

But while the now 50-year-old author of 16 paranormal books is a believer in “spirit energy”, he remains slightly more sceptical when it comes to the popular definition of ‘ghosts’.

“Do I believe in ghosts? That’s a difficult one for me to answer, purely because it depends on what you define as a ghost,” says Gregor, a former Canongate Primary and Madras College pupil who now lives in Cupar.

“A ghost is such a massive wide area to cover.

“But I keep saying –what is a ghost? You’ve got so many different types of ghosts. You’ve got poltergeists.

“I’ve come round a lot more. I definitely believe there’s something beyond this life – a spirit world.

“But exactly what that is I just don’t know. That’s partly why I do research, because I want to find these answers.”

Gregor had his first book published in 2011 and has gone on to write others including Haunted Kirkcaldy and Supernatural St Andrews.

He particularly enjoys the research side – going through all the old historical archives to find reports of unexplained incidents through the centuries but also trying to find any historic facts that back up why such sites are significant.

Since 2014, Gregor has been a member of Scottish Paranormal – a paranormal research team based in West Wemyss, Fife, which was founded in 2004 and which has recently been awarded silver for the best Ghost Hunting Series (Facebook) in the annual Higgypop Paranormal Entertainment Awards.

Higgypop was created in 2006 and has grown to be one of the largest websites dedicated to the paranormal and is now the number one site for reviews of paranormal TV.

Alongside Scottish Paranormal team founder Ryan O’Neill, of Kirkcaldy, Cupar-based chef Ally Reid and Greg’s son Kyle Stewart, 24, who works as a guide at St Andrews Cathedral and castle, Greg specialises in the research side.

Team members have appeared on several television shows including Brew Dogs, Help! My House Is Haunted, Most Haunted, Tough Gig and behind scenes of Ghost Hunters International (Scotland) and are also established authors of both paranormal and historical books.

In 2018, they set up a Paranormal Research Centre in a former shop in West Wemyss with the aim to provide a facility not only for them to grow their research, but to provide a place where those interested in the paranormal can meet like minded people.

As a team, they had become increasingly aware that people with an interest in the paranormal had few places to met.

Knowing it is sometimes a contentious issue, they sought to remedy this by establishing possibly the first physical paranormal club facility, somewhere where people can visit to meet and discuss their experiences, thoughts and beliefs in an open, safe environment.

However, away from the archives, Greg is also one of the team’s frontline investigators and it’s been on location while visiting ‘haunted’ sites that he’s had some of his most remarkable, unexplained experiences.

Take the time the team visited Inverary Jail and were setting up in one of the jail cells.

“Before we’d even really started, we were only just setting up, and I was starting to get a bit of a tickle (in the throat) which I didn’t think too much of,” he says.

“The other people that were with us were getting a bit concerned.

“We ended what we were doing and when we left it started to ease.

“But on the drive home we had to stop and I was physically sick at the side of the road.

“I don’t know what caused that but I’ve since spoken to other people who also say they’ve felt like they were being strangled in that cell.”

Gregor says there are two theories behind it. One is that it’s an evil spirit or a dark energy that’s trying to choke somebody out.

The other is that it’s the spirit of somebody who was strangled within the jail who is putting what he experienced on to visitors.

But as of yet nothing specific has been found in the archives to back it up.

Scottish Paranormal have also visited New Slains Castle in Aberdeenshire that has connections to Bram Stoker and was the inspiration for the castle in Dracula.

They’ve been to Ireland where they did the Hellfire Club, Mary King’s Close in Edinburgh and a few places in England as well.

They were meant to be going to Romania in 2020 to investigate Bran Castle. Unfortunately that’s been postponed due to Covid.

Closer to home, one of the most “active” sites they’ve visited is Balgonie Castle in Fife where they are the only research team to have been allowed in to the private residence having built up trust with the owners.

“That’s an absolutely amazing castle for its activity,” says Gregor.

“Balgonie is meant to have at least 13 spirits in the castle.

“It was awarded the 14th most haunted location in the UK last year by Higgypop.

“We’ve had a lot of experiences in there, particularly in the chapel area.

“There’s energy within the chapel area. But it’s quite protective to the extent it will force you out.

“We don’t know too much about it yet. We are still trying to work on it.

“We have been there with a psychic medium – a guy called Lee Dunn – who we trust quite a lot.

“When he was there he said whatever energy is there it’s shielding itself from him. It’s hiding it’s true identity and stuff like that.

“We’ve had an experience up in the Laird’s Hall which is the private chambers of the Laird of Balgonie. There’s been activity on the stairs particularly. I think every area of the castle we’ve had some activity in.”

Inevitably, comparisons are made with the ‘Ghostbusters’ of Hollywood fame – and they do get contacted by people wanting them to investigate unexplained events.

“When somebody is that close to what is going on, a lot have already made up their own minds,” he explains.

“So when you are telling something different it doesn’t go down too well.

“We are also very cautious that we don’t want to advise people to do something and it doesn’t work out for them. We’ve got to be a bit careful.

“What we tend to find with our own personal beliefs is that a lot of time when things are happening in your own private house, it’s some form of spirit energy letting you know it’s there.

“I’ve experienced this in my own house when things were going missing and things like that.

“Quite often simply saying it in your head and acknowledging that you know they are there and asking them not to be bothering you during the day and things like that  – that will be enough to calm everything down.

“It’s very rare to have anything nasty in the house. It’s just somebody wanting your attention – letting you know that they are there. Once you acknowledge them that’s it.”

Over the years, Scottish Paranormal have built one of the largest online following in the UK and livestream their series ‘Haunted Scotland’ several times a week and share video content on Youtube on their Haunted Scotland channel.

In addition to the Best Ghost Hunting Series, Ryan O’Neill, the founder of both Scottish Paranormal and Haunted Scotland, was shortlisted in the nominees for the award of Paranormal Unsung Hero, along side some of the largest names from across the globe.

They are currently working on a new series for Amazon Prime too which will be titled ‘Haunted Scotland’.

While the volunteers don’t do it for awards, Gregor adds that it’s a good feeling to be recognised.